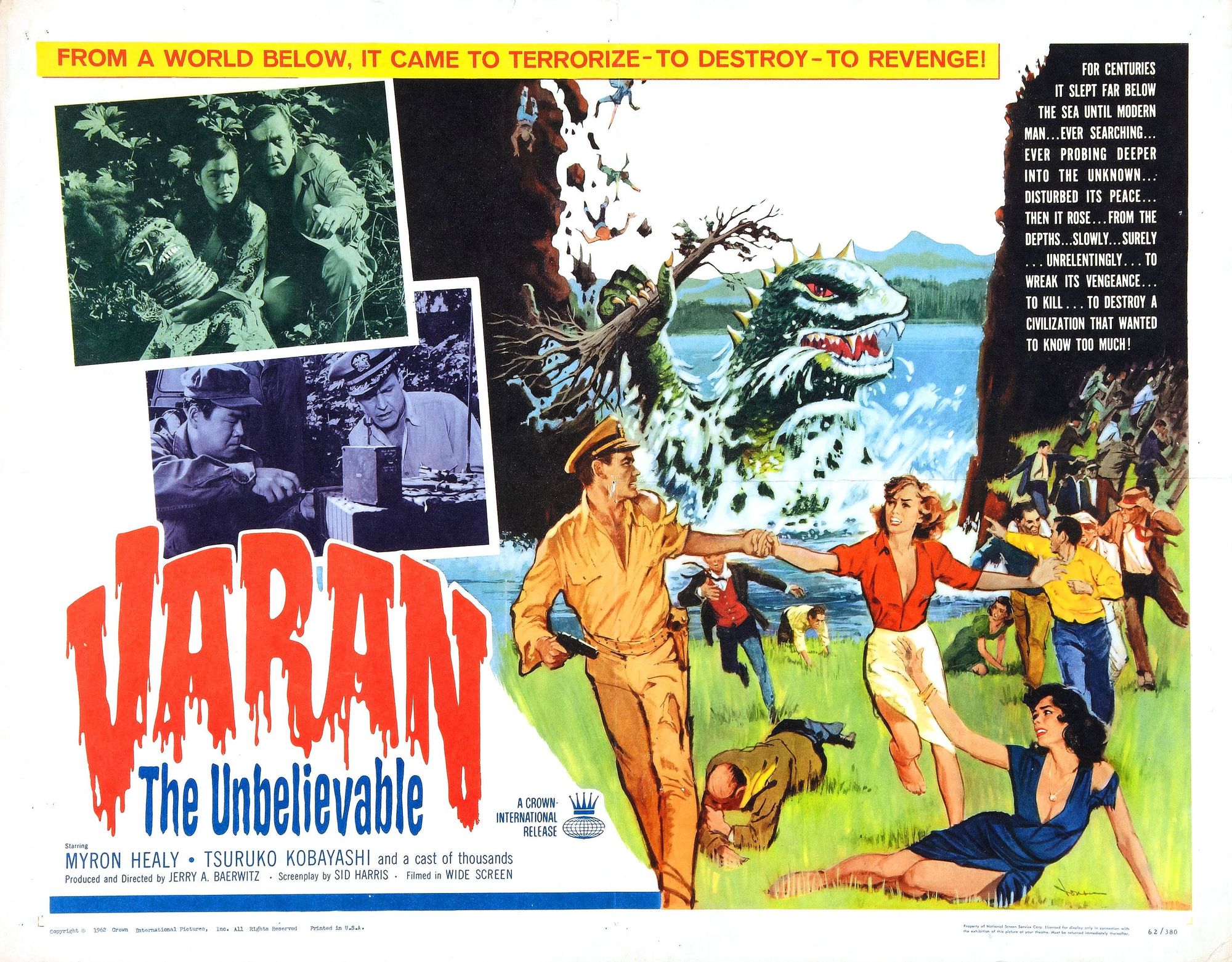 It’s time to look at an old classic in Varan The Unbelievable. Varan is a film that you’ve likely heard of if you’re a big Godzilla fan. On the other hand, if you’re not really into the Godzilla mythos then the odds of you knowing about this film are slim to none. It’s a very classic Kaiju film that plays it by the numbers. At its core the main point of the film is seeing Varan take on the humans, but I’d say that it’s a bit weaker than the average Kaiju film. The humans just aren’t that good.

The plot of the film revolves around a guy named Jim who heads to Japan to run some experiments. His tests involve potentially eroding the water supply of a nearby village so he tells them all they have to leave. Naturally the villagers don’t want to just pack up and go just like that so the army has to get involved. They send tanks and a lot of man power for this mission which increases tensions. Jim’s wife warns him that this is a bad idea, but he won’t listen to anyone. By this point his ideas are simply too important to him and anyone who says otherwise simply doesn’t understand his passion. There’s nothing that can stop him…nothing but Varan!

Varan is definitely a fun Kaiju. For some reason I always thought he looked a lot more like Titanosaurus, but his actual design is still pretty solid. Once he appears the film certainly becomes a lot more fun. He really takes it to the army and shows that he isn’t to be trifled with. Varan also lasts a very long time ad he doesn’t go down until the final minutes of the film. Even then it’s hard to say if they really destroyed him since that’s partially up to interpretation. He did lose though, which does mean he is one of the weaker Kaiju out there. Sure, the humans came up with their own special formula as per usual, but losing to the army is not something you want to do. Humans are pretty creative when they’re in a pack though so it’s no shame to lose to them.

What holds the film back is Jim. It’s impossible to root for him because his experiments were never justified. Why does he have to do them in this lake where a village is depending on the water source? Apparently there were other locations that he could have chosen so by the end it feels more like pride is the only thing keeping him there. He could have easily just picked a different spot when the inhabitants clearly told him to go away.

As the villagers escalate their attacks on Jim and Anna you’d think that Jim would finally consider leaving. Even Anna mentions that she is now scared of what may happen and the police chief hints that Jim should leave as well. Jim does nothing of the sort though so it becomes clear where his priorities are. Even though he manages to have a change of mind by the very end of the film it feels like it is too little too late. By then his character is already down for the count in my book.

The writing is pretty reasonable here. It’s not the best dialogue, but it’ll do. The film’s pretty quick and the pacing manages to keep up so the scenes don’t drag. I wouldn’t call the first 20-30 minutes without Varan boring, but I definitely would freely admit that they could have used a better cast. The action scenes are fun though. It’s pretty dusty in the climax so it can be hard to see, but it’s not like you need HD graphics to see that the government is firing a lot of shots at Varan. He shakes them off for a while, but every creature has its limit.

Overall, Varan The Unbelievable is a classic Kaiju film, but it doesn’t have the same level of charm as the others. It is interesting how different the plot seems to be between the sub and dub versions of the movie though. The character names are super different and the Wikipedia summary for the Japanese version seems like it might as well be a completely different film. I’d recommend checking out the English version if you want to see the impact that Jim has on the story. It may not be a positive one, but it’s an impact nonetheless. I’d recommend checking it out even if it wouldn’t be at the top of my list.