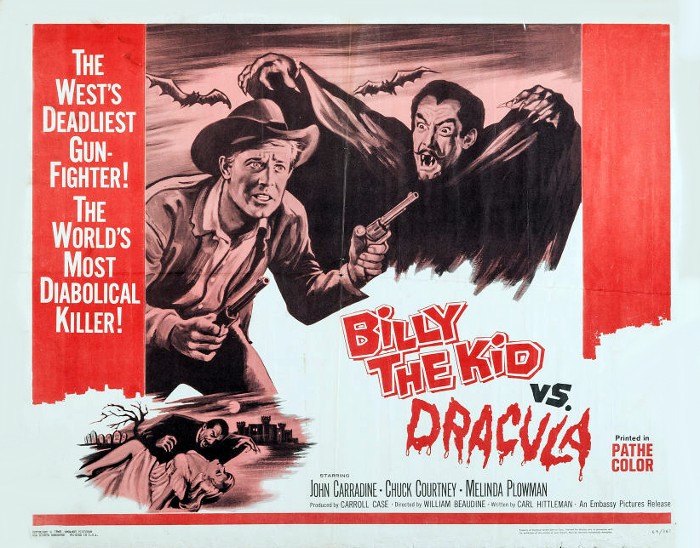 It’s time to look at a really old crossover. It’s definitely not a pairing that you would expect. I’d say that it works pretty well, but as expected Dracula does drag Billy down quite a bit. It’s just hard to make a good film involving a vampire and this one really seals the deal there. The film was so close to at least avoiding the animal violence curse, but it couldn’t help itself. It’s not too surprising since Dracula always goes after the livestock, but it hurts the experience all the same. The character cast isn’t the strongest either.

The film starts off with Dracula showing up and murdering a lady who forgot to open her hand to show off the cross. He then catches a break when Betty’s uncle dies and assumes his identity. He has decided to make Betty his bride and starts preparing this devious plan. Fortunately for Betty she has a friend known as Billy The Kid. He used to be an infamous outlaw, but now he works for the common good. The mother of one of the victims is named Eva and she warns Billy that the uncle is actually Dracula. Billy tries to convince Betty of this, but she won’t hear it. How could her uncle…who she has never seen before, actually be a bad guy? She trusts him implicitly and even allows him to talk tough to her maid. (Eva quickly got a position as a maid) As Betty is a pushover Dracula only needs to worry about Billy now. What can a gun kid do against the king of vampires though?

This film definitely does has its share of fun moments so that does help it surpass the usual Dracula fare. For starters, Billy is a fun character even if he is a little too timid and tends to beat around the bush. Once he had a good feeling that the uncle was evil he should have done more about it. Why give Betty the dangerous mission of constantly antagonizing Dracula if Billy really thinks that he wants to do her harm. Wouldn’t it be safer to go after Dracula himself? Also, Billy’s real confident which is good, but he does not have the skills to back this up.

When he fights with the bully he actually gets completely defeated. I have to admit that I was actually pretty shocked by this. It’s just super rare for the lead to just get owned like that. Then even after the doctor was right about literally everything he decides not to believe her when she says that bullets won’t work on Dracula. This leads to another really embarassing moment for the lead as he goes into Dracula’s lair and gets owned. I like really confident leads of course, but you just can’t afford to be getting wrecked like that.

It does lead to a very interesting scene where we find out that Dracula may be immune to bullets but not to the actual gun. Yeah…this doesn’t make any sense but we can roll with it. Dracula gets completely laid out by the hit to the point where he can’t react when Billy puts a stake through him. Ah well, I’d hold it against Dracula more, but this version of him wasn’t all that imposing anyway. Lets put it this way, multiple characters actively work to sabotage him and he never even murders them. I’m glad for Eva and her husband of course, but why wouldn’t Dracula murder them? They kept laying traps (Okay..not “they” the guy did absolutely nothing in the whole film) for him and telling Betty that he was evil. Taking them out is basically villain 101.

Also, Dracula’s hypnosis is at least one power that he’s still got. You’d think that it would be super effective but Betty is actually able to counter it. At one point when they are in the carriage he makes the face and stares at Betty. It is working for a few seconds until she blinks (Finally, someone realized the trick to stopping him!) and suddenly is back to her senses. You’ll have a hard time finding a weaker Dracula than this one. He has teleportation, but never uses it well and even his super strength feels pretty meager compared to usual. When he gets Billy in the choke hold it takes a while to defeat him. I also wonder what the point of the bat outside was since when Dracula died he turned into a mummy anyway and then the bat died outside. Hmmm.

As I’ve hinted, I didn’t like Betty though. You’d think that she would trust her fiance…who she planned to marry in a few days more than a random uncle that she has never seen before right? The fact that Dracula has any say in her household is beyond crazy. Then he literally puts her under house arrest later on. Betty never actually looks out for herself and comes across as unreasonable. I don’t care how far fetched the story is, you’d think that she would believe Billy. Of course, maybe Billy has gotten beat so many times she doesn’t take him seriously anymore. You’d think hat this infamous outlaw would have looked better here.

It’s rare for both characters to look bad in a crossover but that’s where we’re at. The film’s fun, but it does still have the vampire elements looming over it which hurts. The animal violence scene with the lamb comes to mind as I mentioned earlier and blood sucking scenes also tend to hurt of course. Because of that, it’s unlikely that I’ll see another Dracula film that I actually like, but of course I’ll leave the possibility open. The writing in the film was pretty solid for the most part. The characters may make all of the wrong choices, but that just means they weren’t the smartest characters. Even the sheriff seems pretty iffy as he arrests Billy for self defense. You just know that he wouldn’t have messed with the bully if the roles were flipped.

Overall, This film may have not been a total success, but I really love the concept. This is the kind of film that you just don’t see much anymore which is a shame. Taking two popular icons like this and pushing them together is genius. It’s a fun way to get started with the Billy mythos and I’d be down with watching more of his films. The one gun scene that we did get was pretty fun and the wild west outlaw plot can always work pretty well despite the boring backdrops. If you really like both franchises then this is a film that you’ll want to check out. If you’re also not a big vampire fan then I guess you’ll just want to wait til Billy’s in a different kind of crossover film.