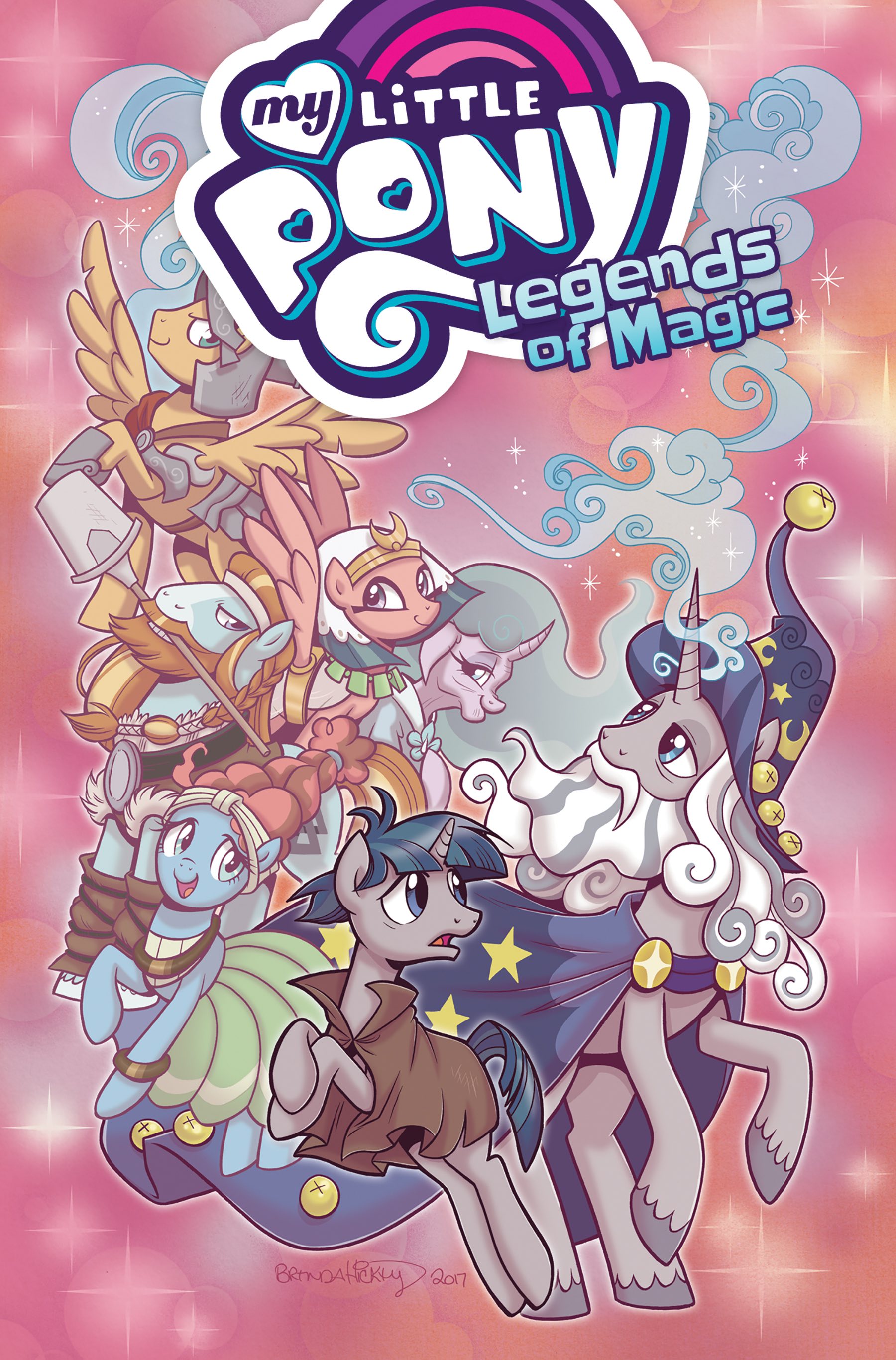 It’s time to venture back into the world of My Little Pony! Legends of Magic is a spinoff series about the old timers and other magic threats. This one is a prequel about Stygian and how he gathered Equestria’s mightiest defenders. It’s a fun volume and while you may miss the Mane 6, these guys aren’t so bad. They may not have as much charisma but they are all pretty strong and it’s like looking at an ancient version of the ponies. It also helps tie in an element from the Equestria Girl film.

The comic starts off with Stygian doing more studying as always. He runs across 3 Serpents who ask him to bring them to the town so they can play for the people. Stygian refuses because these girls are super shady and does some chores for an old pony. When he gets back to town he sees that these Serpents have already made it into the village and cursed everyone with their singing. Stygian barely escapes and decides that in order to stop these guys he will need the strongest Ponies around. Will Stygian be able to find these guys and stop the villains in time to save the day? Only time will tell.

There are 6 issues here and essentially each issue is about recruiting a different Pony and getting one step closer to being able to return to his village. The first member he recruits is Rockhoof. Rockhoof is the power member of the team and he’s so strong that he can create a path to divert the river in no time at all. From there he can take on Bears and do all kinds of things. At first his super power appears to be raw strength but the more you read the comics the more it seems like determination is his special skill. That ultimately makes more sense since he isn’t able to even block a bunch of bunnies from entering the room in a later comic. I’d argue that he is still the most powerful of the group though. He’s a nice guy and it’s good to have someone on the team who is always ready to stand up for Stygian.

Another member of the group is the speedster Flash. He was dealing with some dragons and so at first he didn’t have time to deal with this impending danger. Fortunately the gang was ready to take it out with the dragons and that all ended up going well. Flash is very confident and he’s a good foil to Rockhoof. I dare say that he was necessary in order to make the group a true threat to the villains. Mistmane probably had the most embarrassing adventure since she was kidnapped by her own plants. Ultimately they may have listened to her, but if the others hadn’t shown up when they did I fear that she would have been truly doomed. I just don’t think she would have been able to stand up to the others for very long otherwise.

Meadowbrook had to deal with a lot of violent animals thanks to some poison in the plants. She’s a nice enough pony even if she isn’t a fighter. Her medical expertise could certainly come in handy during a fight. Then we have Somnambula who was dealing with Zombies. She’s the Pinkie Pie of the group due to how cheerful and unpredictable she can be and yet she manages to do so without being completely over the top the way that Pinkie usually is. It is a welcome change to be sure. Somnambula is actually charismatic and while she does enjoy poking fun at the others more than actually helping out, it’s not as if we ever considered her to be a hero.

Finally we have Star Swirl who is as self absorbed as ever. His only goal is to stop the menace threatening Equestria and it’s something that he believes only ponies with power can accomplish. As a result he brushed Stygian to the side the whole time. While he isn’t as exaggeratedly mean as in the TV show, you can see how the seeds are already planted with his character arc. He may be powerful, but the guy isn’t particularly likable. Too bad Starlight wasn’t around yet to show him what true power really is.

These are a fun batch of issues leading up to a satisfying climax. Each issue gave us a nice little threat and then the actual climax delivered with the big confrontation with the Serpents. (I think they were known as the Sirens in the issue, but they look like Serpents) I’d be down for a battle between the Pillars and the Mane 6 at some point. That would definitely be a blast. The writing is solid here and the pacing is good. Each issue feels like it is over in a blast as a result so you are always ready for more adventures. The artwork is quite solid and looks like it came right out of the show. The character designs are on point and the comic excels with the technical aspects.

Overall, Legends of Magic is a very good volume. It gives us more character development on Stygian and it is easy to see how he became the Pony of Shadows. There’s not a lot of gratitude here considering that he saved not just a town, but multiple towns by the end of this mini series. People really didn’t give him much of a chance just because he didn’t have powers. At least this helped the other ponies to learn later on that it’s not the powers that make the Pony but the other way around. I’ve got quite a few more MLP comics on the way so you can expect more reviews in the near future.