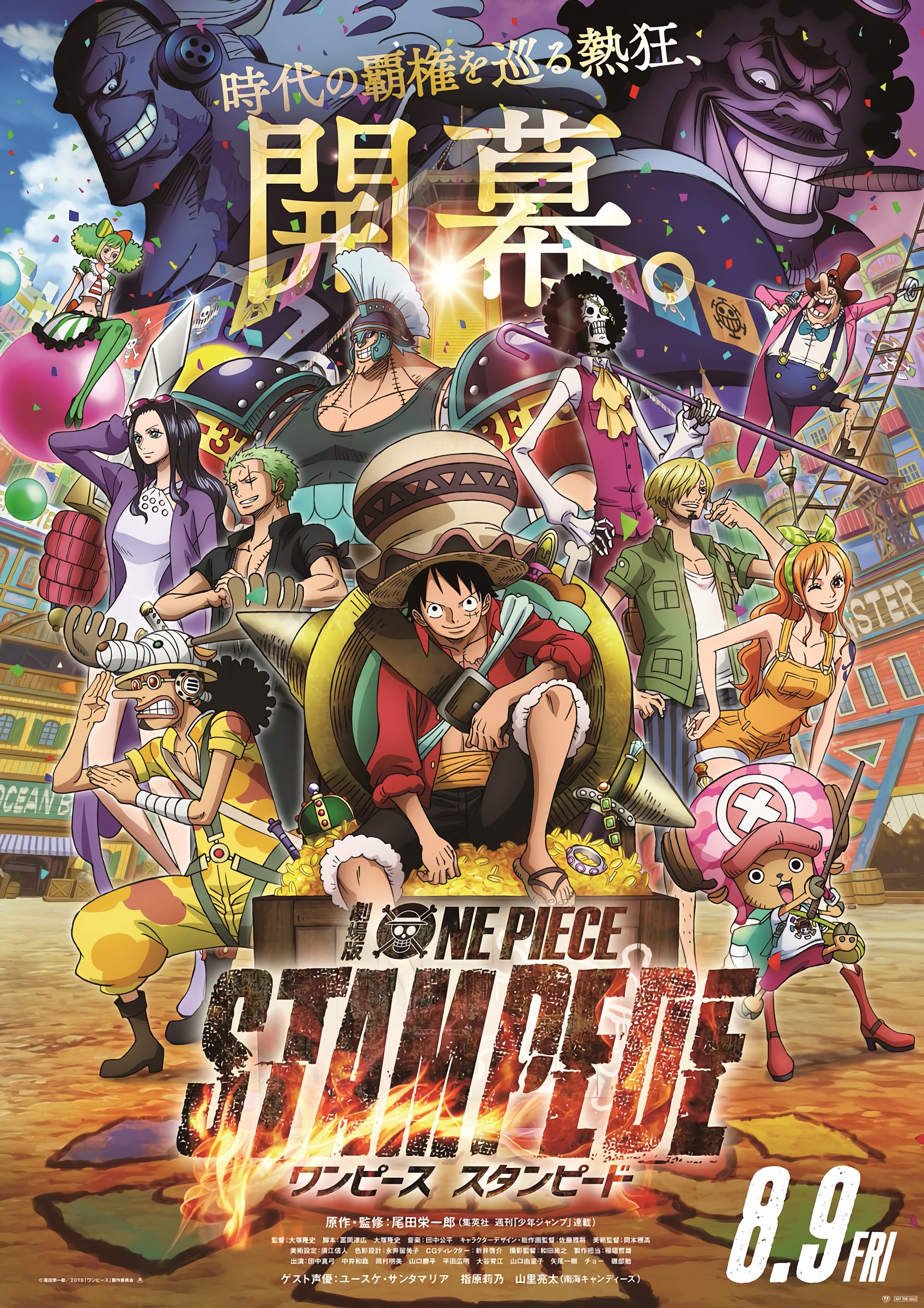 Time to look at the latest One Piece film. This one was definitely getting a lot of hype before it came out because it was bringing together a ton of One Piece characters. Pretty much every big pirate who is currently alive in the series is returning for this film. Naturally since the film is under 2 hours you can’t expect all 60+ of these guys to get a big role, but the movie does a good job of at least allowing them all to get their special attacks in. Then you’ve got the second wave of characters who are big enough to get their own fights. It’s definitely an amazing One Piece experience for fans and anyone who enjoys a good action film is sure to have a blast as well.

The film starts by taking us back to the famous Blackbeard prison breakout from a while back. It turns out that there was one pirate who was far too powerful for Blackbeard to let him join. This guy’s name is Bullet and he once served aboard the Pirate King’s crew. Well, now he is back in a big pirate festival. Festa has organized this thing in order to bring together the Marines, Pirates, and Revolutionaries so they can all be destroyed in one fell swoop. He doesn’t really care who wins so long as everyone gets crushed in the end. Strawhat Luffy and friends have arrived here as well even though they figure it’s probably a trap. That’s because the prize is a treasure from the Pirate King and nobody can resist such a tempting offer. Can Luffy protect his crew and secure the prize before Bullet destroys them all? It’ll be a hard battle for sure.

Right away you have to acknowledge that Bullet is going to be an incredibly powerful villain. He has to be in order to take on pretty much the whole cast of One Piece. The film does not disappoint with his abilities. The guy is pretty much on the level of the 4 empires with how easily he is able to dispatch his opponents. The best fight in the film for me is definitely when he takes on “The worst Generation” (Which is basically a bunch of the hype characters) and defeats them all with ease. They can barely land any decent shots on him which shows just how unbelievable he is. Bullet’s speed and power are off the charts to the point where it’s like seeing All Might bump off the League of Villain lackeys back in season 1. Luffy and the gang are completely outmatched.

Bullet’s also just a fun villain. His goal is to be the strongest and stop the Buster Call. A Buster Call is when the army sends in their admirals and a fleet of ships to sink an island. To date nobody has ever really been able to stop a buster call on their own. Sure, a bunch of characters escaped in Marineford but that wasn’t technically a buster call and they did manage to stop the main threats the government wanted to end. For Bullet to defeat such a thing would be very impressive. He also likes a good fight and seems to have a reasonable honor code. He’s defeating his opponents at the top of their game and doesn’t use any cheap tricks.

Festa is the only other important new character and he’s a fun enough villain. The guy definitely holds onto his grudges and really wants to wreck havoc on the world. It’s for a surprisingly petty reason though. The guy has a great seat but you do have to wonder how nobody noticed him the whole time. I guess he’s so weak that the heroes don’t need to bother prioritizing him. They’d probably just finish him off afterwards which works well enough.

The animation is definitely top notch. It’s all very smooth and vibrant which is great. The fight I mentioned from earlier is very impressive and like something out of DBZ. There are also a bunch of other fights throughout that have great cuts as well like Zoro vs Fujitora and pretty much any scene with Sabo. It’s all very consistent for the duration of the film. We also get some CGI which looks good enough. I think CG is at the point where it should always look good so long as you splash it in a lot of colors. That’s where CGI is at its best. It may not be enough to make giant things exciting, but it tries its best. As for the soundtrack you’ll recognize some tunes from the show. The main new theme was Bullet’s theme and it’s the best piece of music in the whole film. Whenever it appears you know that things are going to get tricky for the heroes. It’s just great all around.

This film also completely avoids the occasional fanservice issue that the series has at times and even Brook doesn’t have time to do anything iffy. The film managed to avoid having any real issues and that’s the first step to being a great film. The next step is to actually have great moments and this move has them in spades. There are a ton of homages and nice little scenes for fans. All of the characters get quick moments where they look good and they all get a ton of hype. That being said, keeping up everyone’s hype does come at a bit of a price.

Pretty much every fight in the film is a tie. That’s something that tends to happen when you bring in a bunch of old characters who still have a lot of fans and Stampede wasn’t able to get around it. Unlike some titles like DBZ where there are big power gaps between everyone, a lot of characters in One Piece are still very close. There are characters from the opening arcs who can hold their own against the current villains. That’s because the characters get stronger very gradually and the old characters keep training as well. The matches are still hype, but this does dampen the excitement for them a little since you know that the battles can’t end. This happens over and over as everyone gets a skirmish and then backs down. Unless you’re fighting Bullet then your battle won’t end.

This film is trying to be Marineford 2.0 with how every character is around and that arc also had the same issue at times. Naturally nobody can die this time around, but all things considered the film did do a good job of keeping that same energy throughout. Once the action starts near the beginning of the film is really never dies down. That’s always important for a big movie like this one since it helps for replay value. Stampede definitely has a lot of that at its disposal.

Then the only other part of the film that could have been improved was Bullet’s final form. When he started to transform I admit that it was a little disappointing. That’s because he went from being an awesome DBZ villain to suddenly being a skyscraper who can barely move. Naturally this is where the CGI starts to come into play. No matter how neat a design the giant form might be, it’s just not going to be able to make for really fun fights the way that his first round was. When one fighter can’t fight back then it’s no longer a real fight. Since Bullet’s giant form can’t do much it just barely counts as an actual match. Bullet does manage to bring back his human form near the end of the film for a quick fight as well though so we did get a true climax.

Luffy is definitely at his best here. He may not look too good against Bullet for a while, but not being strong enough to win isn’t a bad thing in itself. The important thing is that he was trying to win right from the start and was quick to try and help Usopp. Helping his crew out has always been Luffy’s main objective and it’s good to see that hold true here. The rest of the gang aside from Brook look good as well. Zoro and Sanji definitely contribute the most, but Franky and Nami are also very useful. Then for the other pirates it was nice to see Sabo since it’s always rare to see his adult form. It’s a little surprising how calmly Luffy and Sabo exchanged a casual greeting here and then just didn’t talk again. I guess it wasn’t really the time or place to really have a long dialogue but a team up would have been good.

Stampede did a good job of choosing the all star team at the end. Hancock is one of Luffy’s most dependable allies at this point while Law is practically a strawhat now. Smoker may not always be able to compete against some of these guys but his ability is really neat and he has been improving quite a lot. The fact that he can still give these guys a fun for their money is pretty good. Mihawk also shows up to flex real quick and the heroes are lucky that he didn’t stick around since the guy still appears to be way out of their league. He’s definitely Emperor level or at least that’s the way he appears to me.

Overall, Stampede is definitely a great film. I like this new trend of the fight starting early on and then continuing for basically the entire film. Dragon Ball Broly did that to great success and now the same is true for Stampede. I definitely preferred it to Gold and Strong World. I haven’t seen the rest so I can’t comment on that, but that would put this as the best One Piece film right now. There are really no serious complaints I had with it and the movie definitely has a ton of replay value. Naturally as a fan you will get extra enjoyment out of it since it’s a reunion type film, but I dare say that casuals who haven’t seen the series before will enjoy it as well. There’s something here for everyone.