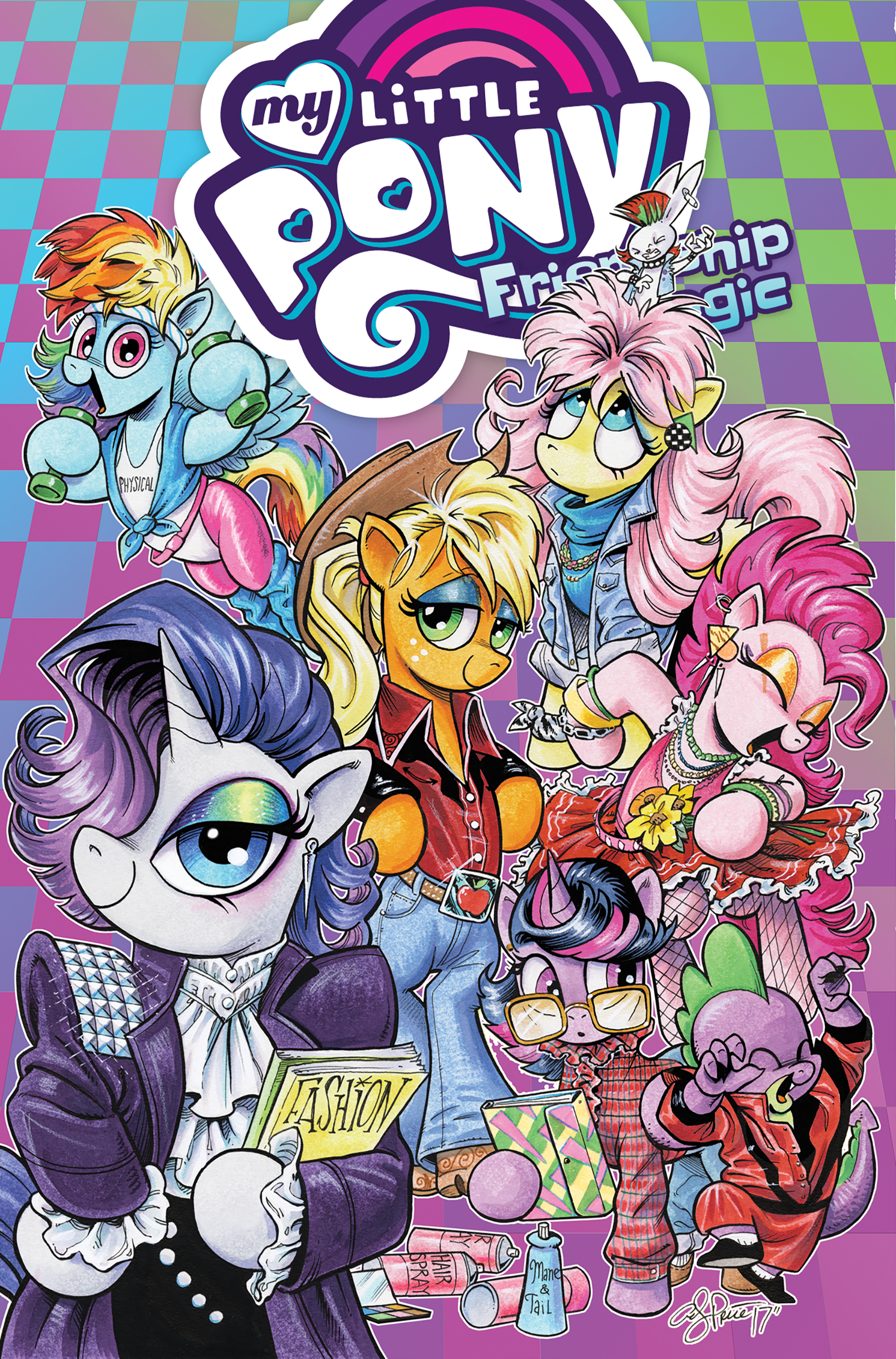 It’s time to take a look at the next My Little Pony volume. We’ve got quite a few hype stories here ranging from Mane 6 adventures to the supporting characters stepping up to the plate. As expected this is a very solid volume that keeps up the momentum from the last one. It’s also cool that the series has enough issues for 15 whole trades. That’s really not an easy feat for any series. It shows that MLP is doing quite good.

First up we see Rarity and Fluttershy head over to Manehattan. Fluttershy is here to learn more about how to operate an animal shelter while Rarity wanted to get some inspiration for her fashion trends. Unfortunately Rarity is saddened to learn that the fashion has gone back in time to when she first went there and developed a line. She doesn’t want to re-do what she used to make, but at the same time Rarity doesn’t like creating her own trend. Meanwhile Fluttershy’s workshop doesn’t go well since the ponies keep guilt tripping them all on what they should have done originally. Now Fluttershy isn’t sure if she should have created a shelter in the first place.

It’s a fun story and one that is packed with plotlines since we have two in one issue. I think Rarity’s predicament was a little easier. Sure, it’s not really as fun to develop the same things you’ve already done, but she does learn where she could have improved the first time around. For Fluttershy the whole situation is pretty stressful since she finds out that her shelter has basically been operating outside the law. Still, it’s not like she can fix the past so she does her best to move forward. A solid way to start the collection.

Next up is the best issue in my opinion. Princess Celestia apparently goes down into town once a year in disguise. She uses a powerful amulet to seal away all of her powers to make the disguise more complete. I personally think she could have done the illusion without losing her powers, but I suppose whatever will trick the ponies more completely right? Unfortunately someone steals her amulet so now she needs the help of the Mane 6 to get it back. It’s a fun tale because we rarely get to see Celestia hang out with the main characters as just another pony. It did take a lot of convincing to get the Mane 6 to accept her though. I suppose Celestia will always be a little intimidating. Meanwhile the pony who stole the amulet works for an old lady who seems pretty corrupt. It was interesting to have a villain group like this standing in the heroes’ way. The villain also did get super powers even if it didn’t lead up to a big fight. This story had the highest stakes.

Then we had a story where we find out that Ponyville is doing a movie based on the Mane 6’s adventures. Rarity and friends are offered jobs as directors to make sure that the whole thing is historically accurate. The problem is that everyone has different memories of how things went down and they can’t agree on a single vision. This ultimately leads each of the ponies to try and do their own thing rather than teaming up. We get 6 different scenes that are spliced into a movie which goes about as well as you would expect. So whose memories were right or are all of them a little off? The characters are all a little unreasonable here as you’d expect. I guess the offer of being a director was just a little too tempting for them to resist. The group definitely don’t tend to get along when they have to team up like this. It’s a good reminder that your memories aren’t always 100% accurate and likely differ from the person next to you.

Finally we have the big story that takes up two issues. It takes place after the movie and Tempest is still having a hard time adjusting to normal pony life. They all just seem so happy and over the top cheerful for Tempest to really feel at ease. She decides to leave the kingdom for a while and Cadence suggests that she go and help out a nearby village. Tempest meets up with one of the ponies she used to be friends with before she turned evil but still harbors a grudge over the past. She will have to put that to the side for now though since the cosmic bear who broke her horn as a filly has returned. Tempest will need all of her skills to win this round.

This was the weakest story for me. The length wasn’t an issue, but I do think that Tempest got nerfed a little too hard here. There’s no reason why she shouldn’t have been able to defeat the bear with ease. The comic has her freeze with terror and it was a traumatic experience back when she was a kid, but I feel like she would have taken this situation in stride a lot better than she did here. I also don’t blame her for being upset at the other ponies because in the film we saw how they abandoned her. It turns out that they went on a really fun vacation and sort of forgot about Tempest. Mix that in with Tempest being overly defensive and they just broke apart. Tempest definitely got a pretty raw deal all things considered, but things are looking up for her. Her character development arc is similar to Starlight’s, but she just hasn’t gotten quite as much screen time yet. Hopefully she gets to appear more in the future.

The artwork here is definitely solid. The ponies are very expressive like the later seasons of the show. The colors are vibrant and it’s very easy to read through these issues. It’s a fun volume through and through. It also felt a little longer than the last trade since we got 5 issues here instead of 4. It helps add more value to your purchase. The writing here is solid and consistent so I have no qualms there. While the Mane 6 may still fight quite a lot considering how many friendship lessons they should have learned by now it does remind you that you can always learn something new.

Overall, Volume 15 is pretty solid. Without the Cutie Mark Crusaders I wouldn’t put it quite as high up as volume 14, but it’s definitely close. As I mentioned my favorite story is the Celestia one. It’s always a cool concept to have the leader walking around town in disguise. It also makes sense to do this since the leader won’t hear everyone’s true thoughts. It’s always a sad reality for the boss that there are layers put onto everything they hear. You’ll never get past the filters no matter how nice you may appear to be so becoming just “one of the ponies” is the best way around this. I’ll be checking out volume 16 pretty soon so stay tuned!