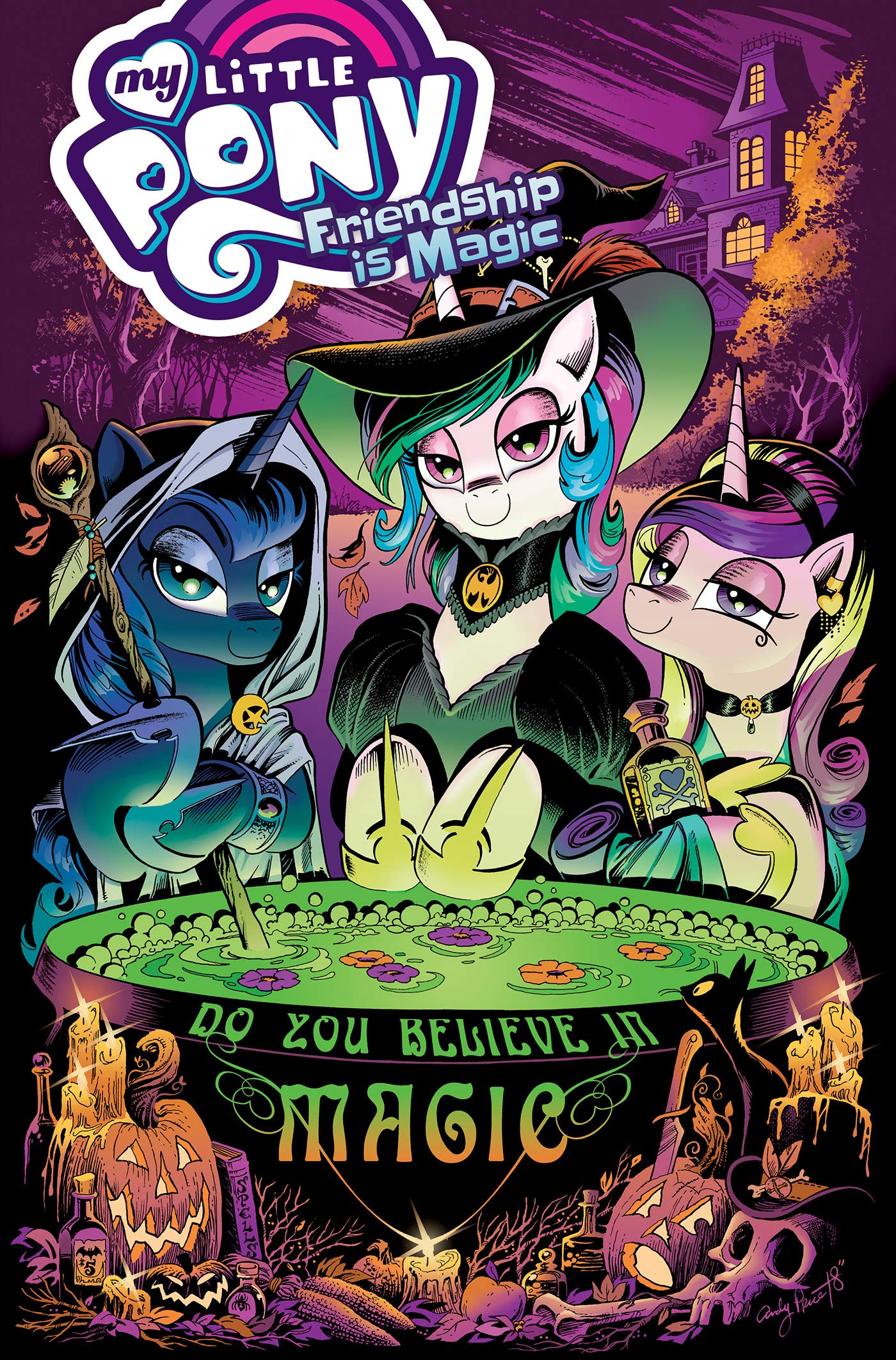 The My Little Pony roll continues as I enter Volume 16. We’ve got another good batch of comics here with one of them being a Halloween special! I suppose I probably should have read this one about a week or two ago, but better late than never right? There are 5 stories here all with their own unique adventures. They’re all solid stories in their own right with no weak ones so the series continues to have a good amount of consistency.

One story has the elder apples playing Bingo with Applejack. The young pony decided to invite Rainbow Dash this time though and that ultimately leads to her downfall. Rainbow quickly points out that the game is a little boring and Applejack had apparently been leading this game for 5 years so everyone else was tired of it as well. Rainbow decides to spice things up by introducing them to Extreme Bingo. What happens in this game is that Rainbow hides the pieces around Ponyville and now the elders will have to split up and find them. First one to get a line wins. Applejack is against this because she feels it will be dangerous, but Granny Smith won’t hear any of that.

Applejack admittedly has a point here. Rainbow put some of the pieces in really dangerous places like an abandoned haunted house or past a bridge that was breaking down. Most of the other pieces are safe, but even just 1-2 like that do make things difficult. Had Rainbow not done that then I would have been on her side since Applejack always is overprotective. It was Rainbow’s loss this time, but it’s still a fun issue nevertheless. It was also nice seeing the elders call in their favors with the Mane 6 to get them into the competition. Honestly this could have been a two part comic with every member getting a buddy and things getting super competitive.

Another issue has the Student 6 getting invited to a haunted house by Twilight Sparkle. She was in disguise, but unfortunately they saw right through it. What Twilight didn’t count on was the fact that the rest of her friends put in a lot of contraptions of their own so when mixed together there is some real danger here. The kid are scared, but the Yak reminds them that if you use fear it can turn into power. It’s a good issue although it was a little extra irresponsible of Twilight to not check over the house herself. Also, she could have teleported in at any time so I don’t see how she took so long to get there. Parts of the plot were hard to buy so this is the weakest issue, but it’s still good. The moral that everyone feels fear is pretty good. People may not always show it, but just having that knowledge will let you cope with it a lot better than you otherwise would.

Next up Pinkie Pie gets the ability to make her wishes come true by eating a golden apple. This is Pinkie Pie so as you can expect she immediately begins to make a ton of wishes which puts everyone else in danger. She nearly drowns some ponies in hot fudge and she summons a bunch of balloons which get in Rainbow’s way. Even when her friends tell her to stop Pinkie is reluctant because she knows that her wishes will ultimately make everyone happy. There’s no two ways about this one, Pinkie’s the villain. She may be trying to justify this, but once her friends are flat out telling her to stop and she refuses this gets a little tricky.

Most of her wishes are also not that helpful. I think she would have convinced me of her side more if she wishes for better houses in the village or something like that. Wishing for Fluttershy to be transparent for the rest of her life? That probably stings for such a pleasant character as Fluttershy. Eventually Pinkie sees the light and we’re reminded that power corrupts. I do have to question why Applejack has had a golden apple like that and never used it before. That certainly would have come in handy during several of the villain invasions in the past right?

One story has Fluttershy acting rather oddly. She seems rather emotionless and even a bit rude to the rest of the Mane 6. She even kicks Rainbow Dash away which was pretty violent for such a peaceful pony. Well, it turns out that Fluttershy is acting like the animals around her thanks to an ancient amulet and now she has the personality of a dangerous wolf. The heroes will have to find a way to remove the effects of the amulet quickly or the damage Fluttershy does will eventually become irreparable. This is a good story and it reminds you not to mess with dangerous amulets. Spike also had a pretty good plan here. It’s rare that he thinks of something before Twilight so that was definitely fun for his fans. He stepped up when they needed him to do so and that’s always good.

Finally we head back to the Apples as Granny Smith thinks about an apple pie that Applejack’s mom used to make. It was the best ever, but nobody’s been able to recreate it. Applejack decides that this won’t do and gathers the local cake experts to crack the code. Pinkie Pie and Miss Cake are brought in, but even their efforts are in vain. The problem is the mysterious ingredient of “Love” in the recipe that they can’t seem to crack. After all they all really want to make Smith a good pie so shouldn’t that be enough? To find out what the ingredient is they will have to travel across Ponyville finding all of the ingredients that the Mom used to make while piecing together the past.

This is a pretty nice comic because it’s doing so much at once. We learn a lot more about Applejack’s parents through the stories that the villagers tell. Then we also get to see ponies team up in a rare combo because Miss Cake is rarely such a major player. I’m also always up for a good food story and since pie plays a big part here it’s nice to look at. In the end this is just a very wholesome comic. There may not be high stakes, but being able to recreate a recipe is always fun. It’s also something you can relate to because it’s always hard to make something quite the same way as someone else. I always like making recipes for myself so I don’t need to worry about that, but for people baking for a group it’s always a source of pressure.

As always the artwork is on point here. The pie comic is the only one where everyone was maybe drawn a little too young, but beyond that the proportions were all on point. The colors are vibrant and it always makes for a very pleasant read. The writing is definitely solid as well with everyone being polite while not being afraid to throw a little sass into the mix. You have to read between the lines at times to see how the ponies really feel. Except for Applejack, she’s always quite direct.

Overall, Volume 16 continues My Little Pony’s strong run. Alas, this is the final volume of the main series I have on hand so it could be a while before 17 hits. I do have one more MLP comic to read but it’s a little different from these. If you haven’t read this comic yet then I’d recommend picking it up. MLP is one of those comics that anyone can enjoy. These stories are just plain fun and whether you’re a kid or an adult you can pick up on the messages and have a good time with the characters. Now I’m ready for some Apple Pie, but I must stay strong until Thanksgiving!