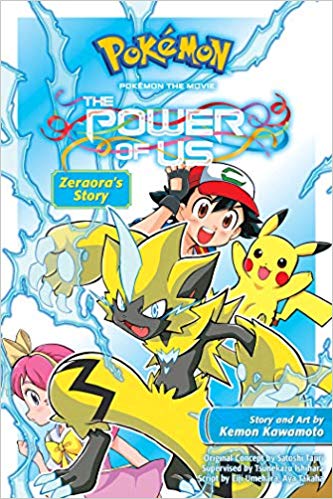 Time to look at another Pokemon one shot manga. This one’s a lot more recent than the Giratina one I checked out last time. It’s also a lot thinner as this is basically a mini manga so it goes by in a flash. That being said, it’s actually considerably better and one of the best one shot Pokemon manga that I’ve read. Surprisingly it beats Giratina in every aspect. I also have to give this volume some kudos in the art. The simple style actually ended up working really well for the fights.

The volume starts off with Ash running into town and bumping into the mayor’s daughter. The two of them head over to the nearby lab and put on some VR goggles so they can learn about Zeraora’s origin. It seems like the Pokemon was born out of a thunder storm and then he decided to protect all the nearby Pokemon. Unfortunately poachers show up so Zeraora has to stay sharp and keep on fighting. It feels like people are always trying to fight this guy. You can see how the volume is pretty short though because the whole volume is basically the professor showing them the story and then they go home. Interestingly the manga ends with a preview which basically recaps the first few pages almost word for word but with a few changes.

Back to the volume though, Zeraora is a fun Pokemon. He clearly loves to fight as seen by his smirk after being attacked. I’m also glad to see him actually take a hit and keep on going. It’s always sad when a Legendary Pokemon gets wrecked by random poachers or gets caught in a cage. None of that was happening to Zeraora. He took down all challengers and I dare say that he had the upper hand against Lugia as well. That fight was the highlight of the volume, but admittedly it was Zeraora’s fault. Lugia just came in to get rid of the fire. Zeraora blamed him for not coming sooner, but that’s hardly Lugia’s fault. The Pokemon can’t be everywhere and at least he saved some people.

It would have not been good if Elekid had perished, but fortunately the manga didn’t go down that route. That would have gotten a bit dicey if you ask me. With Elekid safe then we could really enjoy the fight. This is where I have to go back and talk about the art. The fights are very smooth here. It actually seems like a similar style to Bleach where you feel the impact beyond every hit. The characters may look a bit chibi at times, but it’s worth it for the action scenes. It’s really going for the opposite of Pokemon Adventures. That series has a ton of detail and epic fights. It works really well, but the same can be said for the flip side where this one is really focusing on the hits. This doesn’t feel like a cash-in level of art, but that of a real title.

If there are any negatives here it’s just in how short the volume is. Hopefully the going price would be a little lower to compensate. So long as that is the case then there are really no negatives to be found here. The manga has a direct plot and goes about it with no delays or distractions. You don’t need to stretch out the volume just to pad out the pages. This one just gets right down to business and it’s also probably Lugia’s best showing. It may be a little sad that we don’t get to see Ash fight, but he got his match in the actual movie. This is really Zeraora’s time to impress us and he was quite impressive. I’d take him over quite a few Legendaries. He may not be as intimidating as some of them, but his speed and power are still forces to be reckoned with.

Overall, If this had been the plot of the actual movie then things would have been quite different. This would make for an excellent TV special so I hope it is animated in some way or form. If you watched the movie then this is a must read to really see more of Zeraora’s character. He may be a little too quick to jump into a fight and doesn’t have the cool head that you’d want your ally to have, but his heart’s in the right place. At least he’s actively protecting Pokemon from poachers since the Officer Jenny’s of the world don’t seem to be around when you need them. It’s still really something to see how many poachers exist in the Pokemon world. Throw in Team Rocket and all the other teams and the world is actually quite dangerous. Hopefully Ash and friends are ready for them, but with Pikachu at his side I suppose I don’t even need to wonder. I hope that whoever the artist of this was gets another chance at more Pokemon manga in the future.