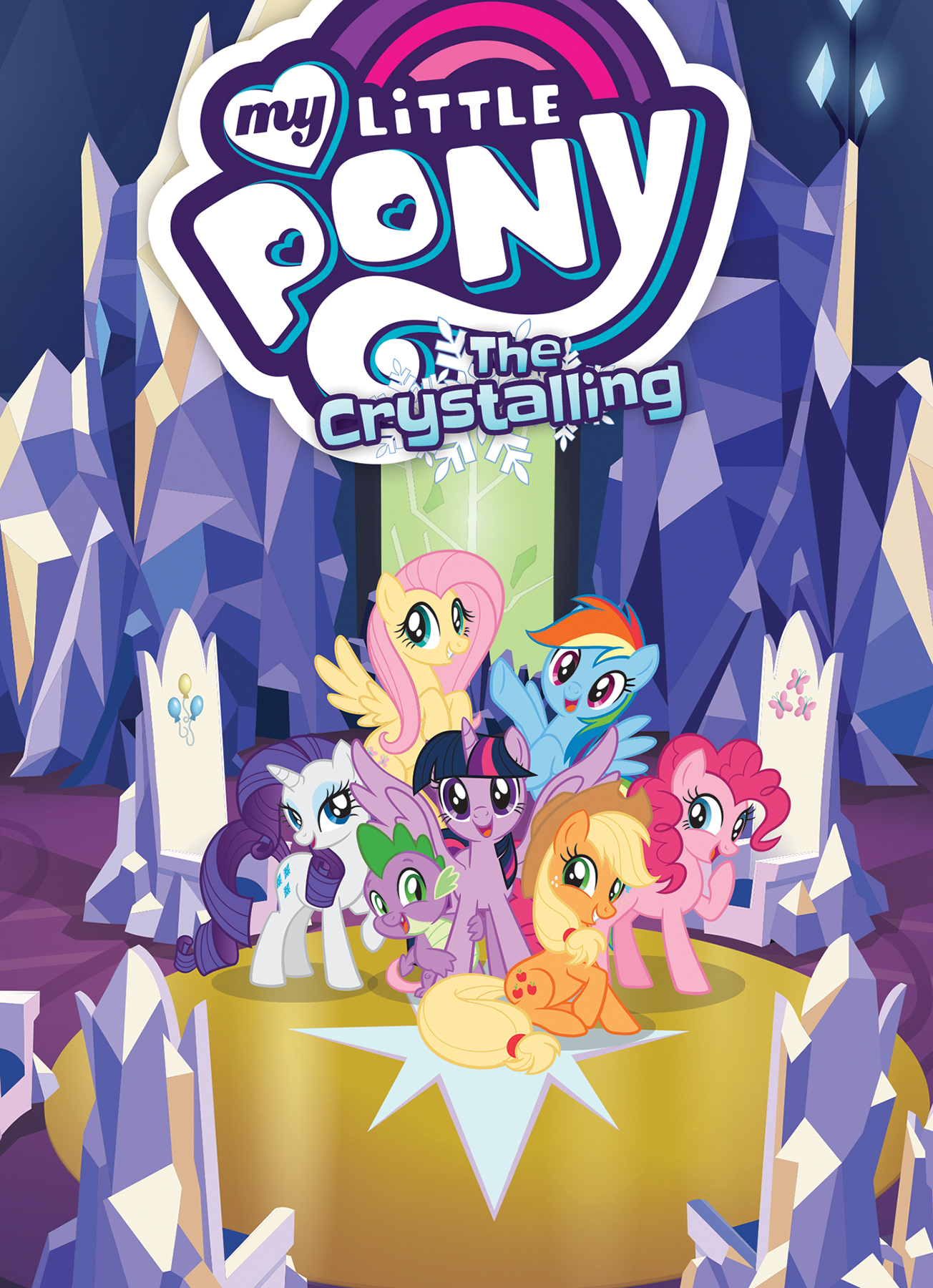 It’s time to take a look at a comic adaption of the Crystalling two parter from the TV show. This is one of those comics that is basically a screenshot version of the show. It was always an interesting concept even if I don’t totally see the point of it. I suppose it’s a good way for fans who are unable to actually watch it live to still experience what the episodes are like. As a result it’s almost like I’m reviewing the two episodes. It’s a solid comic and if you did have to read this instead of watching the episodes you won’t be missing much. The key scenes are all here.

So Twilight is getting ready to head to Cadence’s palace for the Crystalling of the new baby. It’s effectively a ceremony using the heart of the kingdom. She also needs to give her student Starlight Glimmer a first lesson and figures that she can knock out two things at once. She instructs Starlight to seek out Sunburst as they used to be best friends before Starlight turned evil. Starlight isn’t thrilled with this mission, but she doesn’t want to let Twilight down. As such, she gears up for the meeting. Will she really be able to re-connect with Sunburst and will the Crystalling go as expected?

There are really two plots here which eventually merge into one. For the Starlight plot, you can definitely see how this is a hard mission. It’s hard to reconnect with someone you haven’t seen in many years. Twilight making this into a friendship lesson also puts a ton of pressure on Starlight. I think Twilight’s heart was in the right place, but I don’t think this was a great thing to turn into a lesson. Starlight did a really good job of adapting either way though. She went and met up with Sunburst even though it was hard on her and from there she went and helped save the kingdom.

It’s easy to see why Starlight would go on to basically become the leader of the group. She’s definitely the strongest pony around and she took to the friendship skills pretty quick. I was definitely a big fan right away. Meanwhile I was less impressed with Sunburst. I dunno, I never really liked the guy much. On his side he had far less reason to be cryptic about his past which inevitably leads to him blowing a fuse and not even trying to help save the world. It was a lot of pressure but it still would have been nice to see him stick up for the others and try to help even if it meant pretending to be a magician for a little longer.

The other plot had Cadence and Shining Armor being out of their depth once more as Flurry Heart took center stage. It’s always nice to be born with incredible powers and that’s exactly what happened for Flurry. This time Pinkie Pie did a good job of distracting her while the others went to work. Twilight may not have been able to solve this by herself this time, but she was definitely necessary in saving the world. Without her the heroes wouldn’t have even had a book to start solving with in the first place. We also got to see Celestia and Luna fight off the clouds a bit. Not the most exciting action scene, but it’s still an action scene nonetheless.

The writing is sound here and the cast of characters are good. There’s not a whole lot more to say because the comic is so short. You’ll be done reading it in the blink of an eye and then you’ll be ready for the next saga. In retrospect it is a little surprising that no villains were present in this story, but I suppose you can always get a little tension in with natural disasters rather than relying on a villain to get things moving every time. At the very least it makes sense why you would want to mix things up every once in a while. I would have been game for a quick Twilight vs Starlight battle due to a misunderstanding or something though.

Overall, The Crystalling is a fun two part event. There aren’t any villains here, but it’s just a fun story where we get to see the whole gang of MLP fighters. All of the ponies contribute to the plot and make for a fun team up issue. The Mane 6 certainly have less of a role next to Twilight and Starlight, but they still get their contributions. The format of the comic makes it easy to take on the go and read. It’s also a decent enough size where it’ll last you a good batch to read through. I don’t expect I’ll be getting more of the episode adaptions (I got this one by mistake) but they are good. They’re as good as the episode versions and most of those get a 7 as well. It is always nicer to read a brand new story, but nostalgia goes a long way. It’s been ages since I saw this episode.