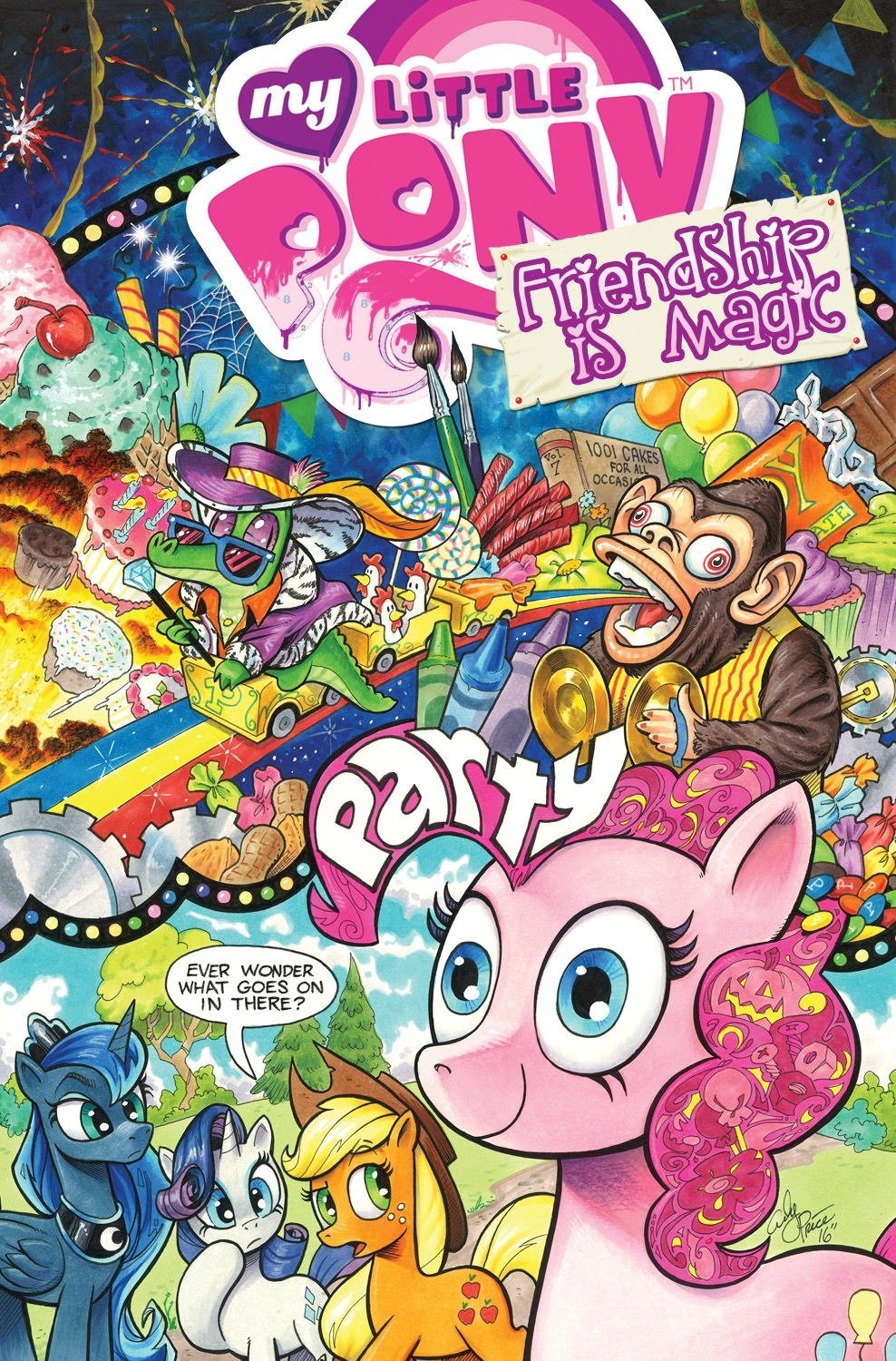 It’s time to look at the next MLP comic. This time it’s the big volume 10 so I’m glad I was able to go back and check this one. It lowers the hole of missing MLP comics I haven’t gotten to check out. It’s a pretty solid array of issues. 2 of them get a little experimental, one of them successfully while the other one ended up not rising to the occasion. The main issue is about the Cutie Mark Crusaders though and you can’t go wrong there!

The first issue has the Cutie Mark Crusaders going on a mountain climbing adventure. Diamond Tiara and her friend go as well, but the heroes are ready to have a good time anyway. Unfortunately their excitement goes a little too far as they ditch the group and go on their own. Eventually this causes them to get lost and they must now find a way to get back to the other ponies. That’s one plan at least, the other is to stay put until the Mane 6 arrive to save the day. It’s hard for the heroes to agree on one strategy and making this even harder is the fact that Diamond Tiara keeps on insulting the crew. She’s not exactly a team player and insists on reminding the other ponies of this time and time again.

This is a pretty good story. It was also really long so I think it may have been 2 issues rolled into one or an annual of sorts. We got to have a lot of development with the CMC doing their best to try and get Tiara on board. You really can’t blame them for anything that happens because the effort was made. Apple Bloom may not have been too eager to slow down for Tiara but if a member of the party doesn’t want to travel with everyone else it’s probably more dangerous to just stay there uncertain of where to go. At least Apple Bloom was trying to lead the group to the next objective and ideally she would have gotten them somewhere safe. It’s inevitable that the Mane 6 would show up at some point so the important thing is to get high up where it will be easier to find them. Apple Bloom had the right idea and this was a great way to kick things off.

The next story was a pretty emotional one about how Twilight and Spike first met each other. This takes place back when Twilight didn’t really have any friends so even looking after a dragon was pretty tough for her. She was already having a hard time keeping up in class so this big responsibility threatened to break her. She did a pretty good job of looking after him either way though. Her methods may have been more automatic than others would have been since Twilight has a hard time showing her emotions, but she was never mean. The series showed some good restraint in making her a reasonable pony and not throwing her character out the window.

Spike was definitely a handful, but he is a baby here so we can cut him a little slack. I can also sympathize with Twilight preferring to spend time with her family during the school meeting than the other classmates. Since she never talked to them during the year that would have been a little odd. So this was a good follow up story to the first one. It may not have had the same level of thrills and teamwork, but I’m always up for a good “first meeting” story.

Next up is the weakest comic of the volume and possibly the weakest one in the whole series. At the very least it would give them all some competition. It starts off with Zecora talking about how 1 bad attitude can spread to countless ponies if not treated right away. We see that Rainbow Dash had a bad day and she begins taking it out on all of the other ponies. Soon all of Ponyville is in a bad mood as none of them can break the cycle and it looks like Rainbow Dash will have to be the one to save the day. I found both the premise to be weak and the artwork, but make no mistake it’s the latter which hurt the issue for me the most.

Experimental artwork usually doesn’t do the trick for me. It can look interesting, but I just really like my polished artwork that you get in most of the comics. Even for anime or movies I typically prefer something traditional to something that’s trying for a very off approach. You can certainly make something unique that’s really cool without being totally crazy. This issue is mainly with watercolors and so everything is hard to make out and a bit scattered. It’s not all that appealing to read and you’ll be tempted to just skip over to the next issue. Art is critically important for a comic. Also the plot is a little hard to buy. Everyone in Ponyville gets upset because Rainbow made one mistake? At least one of the ponies should have been able to break the cycle if you ask me. That being said, Ponyville has never been the nicest town out there. They turn on each other very quickly.

Finally we have a comic where Pinkie Pie and Rarity make a comic. It’s pretty meta in a sense. This one’s also experimental, but it works a lot better. It would probably get old if it went on for more than 1 issue, but as a one shot it’s interesting enough. The dilemma that the two of these ponies face is that their taste in comics are very different. Rarity wants her character to look very regal and nice even though she is supposed to be the villain. Pinkie Pie gets distracted a lot and so her stories become very unfocused. Both of them keep on trying various ideas throughout the issue which vary in terms of art and plot. The arts are all very different and we even get a live action sock puppet style. By the end of the issue they realize that just making a comic is a lot of fun even if they may never agree in the end.

It’s a pretty good message. When creating something with someone else you are going to have to be ready to make a lot of compromises because the odds of you two having the same ideas are slim. Each of you will want to do something different with the characters and that will lead to a lot of disagreements. Just remember why you are teaming up on a comic and hopefully that will inspire you to work these things out.

Overall, This was a fun MLP volume. As always the stories were a lot of fun and also taught good messages along the way. The pacing was good and the artwork for the various volumes was solid as well aside from that one issue. It’s been a consistently good run for this series so I look forward to more of the same in the next volume I check out. Volume 17 is the next one so we’ll be jumping back into the era of Princess Twilight and the Student 6. Hopefully that means Starlight Glimmer will get to appear and another issue about the CMC would be nice. If you haven’t checked this comic out yet then you should. It’s a well balanced adventure.