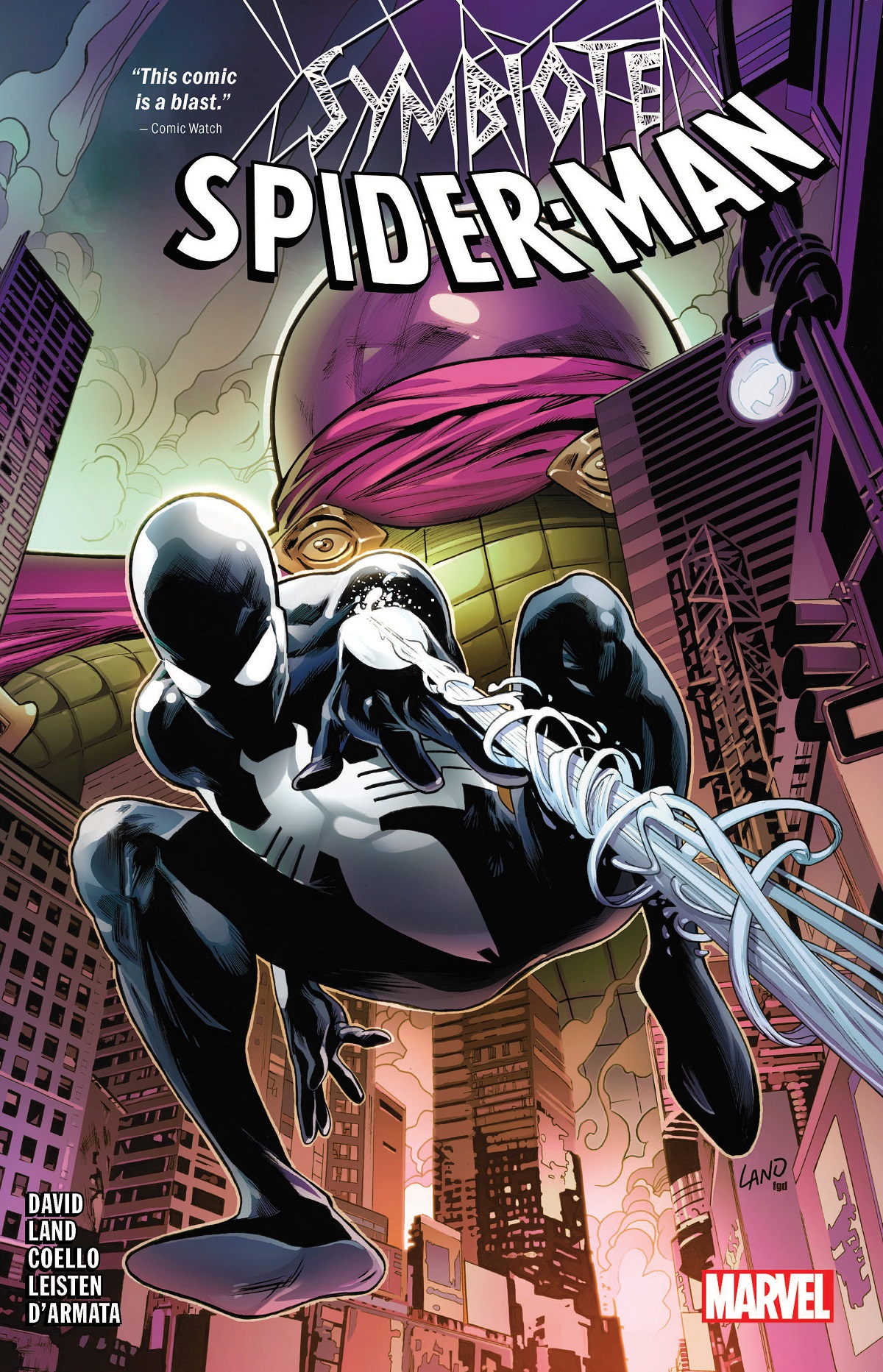 It’s time to look at a Spider Man trade. This one has him in the symbiote suit even though he denies it the whole time and claims that it’s just a robotic replacement. I think it’s fair to say that it’s the real deal based on everything it does in this volume, but I suppose I can’t say that with 100% confidence. It’s a fun adventure that should feel nostalgic to long time fans of this neighborhood hero.

Mysterio is sick and tired of being treated like a D rank villain. He’s B rank at the absolute worst. Unfortunately even his friends make fun of him so he decides that he’ll have to stop Spider-Man if he really wants to be taken seriously again. He has a friend who works for Kingpin and together they decide that taking Spidey’s new suit away is the first step. To do that Mysterio blackmails Black Cat into helping out. Will she really help him claim part of Spidey’s suit or will she realize that betrayal is never the right option and make the heroic choice?

This isn’t Peter’s best appearance, but before I lay into him I should give you guys some context. It’s been a really rough time period for him in general. Aunt May is no longer on speaking terms with Peter due to a lot of events that have happened recently which has taken a toll on him. He’s currently together with Black Cat but she only liked him when he’s wearing the costume which isn’t all that helpful. Right now the only thing that is really going well is his life as Spider-Man. Even so he does let his guard down quite a bit and doesn’t trust his Spider Sense the way he should.

There are two big times it would have helped him here. One of those times is with Mysterio. The guy wasn’t actually there at one point so the spider sense didn’t act up, but Peter ignored it anyway and jumped in which ultimately just led to a losing battle. The other instance which was a bigger issue is when Black Cat decides to trick him. This time his spider sense does flare up, but Peter doesn’t question it as he just wants to have a good time. Naturally this leads to Cat getting the last laugh. Peter may just think it was worth it, but without the suit looking after him things could have gone pretty badly. Peter does have an idea of what happened afterwards, but it was a little late for that. If Black Cat actually meant to hurt him that would have been it for the hero.

So he doesn’t look great when he’s around Black Cat. That’s really the bottom line here. Even after she talks to Aunt May she appears to be more reasonable than Peter in that discussion. He doesn’t even want to stay back to talk with her and just dashes off instead. While these scenes do hurt him, at least it is nice to see Peter as more of an adult. It’s an era of him you don’t see all that often anymore as in the Dan Slott comics he always acts like a teen anyway. At least in this trade this is peak Peter who’s got a lot of experience and knows how to fight with any of his enemies. It’s always good to see him getting that level of respect.

Meanwhile Mysterio looks good. He actually has some good plans and did know enough to blackmail Black Cat. The comic takes him seriously and the guy does a good job of getting some clout back. It’s not like he’s going to immediately rocket up the ranks as one of Spider-Man’s deadliest enemies but it’s still a nice appearance. I liked him in the recent film too so maybe things are looking up for the villain. His suit does allow for a lot of fun fights with all the holograms running around. Then we have Black Cat who doesn’t look quite as good. I think she did allow herself to get manipulated a little too easily. Honestly I think if she got to Spider-Man right away and explained her origins he would take it well. If he didn’t then she would be better off without him anyway.

Bad luck is a terrible power as it is so she doesn’t need to worry about someone else not liking it. Plus Peter already knows about the ability, he just doesn’t know the origins. It’s not as if the whole thing would be great news, but most of it wasn’t her fault. The parts that were aren’t downright terrible. By allowing herself to be blackmailed Black Cat just put herself in a tougher spot with Peter and also opened the door to letting others use the same intel on her. Until she confesses to someone it’ll always be live ammo and that’s really dangerous for anyone who’s not a total villain.

The art is definitely really good here. Spider-Man’s symbiote suit is really sharp and all of the colors are on point. This comic can hold its own with any of the others and this also makes for a lot of great fight scenes. You’ll be blasting right through the volume. Then you’ve got the solid writing backing it up as well. It seamlessly works in with the era where these stories take place.

Overall, Symbiote Spider Man is definitely a really solid trade. I always like seeing the symbiote suit in action and the fact that it can fight on its own is also really good. Even when Peter is knocked out it can think and fight which happens once here. The only odd scene was when one part of the suit didn’t want to join with the rest. It just struck me as odd that it wouldn’t readily join with the collective especially since Peter is usually its favorite host. I feel like it only left to force a big fight for the climax which was fun, but they could have written around that. Nonetheless, this suit is an improvement over the classic one, especially since it can turn into any other costume it wants to be. If you haven’t checked this comic out yet then you should change that. It’s not every day that you get to see Mysterio get a super form right?