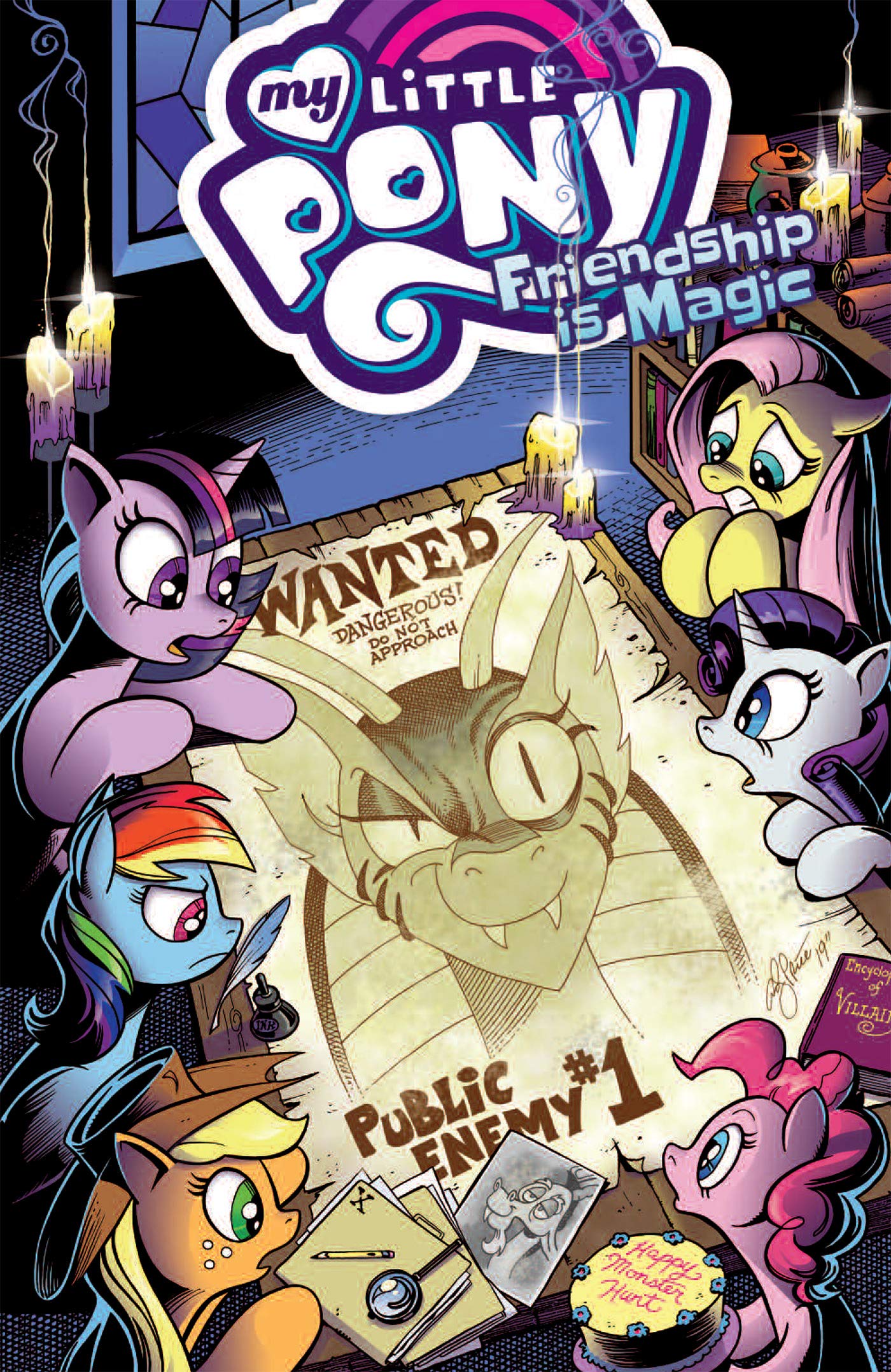 It’s time to look at another MLP volume. This one surprisingly has a large story arc with only one stand alone adventure contained within. As a result I’d definitely say that this is one of the strongest MLP comics I’ve read in a while. The new villain is pretty epic and it’s nice to have some real action scenes in here. The only missed opportunity is that Starlight Glimmer didn’t show up even though she was mentioned a few times. Now that’s just a tease.

The first issue is about Zephyr being a little nervous about his mane styling skills. He goes to a whole event for it, but he just can’t find the confidence to get up on the stage. Fluttershy has to remind him that it’s always tough going up in a crowd, but you’ve got to do it if you really want to improve. Eventually he gets the memo and goes through with it. It’s a nice enough comic, but Zephyr was never one of the better characters. I also think adding in another pony who seems brave but actually gets terrified was a little cheesy. I get why she was included as it helps with the moral, but I would have been okay with Zephyr being the only one who was nervous and he learns that sometimes you just have to face your fears straight up.

The real story is about Cosmos though. A long time ago there was a being named Cosmos who was incredibly powerful. Together with Discord she nearly brought the planet to its knees. Unfortunately for her Discord was not quite on board with her violent tendencies. He likes causing chaos and at times that will hurt ponies, but Discord doesn’t like destroying them outright. As a result he betrayed her to Celestia and Luna who sealed her into a bunch of rocks. Discord hid the one that he found and then allowed himself to be turned to stone since he felt guilty. Well, thousands of years have passed and Cosmos has returned. She is currently possessing the body of Twilight Sparkle and commands Ponyville to find the rest of the crystal shards. Can Discord stop her plan before it’s too late?

This is the kind of story that would have really worked out quite nicely as an MLP special or even as a movie. Cosmos is a villain so powerful that all of the original pony powerhouses had to team up to stop her. That just makes for a great threat and her design is also quite fierce. She reminds me a bit of Tirek from when he first showed up before getting nerfed in the final season. Unlike the other villains she isn’t coming close to being redeemed either. All she wants is to absolutely crush the heroes beneath her heel. She will not be granting them any mercy and that’s really what you want to see in a villain.

This story also has quite a few parts so there is plenty of time to introduce all of the characters and get them set on their side quests. Some characters like Pinkie Pie can’t stay serious long enough to actually contribute but for the rest of the characters it’s just really great to see them up and about. Some characters like Zecora are suitably cautious while others like Rainbow Dash just run in without thinking. They all bring something to the table and this is just a great arc. The fights hold up and there is little to say against it.

I guess as a slight iffy moment Big Mac loses in the most embarrassing way possible. I’ve never liked the character anyway, but this really doesn’t help his case. Meanwhile Twilight doesn’t look her best here since she can’t break the hypnosis, but once she’s freed she looks reasonable. The comics just show that Cosmos is far too powerful to be stopped by the average pony. Discord is still as powerful as ever, but as always he loses to the new threat. With his reality warping abilities I feel like he should be able to defeat just about anyone, but I suppose in his defense he does have a history with Cosmos so that causes him to hesitate a bit. The real question is whether or not he would be able to claim victory if they were both going all out. I like to think Cosmos would win, but in theory it’s hard to see why Discord wouldn’t.

Of course the comic couldn’t resist taking one shot at Celestia. We find out that she tossed one of Applejack’s gifts into her forgotten lair with all other kinds of dangerous objects and junk. That implies she was making fun of the object by either calling it super dangerous or saying she didn’t like it. Applejack took this pretty hard and I can see why. If you don’t like a gift then you at least need to hide it really well. Putting it in a spot where it is seen as “bad” just makes the issue worse, but it’s the kind of power play you’d expect to see from Celestia.

The artwork is definitely fun here. It’s very expressive so you can see the looks of shock and horror on the ponies as they deal with a threat that seems to get worse and worse by the minute. It’s easy to read through and you can still get a good feel of the scope. Some of the imagery here almost looks like something out of the 90’s X-Men adventures like the Inferno arc. Cosmos’ ability to turn things crazy makes for a lot of great visuals and the artists took full advantage of this.

Overall, This is definitely a volume I would recommend checking out. It’s the perfect volume to look at if you believe the My Little Pony is just about happy ponies having a lot of fun. This one shows that there is also that element of danger always around the corner and I’ll be interested to see how the comics intend to top this arc. In theory this is already around the power level ceiling of the series, but maybe next time we can get a serious villain group. The series hasn’t really done that yet and a group vs group fight would be a blast.