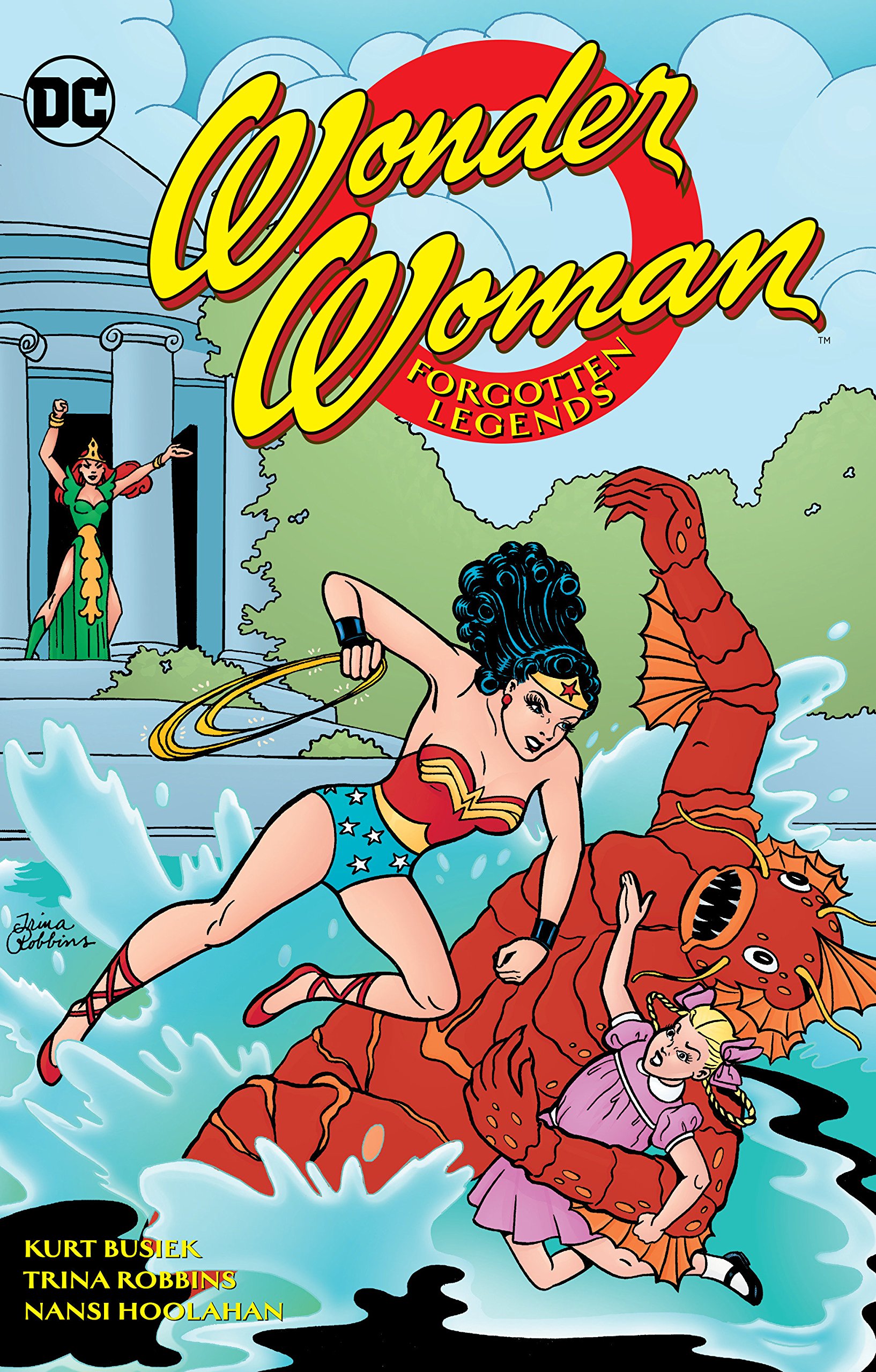 It’s time to look at a Wonder Woman comic. It’s been quite a while since I read one of her trade paperbacks. This one seems to take place right after one of the big DC crisis events. I think it may have been Crisis on Infinite Earths which would work out pretty well since the CW is about to air their version. It was a pretty big deal having the universe merge together and such. In a way this trade is to allow the Amazons to remember some of the good times before they vanish.

It starts off with Wonder Woman’s mom looking into the Crystal Ball at one of Wonder Woman’s biggest adventures. The Amazons are getting ready to all be vaporized as the universe ceases to exist, but they are all feeling rather down at the moment since Wonder Woman is no more. Perhaps looking at her greatest exploits will help them return to the afterlife in a smoother fashion. The Queen is also determined to keep her memories of Wonder Woman and would prefer to have them and be a star than to live on with her memories wiped. I don’t really blame her since having your memories wiped is never any fun. It’s always better to remember each and every detail for as long as you possibly can.

The main story is about Wonder Woman helping to protect a parade from any possible attackers. The attack turns out to be a lot more dangerous than the heroes could have imagined. A powerful lady named Atomia has conquered her world as well as many others and now Earth is next. She manages to enslave Steve Trevor and also kidnaps Etta Candy’s daughter. This little girl has now been transformed into a full fledged villain as well. She’s a little kid so while you can’t take her too seriously, she is definitely well aware of what she is doing so it’s hard to like the kid at all. Wonder Woman will have to save everyone and stop this threat to the planet but it won’t be easy.

Atomia makes for an interesting villain. She may be more of a typical conqueror than some of WW’s other enemies, but what helps her case is that she’s succeeded. She’s actually conquered many planets already so she was on a bit of a winning streak before Earth. Naturally this was one location that was a little too much for her, but she put up a good fight. Her decision to get the kid on her side was also pretty smart since it can result in having a good hostage. Atomia did let her guard down a bit quickly here though.

Then you have the two princesses of one of the other worlds she was targeting. I wasn’t a big fan of them for different reasons. One of them wasn’t great because she was a traitor. Even if she saw the light by the end of the issue it was way too late to even begin to trust her and it was too soon to forget the betrayal. The other one was a little too oblivious and got suckered too easily. It’s all well and good to give the villain a second chance, but maybe making her one of the rulers was a little too much.

Steve Trevor looked pretty good here and I dare say that it was one of his best appearances. He manages to hold out for a super long time even while poisoned and organized a whole resistance. This is one issue where he really did assist Wonder Woman quite a lot and wasn’t just around as a hostage or anything like that. Meanwhile Wonder Woman looks good as always. She has a pretty good grip on the situation and manages to basically foil an entire planet ending threat. She even pretends to be captured for a bit to try and talk sense into the villains, but that didn’t really work since they were totally on the evil side.

The comics are written and drawn in a way that really resembles Wonder Woman’s original adventures from many decades ago. It’s an interesting approach. The artwork looks good, but I do have to admit that the modern era stuff always looks better than this super retro style. The action scenes and such naturally don’t pop out quite as much as they would, but I do have to give the comic full credit for fully re-creating the look. You really would not be able to tell that this is a modern comic because even the writing is old school.

There are two bonus stories at the end though. One of them involves Wonder Woman returning to help the Amazons when they are rendered powerless by an invasion of men. It’s still pretty unfortunate for them that they lose all of their powers as soon as a guy steps ashore. It’s a pretty big weakness and it does give a little credit to the queen’s argument on why the island needs to keep its protection. The main problem here was that they only opened the borders for a split second, but I don’t see how much better it would be if they had opened it permanently. It would just be even more people and they all have guns so that’s game over. Wonder Woman still does a great job in saving them all and getting them their powers back, but this time I’m not really sure I agreed with her assessment.

The other story is about a kid whose wish for a monster causes it to be real. Wonder Woman helps him learn that monsters are cool and all, but at the end of the day what he really needs it the ability to protect instead. This helps the kid protect his sister and he learns that you have to be really careful as to what you wish for. The story is less exciting than the last one, but it’s still got a pretty good message there. Wonder Woman’s stories usually tend to have good morals like that.

Overall, Wonder Woman: Forgotten Legends is definitely a fun comic. It’s got a good story and solid writing to back it up. I don’t think you’ll be remembering it as one of WW’s greatest adventures, but it does serve its purpose as a lost story. It’s nice to have one last adventure from this era before jumping into the new timeline. Any fan of Wonder Woman or long-time DC comic reader should find lots to appreciate with this adventure. It’s less about Wonder Woman being a big time superhero who is saving planets and more about how she was always a role model and inspiration to the people she saved. She continues to save the day while setting a great example.