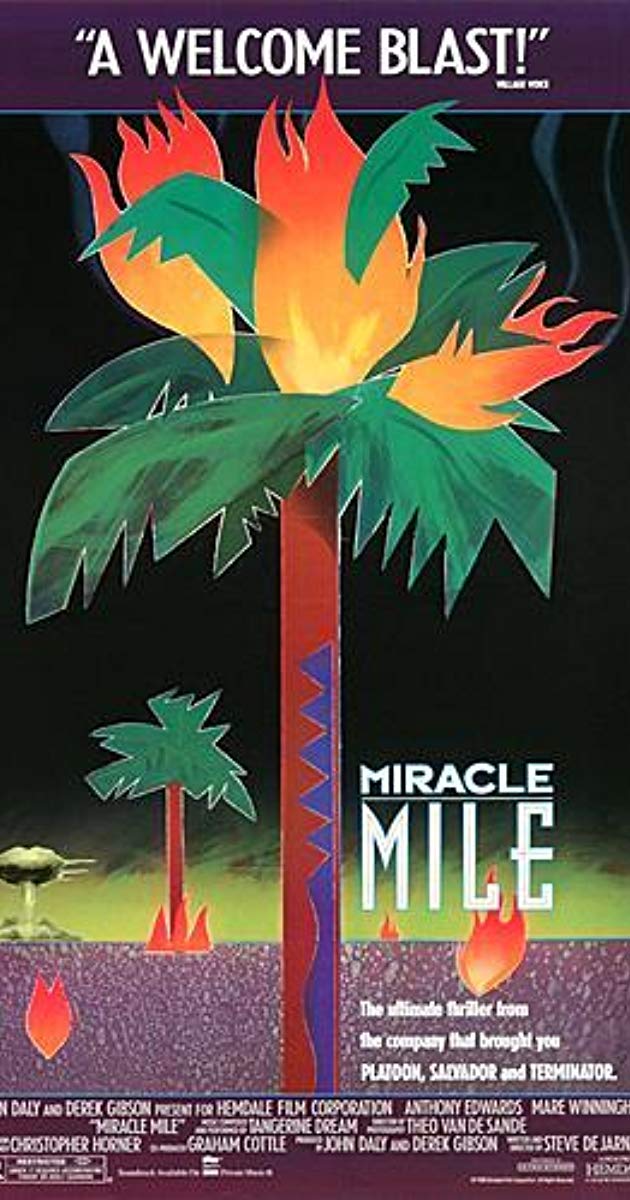 Time to look at a panic movie about the end of the world. It’s always been an interesting question on how you would spend your last hours if you knew you were about to die. A lot of people would prefer not to know if they’re about to die, but honestly I’d be all for it if I actually believed there was a way this could be done. Lets say I only have 10 days to live right? I would spend that time getting all of my favorite foods and playing my favorite games because the end is nigh so I may as well forget about the cholesterol for a few days. Of course in real life there would always be some doubt on if things were actually going to end so I wouldn’t be able to do that. This would only be if destruction was a guarantee. Regardless this is part of the basis for the film’s plot.

It starts out with a few scenes to introduce us to Harry and Julie. After hanging around each other for a while without really getting to talk they finally hit it off. Harry is looking forward to being with Julie forever and ever. Unfortunately thanks to his alarm not working he sleeps past the time they were supposed to meet. By the time he gets to the cafe she is long gone so he leaves her a voice message and prepares to have breakfast alone. That’s when the phone rings and he eagerly picks it up only to find himself talking to someone named Chip. Chip explains that someone launched a bunch of nukes at us so we fired back and now everybody’s going to die in a few hours. Harry quickly believes Chip and makes a scene in the restaurant causing everyone else to believe that it’s finally happening. As the other guys get in a truck to head to Antarctica, Harry decides to find Julie first. Can he make it to her before they are all destroyed?

This is one of those films that’s a little tragic because the setup is excellent. I really couldn’t care much about the opening minutes with the two characters meeting. It really has nothing to do with anything, but I suppose it was the quickest way to show us how Harry and Julie met. Honestly we could have just started the film with them together and nothing would change. The setup I’m talking about is once Harry gets the phone call. He panics a lot as you would expect and then panics in the store, but it’s nice to see how some people start to believe him after a bit.

The shop owner certainly seemed like he was expecting the news at some point because he takes out a big shotgun and immediately heads for his evacuation plan. It’s cool to see so much unity with all of the characters as they get ready to leave. It’s such an emergency that nobody even stays back to try and get their things or anything. They just hop in and get out of there. There’s a lot of tension here with a pretty interesting cast of quirky characters. It was the start of a great thriller in the makings with all of the characters having to deal with the fate of the world on their shoulders. Who should they bring and who has to get left behind? Time is not on their side either so they have to move very quickly. Then you’ve got Harry who is the only one who heard the call so in the back of everyone’s minds they have to wonder if he was right or not. Yes, this film was going to be an amazing look at the end of the world…..and then Harry got out of the truck.

That was the biggest mistake the film could have made. It’s an interesting subversion here as the characters were all developed enough where you figure they are going to be important. At this point they never appear again and the film loses some balance. Harry heads over to find Julie and in the process he has to get a cab driver to help him out at gun point. This leads to them accidentally murdering some cops and the body count continues to rise from this point. Everyone begins acting in their self interests which seems to be one of the film’s themes. At the end of the day the film is trying to say that people will act in a way that suits them so everyone begins stealing and attacking people left and right.

The climax particularly puts some emphasis on this as a lot and I mean a lot of crimes are happening in the background. Fortunately the film doesn’t linger for long as if things got any iffier that would have hurt the film’s overall score. Even so, the film just goes into more random territory at this point like when we get the drunk guy on the roof. Harry and Julie also split up too often. After finally finding each other after a good chunk of the film you’d think they would have stayed together right? Nah, Harry wants to find a pilot so they split again and then Julie splits to find one too. The scenes make no sense and Harry should be a little upset at Julie here because it really messes up all of the plans.

Getting to the helicopter was their best chance so making everyone wait the whole time was pretty bad. It was interesting to see everyone else get ready for the apocalypse, but ironically Harry was the one holding everyone back. He also should have just told Julie what was going on right away so she didn’t have to hear it from a total stranger. It’s always better to hear things from someone you know at the very least. Think about it, it just makes so much more sense.

So in the end I didn’t like Harry or Julie. Julie was really slow on the uptake and went along with all of Harry’s bad ideas. I would have liked to have seen her just tell Harry that they should do something else at times. Harry didn’t seem to think things through a lot which would get him into more trouble. There was a fun few scenes where a random driver with a gun chased him in the sewers though. You’d think with the world about to end the guy would have better things to do, but danger does tend to make people act rather crazy. It’s probably why quite a few characters in the film continue to talk tough even after being held at gunpoint.

Then one plot that had a random ending was the cab driver. He went to get his sister which makes sense, but then somehow he messed up and they crashed? I suppose there are thousands of ways that could have happened, but it felt like this was just put in to add some shock value for the main character. It’s not like it furthered the plot at all and the odds of running into each other again in these packed streets with everyone running around was pretty slim. Fortunately for Harry the police had to try and escape the city so he didn’t have to explain much. The ending of the film is pretty decent though. The drunk guy took away from it a bit, but it plays out like you would expect.

Overall, Miracle Mile got off to a really good start, but I feel like it took the wrong route to the ending. It would have been a very interesting movie if it stayed with the original cast in the truck. That plot had a ton of potential and along the way we would have learned a bit about the incoming threat and possibly faced some opposition. A lot of the film would be based around the dialogue on the truck so it still wouldn’t need a whole lot of budget. I’m cool with all the mystery surrounding the characters as we don’t really know anything going on, but it’s not important anyway. The world’s about to end and that’s what counts. It’s just that having a bigger cast to bounce ideas off of is better than just having Harry run around. Still, if you want to look at a pretty unique look at the end of the world then this is a good one to check out for sure.