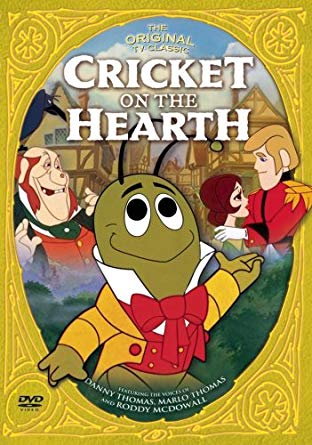 It’s time to look at a short Christmas film I saw last year. I haven’t seen too many films with a cricket in the lead, but typically it’s worked pretty well since crickets are just a lot of fun to hang out with. This one is a little weaker than the average Christmas title though because the characters aren’t great and the story is a little on the weak side. Still, it’s entertaining enough and makes for a good viewing even if you don’t need to see it again.

So the film starts off with Bertha and a nice young man being together. It looks like this will be a happy little romantic tale, but then he is called into war when everyone is drafted. Unfortunately he does not return and Bertha’s household is quite poor. Her father Caleb does his best to make ends meet as an inventor and falls into the hands of a selfish business man. The guy uses Caleb for all he’s worth but the man endures in the hopes of at least getting enough money to keep Bertha safe. Still, the situation isn’t getting any better and now this owner wants to marry Bertha. What will they do?

The plot may sound pretty terrible here, but there are a few details I left out. Why would Bertha ever even think about marrying this guy? Well, the trauma of losing her man was too much for her so she ultimately went blind. Then Caleb figured that he should try to let her think that everything is okay so he gave her a very optimistic look at things. He was not an accurate pair of eyes for her and he also made the corrupt business owner sound good which was his biggest mistake if you ask me. So as far as Bertha knows this guy is actually pretty nice and has helped the family a lot over the years. It’s all trust based upon a lie which is unfortunate.

Still, you can probably tell that this isn’t really my kind of plot. Everyone’s a little at fault here. Lets start with Bertha, she really shouldn’t have become blind just from hearing a lot of bad news. No matter how tragic it is it’s just hard to buy into that. I’d also have liked her to have stayed strong and not want to marry anyone. The man’s body was never found so if anything this would still feel like a rebound. Bertha just wasn’t a great heroine for me, she was too passive.

Then you’ve got Caleb who goes way to far in trying to make Bertha think things are okay. I don’t have anything against the sentiment of trying to help her get through this, but there are limits to how far you can stretch the truth before it just becomes a lie. He could have at least told her that the owner was no good. I feel like she should have been able to figure it out, but the lion’s share of the blame still goes to Caleb. He really took them down a dangerous path.

As for the cricket himself, he’s a good guy. At least he is actually trying to sabotage Bertha’s efforts, unfortunately the villain was actually quite smart. He figures out that it is the cricket almost right away which is really scary since most people would not have jumped to that conclusion so quickly. He sicks a bunch of animals after the cricket and then destroys them. Why didn’t he destroy the cricket? I dunno, but this guy was definitely pretty merciless. I was not expecting the gunshots at all, especially not in what was otherwise a light hearted Christmas special. The villain may not be a good guy, but he definitely knows how to execute a strategy as well as silencing underlings. The film handles this animal violence as well as it could with the whole thing being off screen as you just hear the gun and the villain laughing, but it wasn’t exactly needed to show how ruthless the guy was. If anything then the film should have given him human underlings to bump off. Nobody would mind them getting shot away.

The animation isn’t bad. It’s definitely got that retro feel to it and flows pretty well from scene to scene. I don’t think it’ll come across as all that memorable, but works out well in what it sets out to do. Meanwhile we get a few songs. They all basically sound the same, but are also solid. I can definitely work with these and it does give the film a grander feel even if the plot doesn’t really warrant it. I’m always up for seeing some songs in a film.

Overall, Cricket on the Hearth is not a film that will really be making my rounds in future Christmas viewings. There just isn’t a whole lot in this film to make it stand out in the crowd or compete with the bigger titles. The characters aren’t all that likable and the cricket isn’t as helpful as you would expect. He loses just about every fight he is in and never seems to be a match for the villains. He just gets lucky that they always choose not to finish him off. The main guy who vanished at sea has a plot twist that everyone saw coming, but I don’t think that quest aged well either. It’s not a bad movie so if you want to check out a quick Christmas film then by all means go ahead. It just won’t really do anything for you and you’ll quickly head back to something a little more classic like Rudolph The Red Nosed Reindeer.

2 thoughts on “Cricket on The Hearth Review”