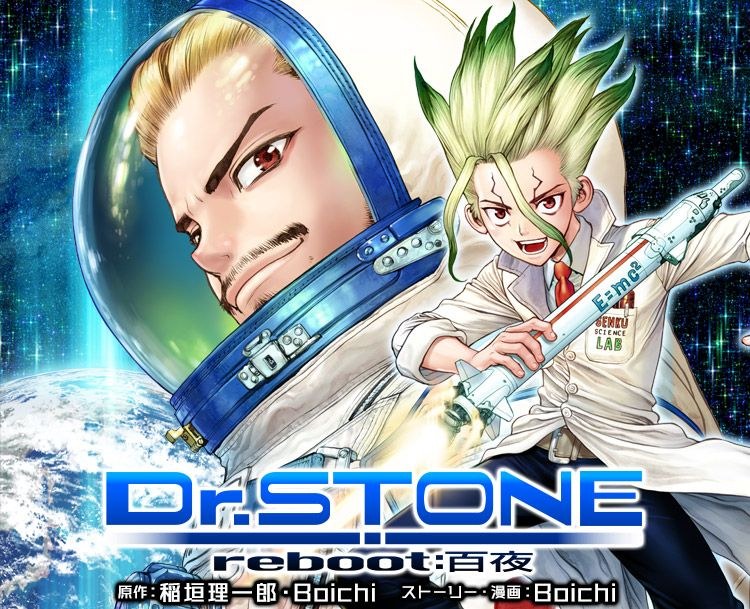 It’s definitely cool to see that Dr. Stone already got a spin-off. At only 9 chapters it is a pretty quick one but that’s fine. I think it would have been hard to stretch the premise out too long or it may have felt a little redundant. Either you have the original astronauts doing a lot of the same things Senku and pals have done or you stay up in space with not a lot to do. This spinoff is definitely pretty emotional though thanks to the addition of a new character.

The series starts by introducing us to Byakuya and his crew as they watch Earth get enveloped in stone. Byakuya figures they need to dash back to Earth. His crew is a little skeptical about this choice but eventually agree to do it. As they head out, Byakuya is forced to leave the A.I. Program behind to guard the ship. The robot says it will wait for the humans to return no matter how long it takes. Will it really be able to stay operational over the next 3000 years?

The first few chapters play out pretty similar to how Byakuya’s story was in the main series. It expands on some areas while cutting out most of the scenes we already saw. The spinoff was timed pretty well since the end of the series ties in really well with the current events in the main title. Somehow I don’t think Rei would show up until the final chapter of the series because she would probably break the immersion for many and would be a little too handy. In general this series is a little less realistic than the main one but it does show you just how advanced the Dr. Stone series could have been if not for the stone wave. If anything I think it shows that it is far more advanced than our Earth.

Byakuya is always a fun character so it was nice to see more of him. He’s quite different from Senku but still has that same determination and drive to succeed. Lillian’s a solid heroine as well and the two of them are the best members of the prequel cast. The rest of the characters are around but they don’t leave much of an impression this time. That’s because there really isn’t enough time for them. The rest of the series is about the A.I. Rei after the humans have gone. She aims to keep the ship in good condition but as the centuries pass it gets to be a difficult task.

I have to admit that Rei’s plot isn’t quite as interesting and since it’s over half of the series that means this isn’t going to be a title with a lot of replay value. Her chapters are almost silent as she fiddles around with some tech and keeps putting upgrades in the ship and on herself. By the end of the series she has her own robot body which is cool. I do think it would be a waste to not have her ever appear again so I would like a cameo by the end of Dr. Stone. I think Byakuya should have been straight with her and told her to come to Earth. Given how resourceful she is I have a feeling that Rei would have been able to pull it off. If anyone could, it would definitely be this A.I.

The art is definitely pretty solid like the main series. All of the characters are pretty well detailed and the backgrounds are solid. It makes for easy reading. I blasted through the series all in one go so it did hold my attention. The writing is solid as always and I’m glad to see Stone getting a spinoff already. Some series take a long time to get any so that’s pretty impressive for sure.

I am still a little surprised that the series wasn’t about showing more of Byakuya’s adventures, but since this was always meant to be a miniseries perhaps the author wants to save that for a spinoff. Ultimately it’s not like Byakuya’s group would go too far since we know how their adventure concludes, but I imagine it could still be pretty enjoyable. Rei’s story is certainly out of the box, but if she appears again then it’ll all be worth it. If she doesn’t return then I admit that will be pretty unfortunate. There’s still so much they can do with her even if she will be overpowered.

The ending does occur at the expense of Senku’s character though. He doesn’t notice a signal from Rei that I feel like he would have figured out right away. He knows that the event isn’t a natural phenomenon and the guy is always super curious about anything like that. Ideally he’ll notice at some point, but I think the series should have ended without her giving that signal. It would have made Senku look a little better at least.

Overall, Reboot is an interesting prequel. You sort of get the idea that it’s going to be like Attack on Titan: Before The Fall where it doesn’t really matter, but hopefully that is not the case. I believe this title would retroactively get a little more interesting if it does end up having an impact on the main title. It would be a nice crossover of sorts. If not? Well, this is still a fun little mini series. I imagine it’ll eventually get bundled together as a one shot volume so if you see it in stores I’d recommend picking it up.