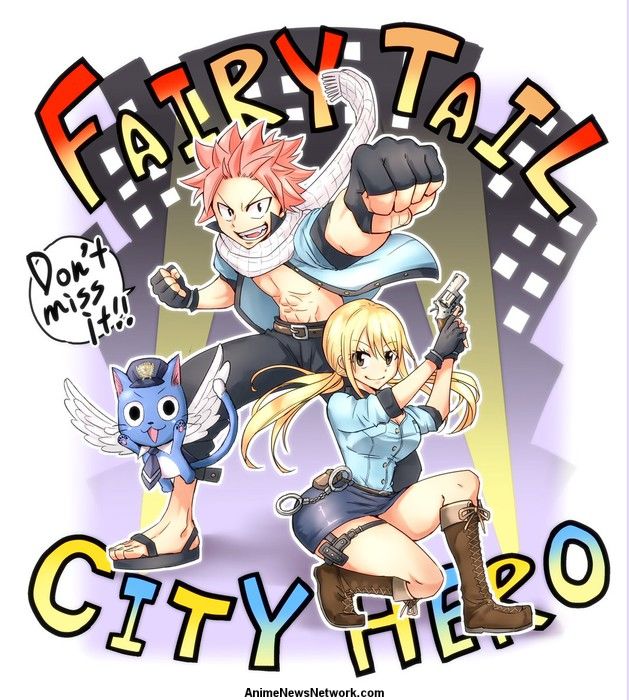 It’s time to take a look at a Fairy Tail parody that ended recently. Fairy Tail has always been a very tragic franchise because it has some of the best artwork and fights of all time but is heavily held back by the large amounts of fanservice contained in each volume. Would a light hearted parody have the same mistakes? Unfortunately yes. It never gets quite as serious or excessive as in the main series, but there is still enough here to keep this from being the quality series it could have been.

The general premise of the series is “What if Fairy Tail was a police squad instead of a guild?” That’s what the series runs with. Natsu and friends keep the peace in the land and do their best to stop any villains that get the idea of taking over the world. It’s not an easy job but someone’s got to do it. Keep in mind that this is still a parody though so it’s not taken seriously in the slightest. A bunch of villains and side characters from the original series show up and we get homages to other titles, but it’s all in good fun.

The chapters are all pretty episodic with every 2-3 being about a different case. Occasionally you get the hintings of a grander story with Zeref making a move, but that’s fairly rare. The stories certainly do vary in quality with some being very good and others being sub par at best. I’ll take a look at some of the stories although naturally we won’t dive into every one as that would be quite a lot. Before doing that though lets look at some of the technical aspects of the manga. 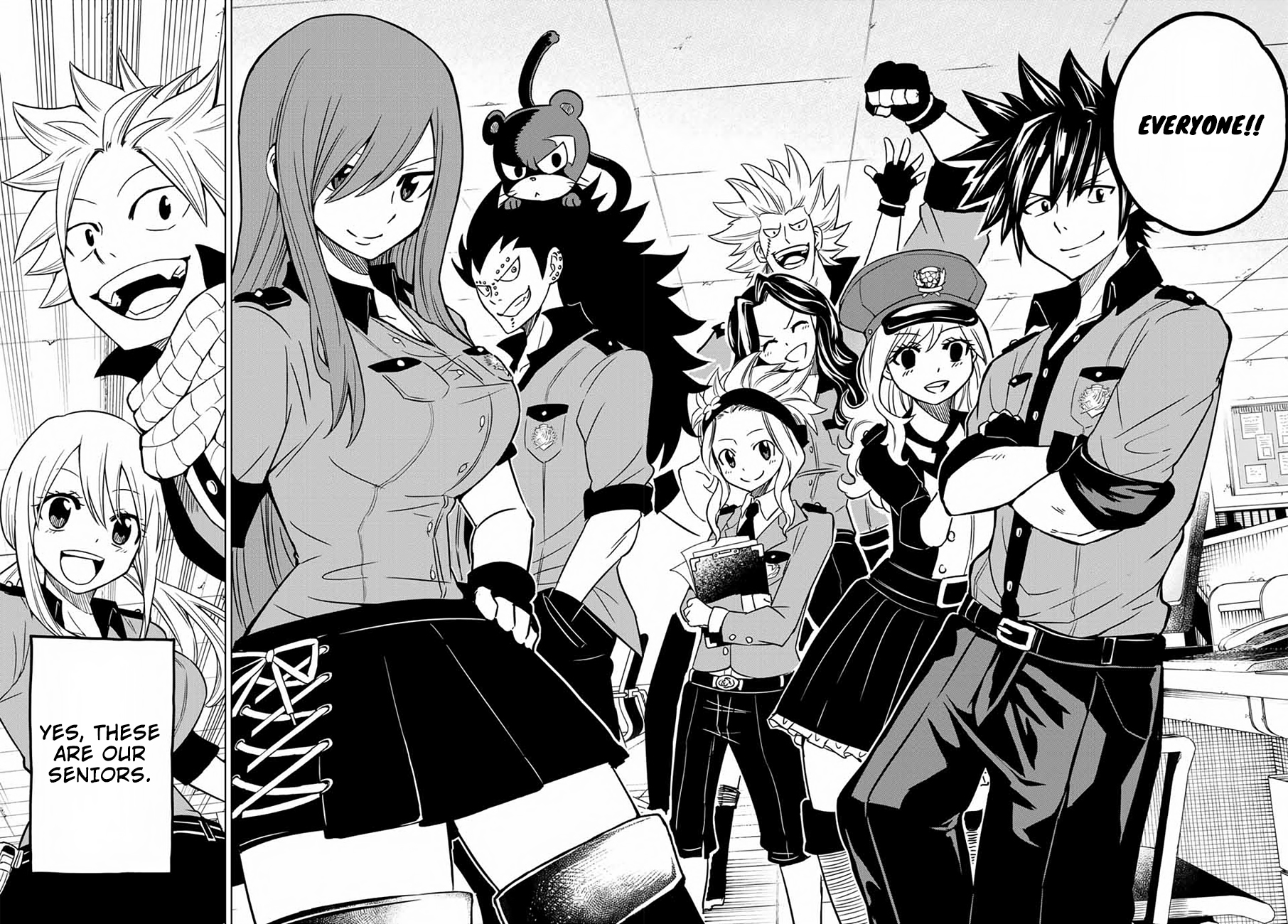 The artwork is top tier as you’d expect. The character designs are on point and when we do get a fight scene it looks incredibly impressive. You can tell that the artist isn’t phoning this in. There’s a lot of effort here and it’s appreciated since art does play a big role in how good a manga is. It isn’t the critical factor, but every bit helps. The writing is okay, some of the jokes land and others do not. On the whole the tone of the manga is quite good so I’d give that credit over to the writing department. This is a series that is fun to read and you can almost overlook the fanservice as a result. Almost is the key word here.

As always fanservice is the big problem in the series. While it is played for laughs it happens often enough where you are still forced to take note. Characters are teased by others or they get put in dicey situations due to the circumstances of the case. Sometimes the heroes are even used as bait which is always a dicey tactic. It’s never taken too extremely, but merely being present is an issue in itself. The series is pretty consistent with fanservice being in just about every single chapter in the first part and then it surprisingly gets better about that near the middle. Too little too late though so I’m afraid that I have to dock points for this.

All right, lets look at some stories. Ironically enough we’ll start with the final one which was one of the better ones. Basically Zeref is launching his big attack on the Fairy Tail guild, but is this really what’s happening? Some dancing and partying goes on so the heroes think that perhaps they were wrong to doubt Zeref. We get a quick fight with him and Natsu which was certainly cool. The manga has brief flashes where it pretends to be serious and these moments actually do work quite well. The series even ends with the slight cliffhanger where it seems like Zeref still has his real plan at the ready. In this universe I believe Fairy Tail will likely lose.

One story that was good was the parody of Phantom Thief Kaidou. Part of why it is so solid is because it’s a multi chapter story so there’s time for the plot to get going and there was surprisingly no fanservice here. Essentially a mysterious thief is going around stealing artifacts so Fairy Tail is called in to help. Erza in particular has an interest in this thief because he looks a whole lot like her bartender friend. The series makes it pretty obvious from the get go that it’s the same guy, but Erza can be a bit oblivious at times so the plot still works. It was a pretty fun story.

One of the weaker stories is about Lucy and Wendy infiltrating a school to find out what shady business is going on. They’re actually magical girls who defeat their enemies with songs which is likely another reference in itself. What holds this back is that the villain’s pretty iffy and the principal is terrible. The characters are a little too extreme here and the comedy doesn’t hold up. I don’t believe Lucy and Wendy can hold their own story nearly as well as when Natsu and the gang are around.

A good set of stories was Laxus meeting a princess who was undercover. It’s a classic story where he helps her look around the town and she gets to have a day as a normal person away from her royal duties. It’s a pretty wholesome story and the plot usually works pretty well. Laxus getting knocked out by some random muggers was a bit forced for the drama, but fortunately he did manage to get up after that. The story stayed classy and even had a pretty nice ending. It’s easily one of the stronger stories in the set.

There was a one shot story where Rogue and Sting got to appear and they certainly looked really good. They were fun rivals in the main series so it was nice to see them appear a bit here. It’s not very long of course since you can only do so much in a single chapter, but it was a good story all the same. Sometimes you don’t need multiple chapters to really get a fun bit across. Especially in a comedy/parody title like this. You’ve got other one shots with fun plots like the murder mystery of who destroyed Cana, but naturally that one couldn’t help itself and included some fanservice so it’s not quite as solid.

Another good one shot was with Acnologia showing up in the real world and wanting to see if anyone could keep up with him. This leads to him sharing a bowl of ramen with Natsu which was pretty cool. Natsu really shows him up and even has a great closing line about how he doesn’t want to be king before leaving which causes Acnologia to disappear. I suppose that just wasn’t what he was hoping to hear, but at least he got to pass away in peace.

As you can see the series is very entertaining. These could have easily just been side stories included in the main Fairy Tail series, but I’m glad it got its own series. I’ve always believed that it’s good to have as many spinoffs as possible. I don’t think it waters down the series, but if anything enhances it. Give everyone a spinoff, it gives the characters extra development if you ask me and I can’t turn that down. In this series we get to see how the characters would act in a police setting. If anything it’s a good excuse to see all of your favorite characters just hanging out and having fun in a non lethal environment. 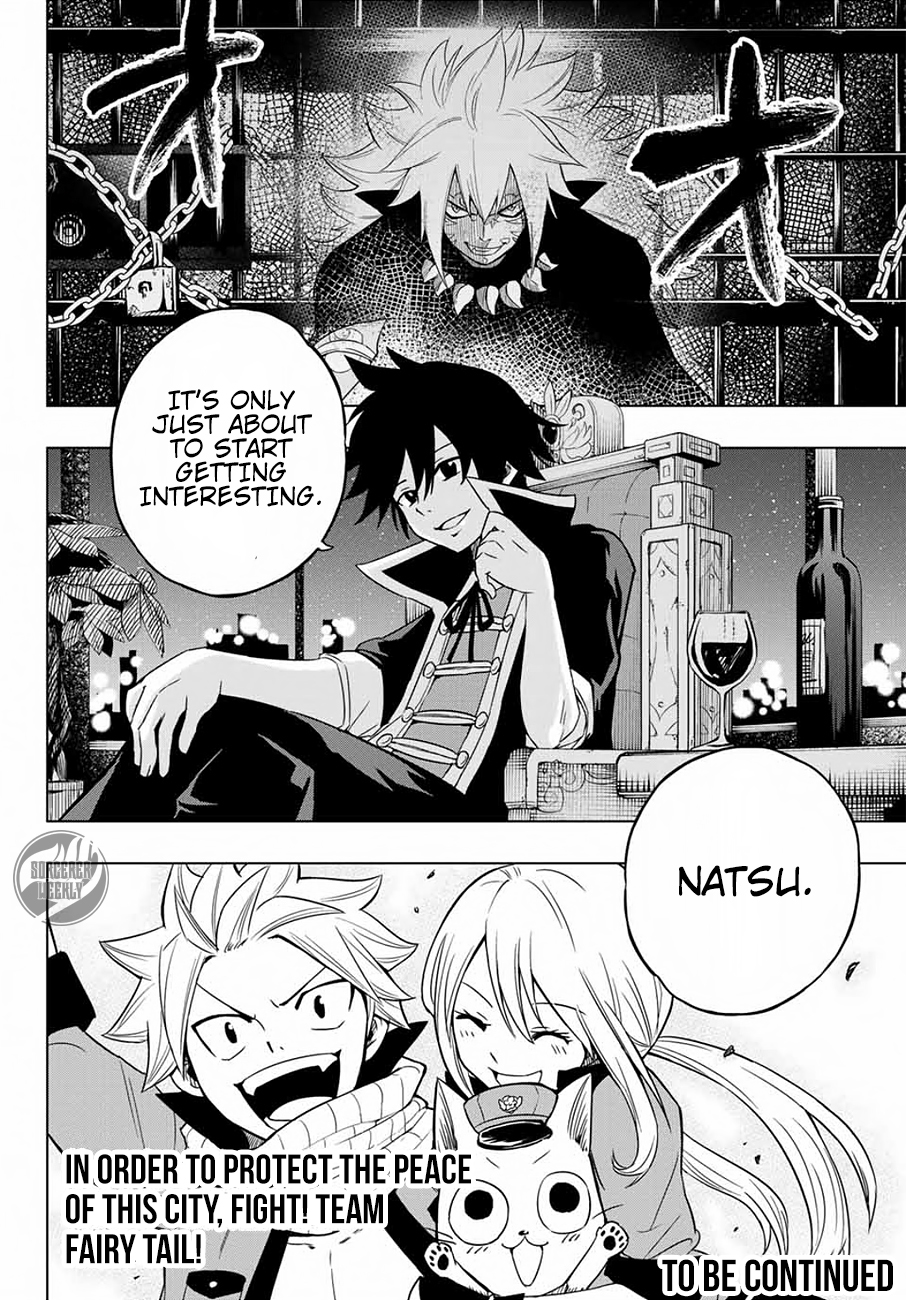 Overall, Fairy Tail: City Hero is definitely a unique title. I appreciate the fact that Fairy Tail has expanded into such a wide franchise over the years. It’s really done its best to compete with the other mainstream titles like DBZ, Naruto, and One Piece. I don’t believe it’ll ever quite eclipse any of those titles, but at least it’s still going thanks to the sequel series and may end up running for as long as those 3. If you’re going to read a Fairy Tail series then it’s better to read this one over the main title. That being said I’d recommend reading Ice Trails instead. It’s a spinoff about the best character, Gray, and it just works really well. It’s a story that you just don’t want to miss out on.