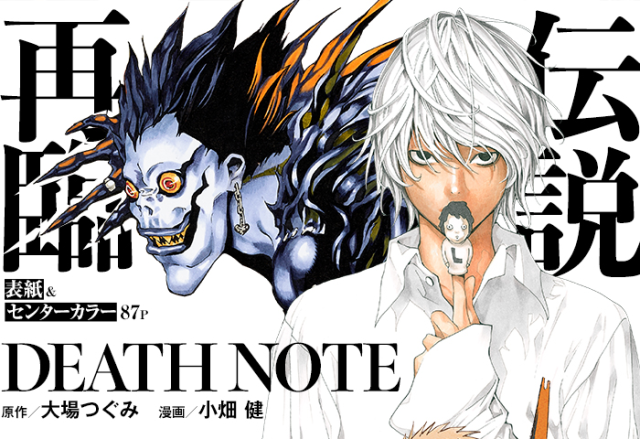 It’s been quite a long time since the original Death Note came out. Who’d have thought that it would ever end up getting a one shot sequel like this right? Light was one of the most ambitious main characters of all time and definitely a pretty awesome one. His descent from being a guy with good ambitions and ideals to a total mass murderer by the end was interesting. He was the kind of villain who had a fairly reasonable goal which made him fun to watch. Ultimately he could not win though. Can Minoru have better luck?

The one shot takes place many years after Light used the Death Note but was stopped by L. The Death Note is thought of as more of a hoax than anything nowadays. Ryuk has grown bored since without a human to play with he has no source of apples. He decides to bring the Death Note back into the real world and meets up with a man named Minoru. Minoru agrees to accept the Death Note, but he really doesn’t want to murder anyone. Instead he decides that he’ll sell the book and get rich that way. The book will go for an astronomically high amount of money so of course you can’t just tell it down the block. How can Minoru sell the book without being tracked by the cops or L? That’s the main plot of the story and the problem that he has to try and work around which makes for a pretty interesting adventure.

Right away one thing I liked about this series is the modern setting. A lot of good stories from back in the day would be fun to have re-done in the modern times because of how tech changes the equation. Minoru even mentions how most of Light’s plans wouldn’t work nowadays because of the increase in technology although he also concedes that Light would have simply come up with a different plan. It’s cool to get this epilogue to the original series as well. I certainly miss the original L as Near isn’t nearly as solid but it’s still nostalgic to see him. Near fans might not be happy at the fact that he is getting completely dominated for the entire chapter. There is never a page where he has the upper hand on Minoru and I will admit that I was a bit surprised at this. I expected him to do way better.

As for Minoru, I definitely liked him as a lead. He did a good job of not letting the power corrupt him. In the end his decision to part ways with the Death Note may not have been completely selfless, but he did a good job of spreading the wealth and ultimately allowing almost everyone to win. His ending really isn’t fair in a sense since he planned things out perfectly. There was absolutely no way for him to avoid the fate that he ended up receiving so I really can’t take anything away from him there. His bond with Ryuk may not have been as strong as Light’s due to the fact that Minoru seemed to think of him purely as a business partner, but I think they would have gotten along much better had they gotten to team up for longer.

Ryuk is fun as expected and we even get to see another Shinigami here which was nice. Death Note isn’t the kind of series where we are likely going to see all of the Shinigami since that would be for more of an action title, but the more we see the better. We also got to see other countries weigh in like the USA which was cool. The President also handled the situation pretty well here which involves a high stakes bluff. Sometimes all you can do is play the bluff and hope that it ends up working out.

The artwork is top tier as per usual. There is a lot of detail on every page and in general you can see the amount of effort that went into the story. The plot is well thought out and it could have been a good ongoing series if the author had wanted to do that. Hopefully this story is included as a bonus story in a manga he writes or something because it’d be sad if most people never end up hearing about this. It’s probably too short for an OVA, but maybe they could add some extra details. The Death Note franchise should continue in some capacity, there is still so much that they can do with the premise.

Overall, The story is only one chapter so there’s only so much that can be said about it. Still, I had no issues with the story at all. The characters were good and it had a nice blend of easter eggs and new plot developments to keep things interesting. The way that Minoru handled the sale was quite clever and while reading the story the first time you will wonder how he will be able to pull this off. I think the main morale here is not to be greedy. If you try to get too much at once then you will ultimately end up failing but if you settle for a bit then things will work out. Ironically the ending destroys that moral to an extent, but everyone else gets to have a good time so there’s that.