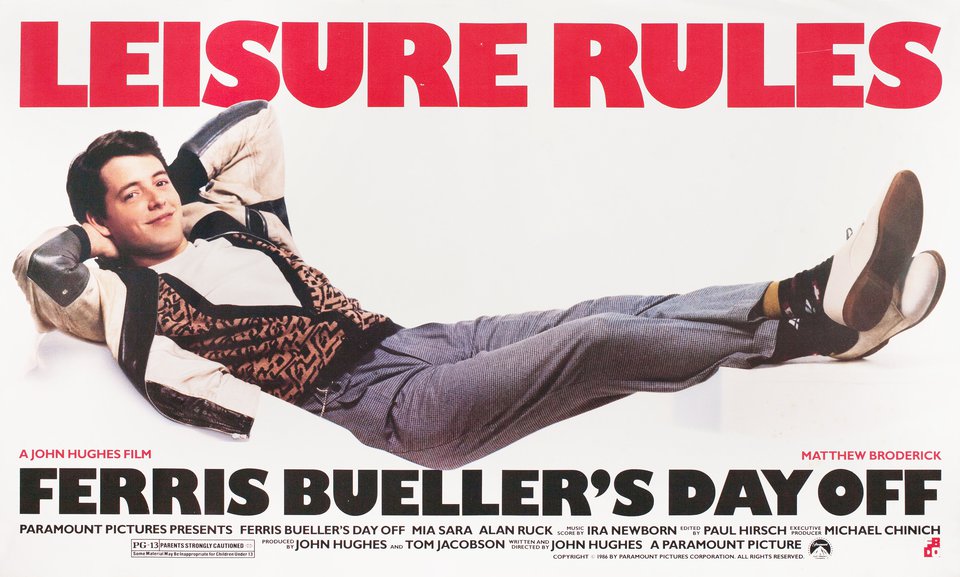 It’s time to look at a fairly iconic film from back in the day. Just about everyone’s heard of Bueller’s Day Off from back in the day. How could you not? It was basically a game changer at the time with breaking the fourth wall and those parts have aged pretty well. It’s a fun film where the characters go all out in how crazy they can get although Ferris and Rooney are carrying this film from start to finish.

The film starts off with Ferris deciding to stay home from school this time. It’s a beautiful day out so he really doesn’t want to have to miss it. He fakes being sick and then once his parents leave he is ready to have fun. He calls up his best friend Cameron and also gets his girlfriend Sloane to leave school early. The 3 of them then decide to do everything they’d want to do in a day including going to a parade, a fancy restaurant, a pool, etc. They have quite a lot of time to really do whatever they want to do over the course of the day. The only thing that could possibly get in their way is Ferris’ old enemy…Mr. Rooney.

Mr. Rooney is definitely the best character in the film. He’s the only character who is actually able to see what’s going on right from the start. The others are just being manipulated and tricked, but not Mr. Rooney. The tough part is just that he’s pretty much outnumbered right from the start. Even when he gets hard proof through the computer it gets deleted because Ferris is apparently a top hacker on top of being a genius and everyone’s hero. Rooney has a lot of confidence though and goes all in when he’s sure that he’s got Ferris beat. He endures quite a lot of punishment from the cast by the end of the film. At one point he even gets kicked into an unconscious state. That being said, this part wasn’t his best plan. Even if he did bump into Ferris at his house…what would that prove? The whole point is that Ferris was supposed to be at home sick.

Rooney does end up giving us one of the most tense ending scenes I’ve seen in a while. He’s forced to choose between getting on a bus with some kids of trying to make it home in his beaten condition. The problem is that once he enters the bus it’s actually his group of students which makes things even worse. His rep is really never going to be the same after that but since the school would be gossiping anyway I wouldn’t take it too hard if I was him. It just means he’s really got to get Ferris now, but it’ll be tough since even the police force is on his side.

As I mentioned, Ferris is the other character who looks great throughout. He has plans for just about everything and things always do seem to go his way. Whatever Ferris tries ends up working and a good reason for that is that Ferris took the time to get to know everyone. Everyone already likes Ferris as a person so that makes it easier for him to get away with things. If he already had a bad rep then things would be a little more difficult. One of the more emotional moments is when a drug dealer explains how Ferris is a good guy to talk to and has a lot of advice on various things. It shows that Ferris is going around really doing his best to help everyone he comes across. Now that’a selfless character.

Meanwhile you’ve got his sister Jeanie doing her best to bust Ferris. She is jealous of the fact that things always go well for him and wants to get him in big trouble. It makes her appear as pretty petty the whole time. It really shouldn’t matter to her and she should just attend school. She even actively goes out of her way to hurt people trying to help Ferris like when she threw away all of the donations for him. That was definitely a very mean thing to do. Her character is just too far gone to redeem by the end and her quick affair with the drug guy didn’t help matters.

She wasn’t my least favorite character though. That would have to be Cameron. Cameron is Ferris’ best friend and he actually was sick at the beginning of the movie. He spends a lot of time complaining about this and telling Ferris he should have stayed home. It’s a little late for that once you’re actually outside so that just makes him a bit more annoying. He panics quite a lot and then when he has his big moment at the end all he really does is mess up the car and put everyone else in even bigger trouble. Even if Cameron’s trying to prove a point, wrecking a car that is worth so much money is just a bad idea. It really doesn’t help anything and he’s just annoying throughout. Ferris probably would have had more fun if it was just him and Sloane.

Sloane’s a reasonable character although despite appearing throughout the movie it’s hard to really gauge what her personality is. She seems to enjoy just tagging along with Ferris’ adventures but otherwise probably wouldn’t be quite as wild as him. It seems like this isn’t exactly a new occurrence as she plays along with his scheme pretty casually and doesn’t tend to panic much. That’s how it should be, you gotta just take things in stride so Sloane did good.

The film’s at its best with Ferris messing with the adults and just having a lot of fun. He’s certainly done a good job of getting his room all tricked out so that he can run this scam. The only thing is that when you think about it, he’s got so many things set up that he must have done it more than once. His parents act like it’s the first time and usually he just cuts out school the normal way. If Ferris did plan all of this out for one shot then he really did put in a ton of effort. You may feel bad for the parents here because they do their best to be really supportive of Ferris throughout.

Overall, Ferris Bueller’s Day Off is a fun film. The idea of taking a sick day off on a beautiful day makes sense. Typically I would always take one sick day per semester too for kicks although I didn’t have to pretend to be sick since you are allowed an unexcused absence. Part of what really makes the film work is the big rivalry between Ferris and Rooney. You need that kind of dynamic for the film to work and both of them fulfill their roles perfectly. Cameron and Jeanie’s roles could have been axed though and it wouldn’t have really changed much. At times the film can be a bit exaggerated with how badly Rooney is beat up, but this does go hand in hand with the tone the film is going for. It’s an extreme comedy so some slapstick like that is to be expected. If you haven’t watched this film yet and are in the mood for a good comedy then I’d recommend checking it out.