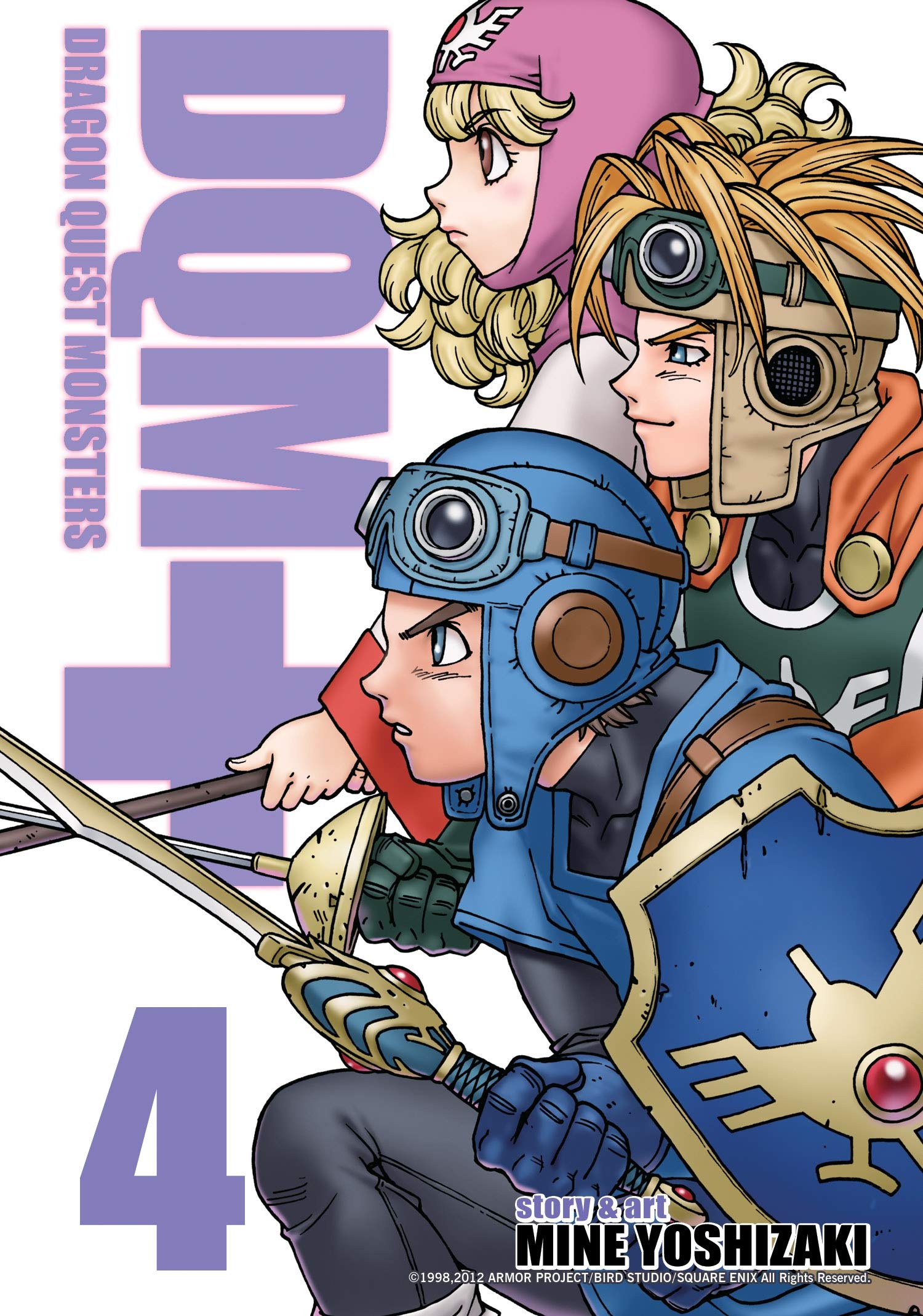 It’s time to look at my first ever Dragon Quest manga. Dragon Quest is a pretty huge franchise so it’s certainly nice to finally get a glimpse at it. I do own one or two of the games, but I haven’t had a chance to play them yet. The series always looks like a lot of fun with a colorful cast of characters and excellent gameplay. This one does a good job of getting in what appear to be the main mechanics while also introducing a lot of characters. Towards the end the series really starts to change gears before ending quite abruptly. I feel like it must have been cancelled.

The series starts by introducing us to Terry. He is the world’s greatest Monster Master which is effectively what they call heroes nowadays. He conquered evil and became the best, but one day he vanishes. His main monster was Slib who ended up staying behind. This takes us to our new main character, Kleo. Kleo lives in the human world and has always longed for adventure. Well, he gets his chance when a monster summons him to Dragon Quest world. He is quickly given the task of locating Terry and saving the dragon world. It won’t be easy but Kleo will find new monsters along the way and gain new strength. This will be key because if someone was actually able to defeat Terry then this won’t be an easy foe to take down.

First off I’ll say that what Dragon Quest really succeeds in is building a pretty big universe. The series is only 5 volumes long, but there’s a lot of content here. What the series takes advantage of is how big the overall franchise is. It borderline becomes a crossover by the end as you see characters from the various games show up to help. I mentioned earlier that the series changes gears and this is what I mean. At first it is all about Kleo and his quest on being a monster master, but this changes around volume 3. Then the focus shifts more to the old heroes as they fight an evil from the past. We see all of the old leads, get some big hand to hand fights, and it’s all pretty awesome. I gotta admit that I didn’t really miss Kleo at this point.

Kleo gets written out for quite a while but the other heroes handle the story so well that you barely notice. It also feels like a crossover when a hero teams up with Kleo. They may be from the same world but it feels like they’re on completely different dimensions with various rules of combat. If I could compare it to something it would be Tsubasa since that series mixes people from different realities. Had the series kept going then we could have really run with this concept a little more. It would have been a lot of fun, but as it stands at least these 5 volumes are quite memorable.

Unfortunately the series does slip a bit with the ending. There isn’t an ending. Now, I do like a good cliffhanger ending. I actually prefer for a series to end with a hype cliffhanger than to have everything wrapped up because this way there is always room for a sequel and you can rely on your headcanon to fill in the blanks. The problem here is that the ending is just a non ending which is different from a cliffhanger. There was a big rematch/battle that was hyped up all the way from the first volume and it never came to pass. The villain only appears for a panel or two at the end which really feels like a big shame. I can’t help but feel that something was supposed to happen but never did. 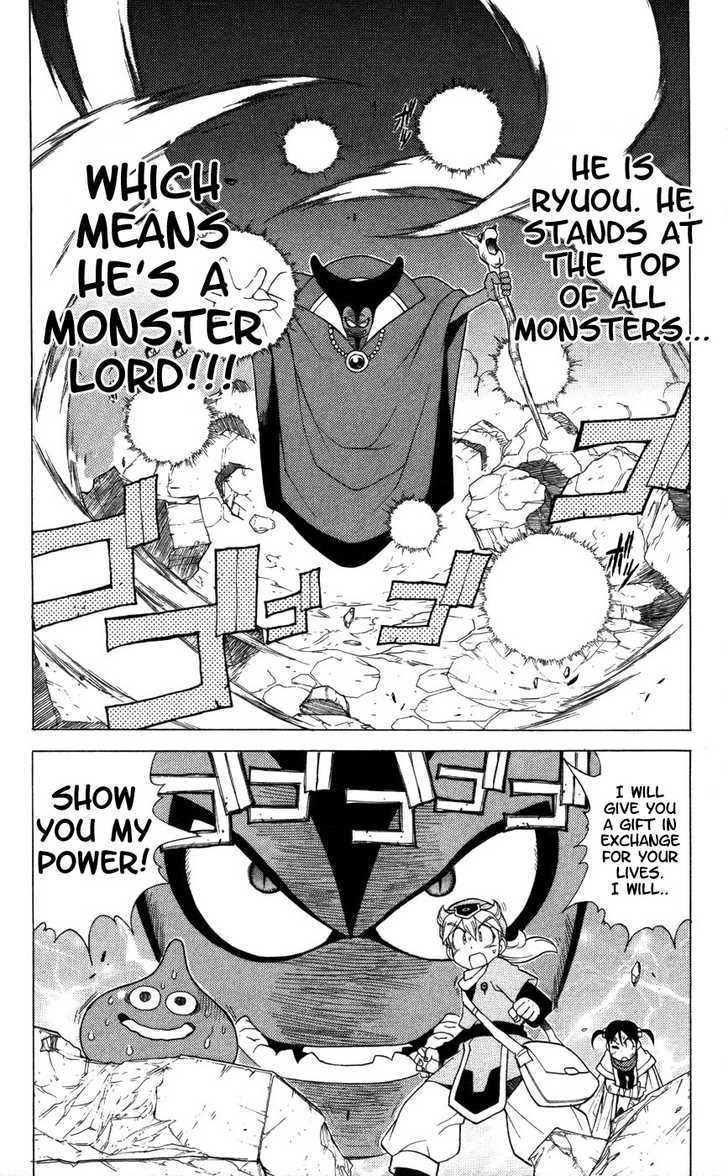 We get an epilogue what if story that has more time warps and alternate reality fighters running around, but it’s not nearly as satisfying. It’s similar to how in End Game the Avengers fight a different Thanos. It’s just not the same guy so it’s not as satisfying a victory. I wanted Kleo to have his proper fight and it just didn’t go that way. Perhaps this series will get a sequel some day although I don’t see that being too likely. You never really know I guess and that’s what you have to bank on.

The artwork is pretty solid. It’s got a nice DBZ effect and since some of the designs are made to be like Dragon Ball it works pretty well. The action scenes are on point and these guys feel pretty high tier towards the end. The larger spells are certainly a force to be reckoned with and the villains even get some super forms. You won’t have a problem blasting through the series as everything is pretty clear and never too cluttered.

Unfortunately the series does have a bit of fanservice randomly added in during the end. One character is always teasing Kleo but it never goes very far at all so I wouldn’t even count that. The only bit is naturally a hot springs scene was included and it’s a little more in depth than I would have expected. Fortunately that is really the only time it occurs but it was quite forced and didn’t need to actually occur in the series. Had we gotten more scenes like that then it would have definitely taken a higher toll on the series.

Now lets take a look at the characters. First up is Kleo who is basically your average kid. He’s always wanted to be a hero and now he has gotten his chance. He always wanted to fight monsters mano a mano but that’s just not the way that it works in this world. Gradually he understands how he is expected to fight here and does a pretty good job of it. I don’t expect he will leave a big impression on you but he’s not bad. Kleo does use more and more strategy by the end and his bonds with his monsters are why he is so powerful. I expect had the series gone on longer he would have gotten even better.

Then you have Slib who is never lacking in confidence. It’s a pretty rough road for him since he used to fight with Terry who was the champ so Kleo initially felt like a downgrade to him. Gradually they got used to each other though. While Slib may be a pretty proud monster, he always makes the right decision in the end. His training also made him even more powerful DBZ style as it even came with a humanoid super form. The banter between Kleo and Slib was always fun.

Then there is Terry who was my favorite character in the series although he lost a lot of ground after the big reveal in volume 2. Basically his mind wasn’t strong enough to stay on the light side and so he got persuaded to join the monsters. We never get to see a whole lot from his side so ideally there was more to it than that, but we’ll never really know. It just makes Terry look very weak. It’s not like he’s taking orders from anyone at least. Even by the end Terry seems like the strongest character in the series but I really would have liked for him to have stayed as the ultimate hero. Even if he was defeated it would have been a very powerful moment. The idea of the ultimate hero losing and a new generation having to step in is always a good one. I guess I can’t say that the series dropped the ball here since it’s the whole premise, but I think the series would have been even better had it not gone this route.

Laran is the main hero who appears for a good chunk of the series. There was actually a hero who appeared earlier and also had a good role, but Laran is the one who ends the series off. Interestingly they work under the old rules too so if they die then they re-spawn somewhere else. While that does lower the danger for them, they still don’t want to die because they they’re leaving the town defenseless. The heroes can never lower their guard and Laran ultimately has to team up with a lot of heroes to take down the final villain. I would have been cool with Laran being the main character for the whole series. There was a lot of potential here and he was just fun.

Maruma is a heroine who shows up later in the series. She was on the villain side, but never even really knew why she was. Maruma is eventually shown the light, but she can be a bit too trusting. Since she doesn’t do much until the final volume there isn’t a lot of time for her to get a role, but she’s solid. Maruma is the kind of character where the template is good and you more or less know how her character would go even if we didn’t see it. Her array of monsters was certainly impressive and one of the strongest groups we got to see.

Pazuzu and the Demon Lord were the two big monster villains. Both of them got sizable roles and definitely gave the heroes a run for their money. In the end Pazuzu was the most impressive one though. Like the various heroes Pazuzu was able to keep coming back to life over and over again which takes real skill. He went through a lot of super forms in order to keep testing the heroes limits and had a solid design. Now this was the kind of guy who could strike fear into the heroes and I’d expect no less from the series. 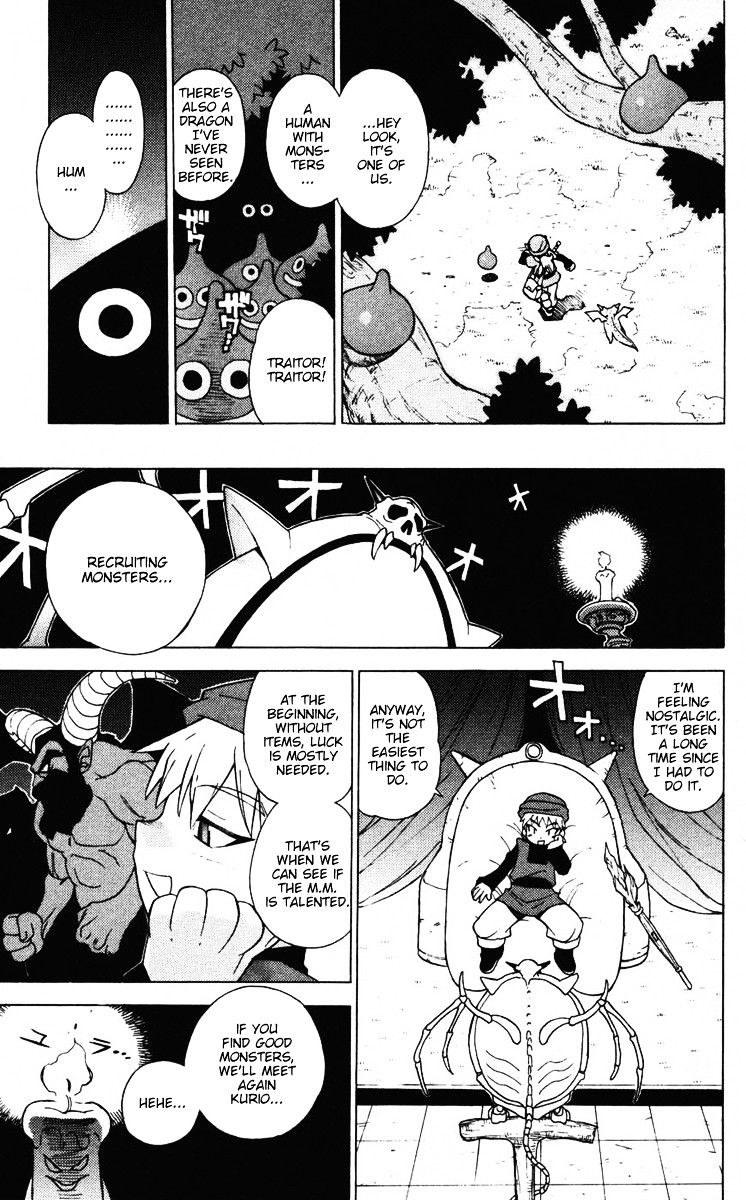 Overall, Dragon Quest Monsters+ is a pretty ambitious manga title. It feels like the big Dragon Quest crossover that I’ve been waiting for. With so many games it makes sense to have a crossover title like Fire Emblem Warriors. I believe Dragon Quest did get its own beat em up like that so now we have a crossover in the games as well as in the manga. Not to worry though, you can read this one with no prior knowledge of Dragon Quest and still understand what is happening. After all, that’s exactly what I did and it worked out quite well I must say. There are a lot of loose ends you’ll notice in the series like various monster hunters appearing and never getting to do much. I stand by my theory that the series was cancelled. Even though the ideas may not have finished being executed, it was still a really solid ride and I’d recommend checking it out.