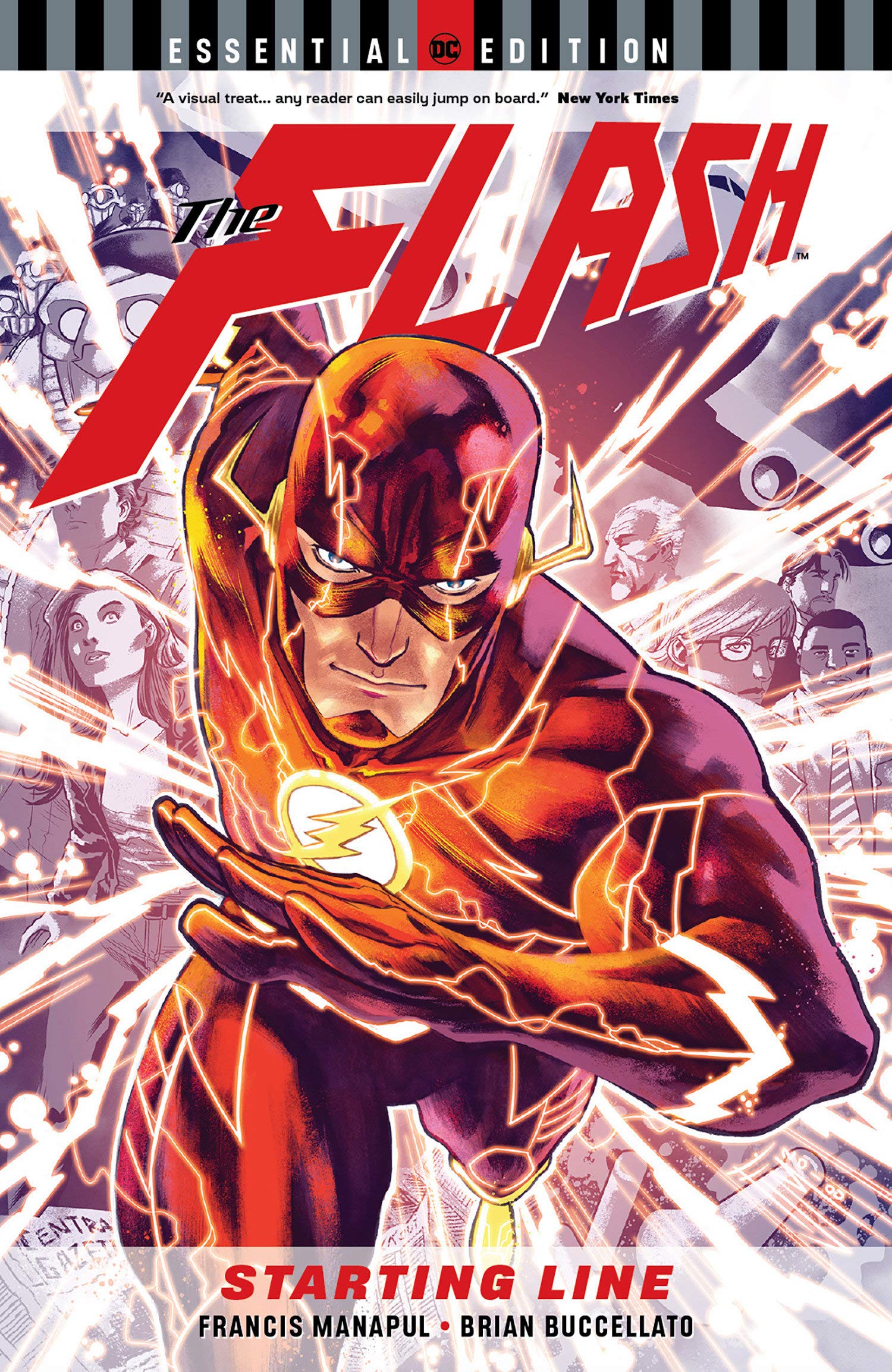 It’s been a while since I read a comic, especially a Flash one so it was good to see the ole speedster back in action. It’s a fairly modern one too so we get to blast through the origin stuff and get right to the adventures. The Rogues get a solid revival and quite a bit happens here. The story sets up a lot of future plot lines that’ll keep on going for some time so this line is off to a good start.

While each issue has a different villain for the most part there is still a larger plot in the background. The Flash used to be a very well liked figure in Central City but lately people have been turning against him. The cops think he is a wild vigilante who causes more harm than good and the reporters are all trying to frame him. One of Barry’s best friends even betrays him to run a social experiment. The guy has a point that they weren’t all that close though. Only Barry really took it hard while to the friend it was just good business. It’s why you certainly have to be careful on who you trust because some will turn around and back-stab you quite quickly.

It always makes for an interesting plot to see everyone turning on the Flash or whoever the hero of the adventure is. It’s annoying too as you can easily lose respect for these characters. The fact of the matter is that the Flash has saved all of these guys time and time again. It’s a bit late in the game for people to say that they’re better off without him. I could never comprehend the argument of the hero attracting trouble. If Flash wasn’t around then the city would have been destroyed many times over. You need a super hero when it comes to tricky cities like this. Otherwise the villains will just have their way. You also can’t do much better than the Flash. With his speed there is always a chance that you can be saved.

The first main arc deals with Mob Rule a lot. One of Barry’s old friends went missing one day. He has returned, but seems to now be a villainous sniper who is way in over his head. Barry tries to talk with him about this, but it’s a complicated situation. Some experiments were done on Manuel and now every time he is injured or a part of him is severed it turns into a whole other him. Now they are an army known as Mob Rule and they want to find a cure. The downside to having all of these clones is that they die after a few days. They kidnap Manuel and work on a bunch of cures but nothing is working and the group is getting more and more radical. Barry has to try and get Manuel out of this while he still can.

It’s more of a mystery thriller than the other Flash stories. Not only is the mob pretty discreet and hard to stop, but Flash has also been creating a lot of temporal anomalies lately so he is’t sure if he should be running full blast. I’m not a fan of Manuel though. He does seem to start a lot of the trouble which gets him into these sticky situations. He’s also quite quick to ditch Barry which puts him in a lot of danger. Finally the guy had no real gratitude to the Flash for saving him. Somehow he did the mental gymnastics of saying that it’s Flash’s fault that the cure didn’t work when it was obviously about to destroy him anyway. Everyone was really giving the Flash a hard time throughout the whole series.

The other big arc in the series saw the return of Captain Cold. He blames the Flash for the big blackout which prevented the hospital from helping his sister out when she was in critical condition. He now wants the Flash dead so their fights are a little more serious than usual. Flash just got done dealing with a crazy guy in the Speed Force who was messing things up so he doesn’t have a lot of time to worry about this. Captain Cold’s new freezing abilities make him much more of a serious threat than he used to be though. The fact that he naturally makes the Flash slower is quite handy in a fight. We also get to see the rest of the Rogues show up as they banded together under a new leader known as the Golden Glider. She wants the Rogues to be a purely evil group as opposed to what she considered to be weak tactics under Cold’s leadership.

They’ve got a very different approach on how to run a group. Cold believes that having an honor code is best and he does seem better equipped to be a leader. It is hard to keep that level of nuance while you’re a villain group though. I don’t see most villains really playing ball for very long. Most of them are in this business to murder the heroes and civilians. Captain Cold also isn’t a strong enough fighter to keep them in check. He was having trouble with Heatwave who isn’t exactly known as a powerhouse. Regardless, he does have a lot of experience and credibility though so people tend to listen to him. Golden Glider’s leadership was fairly short lived although I doubt her ambitions are over for now.

I mentioned him briefly before, but Turbine is a guy who was stuck in the SpeedForce for decades. I really don’t blame him for trying to get out. Flash guilt trips him because Turbine’s attempts for hurting the planet, but what else could he do? The Flash can’t reasonably expect this guy to just stay stuck for his whole life right? Turbine seems like he’s going to end up turning evil, but at least right now he seems pretty reasonable to me. The guy just wants to get home and Flash seemed to have absolutely no sympathy for him.

Meanwhile Iris gets a smaller role than usual as there is a new heroine around. This has allowed Iris to get her own plots away from Barry though. She’s now more of a detective/reporter like Lois Lane to the point where I’m sure they’re basing this interpretation on the iconic DC character. She’s an interesting character and this is probably her best portrayal. I think there’s a lot the series can do with her so hopefully she doesn’t go back with Barry. Patty is the new character involved with Barry and she seems reasonable. The relationship doesn’t seem too stable though since she can’t stand the Flash. Whenever the heroine doesn’t like the hero form you can’t help but think that things won’t really end well. That’s just too big of a split to remedy since the hero has to break the news at some point right? At least she does seem quite loyal when Barry is around and does her best to help him out. Patty has connections and skills in her own right so she can contribute quite a lot when it comes to detective work and solving cases.

There’s a whole plot with Gorilla Grodd which serves as his origin. It’s the least interesting part of the volume although it’s not like it’s bad or anything. I just can’t bring myself to care about them at the moment and the Flash getting amnesia felt incredibly convenient since otherwise he could have gotten out of there pretty easily. They’re clearly going to have a big role soon so we’ll see how that goes. I’ve never been impressed with Grodd’s strength even if he is technically considered to be one of Flash’s deadliest opponents. Give me the Rogues any day.

I basically talked about everyone except Barry so let’s take a step back here. Flash is a solid lead who does deal with some issues at the beginning but ultimately gets past them. He realizes that his speed is necessary to saving the world and stops overthinking things. He’s trying to learn how to speed up his mind as well and once he does this he should really be a super powerful hero. The Flash is already one of the strongest characters in DC if you ask me so if I were the writers I would make it take a super long time for Flash to actually master this technique. It’s effectively Ultra Instinct in the DC world. Barry’s always been my favorite Flash because he’s also got those detective skills on top of his super powers and he’s a very reasonable guy. His Barry Allen persona is simply interesting and the comic did a good job of showing that off.

The artwork is also pretty solid here. It may not be the most colorful I’ve seen, but it holds its own pretty well. I like the speed effects and there’s a lot of weight behind each hit. There was a good amount of effort put into the artwork for sure and it shows. It’s part of what makes this an easy read along with the quality writing. You’ll be drawn into the pages and ready for the next adventures to come.

Overall, This is a pretty solid collection of comics. The best issues are the ones where Flash is dealing with the Rogues and going undercover in the shady part of town. The Grodd stuff is less interesting but the comic does use him for a good cliffhanger. You can’t help but feel like Flash should wreck them all as soon as he wakes up so their gameplan should be to destroy him while he is still knocked out. If you haven’t checked this comic out yet then I’d recommend reading it. There are a lot of other plot lines going on that I haven’t even mentioned. While there are references to earlier comics you don’t really need to read them to get what is going on.