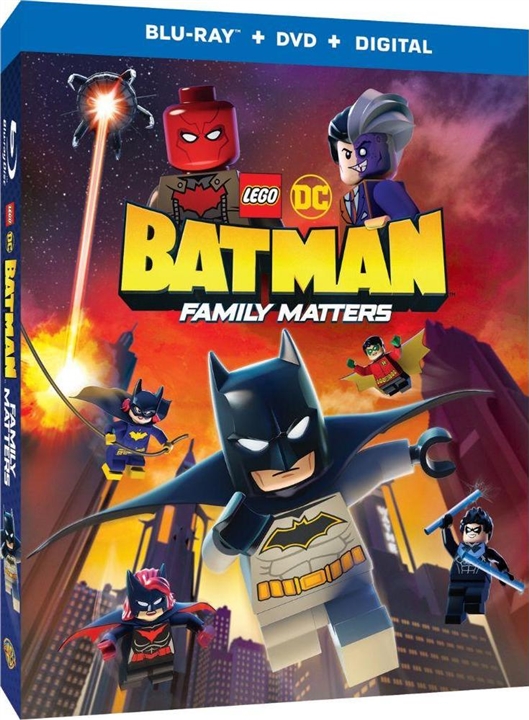 It’s time to look at one of the latest Lego adventures. DC has been particularly good at using this format and this movie is no exception. This time we’re back to focusing just on the Batman characters and it works out pretty well if you ask me. Batman steals the show and we get to adapt both the Red Hood and Omac sagas in one film. That’s pretty impressive.

The movie starts out with Batman really not liking the fact that he has to continue living as Bruce Wayne. It’s all just a big distraction from his true passion in life which is beating up enemies. It’s gotten to the point where Batman can’t even stay awake during a board meeting. Something’s got to give and he gets his chance when Wayne Enterprises develops the Brother Eye. In theory it can replace Bruce Wayne so Batman jumps on the idea and even decides to sell Wayne Enterprises entirely. Now he can be Batman 24/7. The only problem is that the city is as dangerous as ever. A mysterious figure is bumping off all of Batman’s allies one by one. If he doesn’t stop this guy soon then everyone is doomed. Additionally, Brother Eye may be deadlier than it appears to be. (Although it looks pretty deadly from the jump.)

One of the main reasons why this film works so well is because of how good Batman looks. He’s got that smug confidence that we’re all used to seeing at this point. Not only is Batman highly skilled but he knows it and it’s even gone to his head by this point. Only Alfred is really able to keep him in check. The others can just hope that Batman sees it their way. The voice actor has done a good job of becoming an iconic voice for the character as well. There doesn’t seem to be anything that Batman can’t do at this point. He beats Solomon Grundy with ease and always has a plan of action even if Brother Eye proves to be a formidable foe.

The rest of the Bat characters are also fun. Damian wants to prove himself as Robin but has to work pretty hard at this since Batman really doesn’t trust him yet. He does well enough when it counts and takes down a bunch of the robots with ease. Batwoman gets one of the larger roles from the allies though. She’s certainly got a lot of confidence and takes Killer Croc on with no hesitation. I like the concept of Batwoman since she’s more of a loner like Huntress. Batwoman doesn’t necessarily work under Batman since they usually have no affiliation. That being said, her skills do suffer a bit as a result since she doesn’t get that training. Here she has got that confidence that you always want to see in a hero.

Batgirl gets less to do as a result though. She holds a petty grudge against Nightwing for a good portion of the film. Her fight with Scarecrow was fun as she had to work her way through illusions and mirrors to get at him. The mind games definitely took their toll though which made Red Hood’s job pretty easy. Nightwing looks good and is the only one to not fall for the quick sucker hit. At least he gave Red Hood a good fight and that makes sense. From all of the Robins I do consider Dick Grayson to be the most skilled. After that I would put Jason Todd as number 2 and then Damian as 3. While I do think Tim Drake is a great character and a fun Robin, he’d have to round out the group almost by default. The Robins are just stacked when it comes to power.

Red Hood definitely looks really good here. He gets a lot of hype and seems to be the smartest character next to Batman. The film has no shortage of emotional moments like this plot line as well as the reason why Brother Eye is so sore. Red Hood’s identity may not be much of a secret and I don’t think it was supposed to be, but it’s still nice to have the reveal later on. It’s just a good arc in general whether it’s through a film or a Lego adventure. We didn’t even need the Omac subplot and the film would have still been great but it made for a solid climax.

It’s always good to round things out with some big action scenes and Family Matters didn’t forget about that part. I can’t really say that I had any issues with the film. As far as animation goes there isn’t really anything to say because it’s the same as always. Either you like the Lego style or you don’t. This film wouldn’t be changing your opinion one way or the other because it’s not trying anything different with that. I don’t think there is much you could try either. Legos will always look like Legos or it wouldn’t be a film in that style. That’s the way I see it at least.

A Lego film will usually live or die on the writing. If the writing is bad then the jokes won’t really land and the whole thing will fall flat. What the film is hoping for is that the jokes will be pretty funny and this one succeeds there. Right from the gate we get a lot of great lines. I wouldn’t even mind a whole film about Bruce Wayne just mocking everyone and trying to make it a whole film without people blowing his cover. Batman may not be as cautious when he’s Bruce Wayne like when he’s talking about his Batman job on the phone, but it goes hand in hand with his contempt for everyone. Batman doesn’t think it’s a security risk to be on the phone because nobody’s smart enough to stop him. The arrogance makes for a lot of comedic moments.

Overall, Family Matters is one of the stronger DC Lego specials. The dialogue is some of the best I’ve seen in the franchise and there’s a lot of action here. If you mentally switch the animation out this could legitimately be one of the big DC animated films. The fights are good and the pacing is tight. The film feels like it ends pretty quickly as a result. If you like Lego or at least don’t mind the format then I highly recommend checking this one out. You really can’t go wrong here and it’s always fun to see Batman getting his hype. Even if his scenes may not all be meant to be taken seriously they’re still hype.