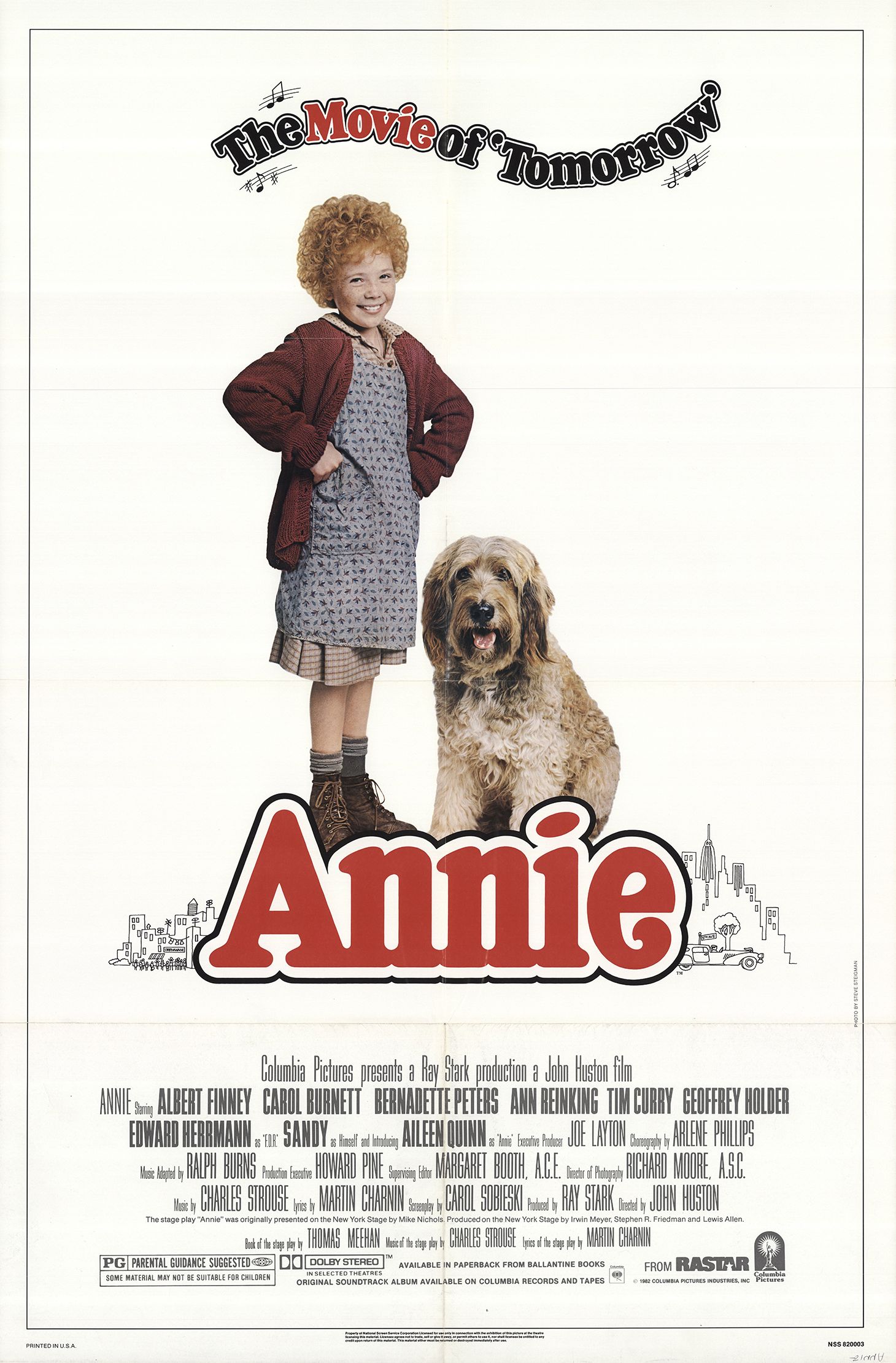 It’s time to look at a pretty popular musical from back in the day. Musicals can definitely be hit or miss depending on how good the songs are. Ironically the songs are usually way better in films that aren’t musicals and just happen to have a song or two. There are a lot of reasons for this, but a big one is that the songs are usually professionally done in the background as opposed to the characters actually singing on screen. The on screen songs just don’t end up having the same effect and pale in comparison to these big blockbuster songs. Annie’s songs aren’t bad for the most part but they won’t really stack up in the long run.

The movie starts by introducing us to an orphanage run by Agatha. She really doesn’t like kids, but needs money in this tough economy so she made the hard call to run the place. Annie tries to keep the kids moral up but it gets tougher with each passing day. What is there to look forward to when you’re in such a mean place? Well, Annie won’t have to deal with this for much longer because she was selected to spend a week with the rich Mr. Warbucks. Warbucks is so rich that even the President defers to him. Now Annie can learn what it’s like to live in wealth with her dog, but can she learn to enjoy this or will she continue to look back and forget the future?

The premise is one of those plots that can be fun to think about. Who wouldn’t want to spend a weekend being as rich as humanly possible? Money can’t buy happiness but it can help you lease it for a while. Even more so considering that Annie was an orphan at a pretty badly run orphanage so she has a lot of reason to be happy at this new place. That’s why she can seem rather ungrateful at times. Even after Warbucks has given her one of the best weekends ever she is still desperate to meet her parents and hops in the car of the first strangers who claim to be them. You can understand her wanting to meet her folks for closure, but just leaving with them like that? Doesn’t seem like the wisest course of action because you really don’t know if they’re good people or not. Whether they had reasons for leaving Annie or if they did it on a whim, it doesn’t change the fact that they never looked for her until a reward was placed.

Meanwhile Warbucks is definitely a lot of fun. He doesn’t let anything get in the way of his making money prior to Annie showing up. While he has a gruff exterior he ultimately does let Annie stay so the guy is pretty nice deep down. His romance plot with Grace is very cheesy though. For starters she works for him and workplace romances are always a landmine that you don’t want to go to. It would have been perfect if they were just good friends the whole time. So Warbucks’ character got watered down quite a bit by the end of the film, but he was still an engaging character on the whole.

Then we have Agatha who is one of the main antagonists here. She’s definitely a very mean character who is always messing with the orphans and somehow nobody has caught or fired her yet. She makes moves on any guy who shows up and somehow even seems to be succeeding with two of them. Her character is way too exaggerated and most of her scenes are pretty iffy. I think the film could have dialed down the her desperate romance angle a bit. She’s also rather mean to the dog, I never like how they used to lift the dog by the scruff of their neck, same with cats. There’s no way that’s comfortable for the animal. By the end you just aren’t able to buy into her redemption arc.

You’ve got two more villains in Rooster and Lily. They’re a little more sinister than Agatha as they don’t mind hurting the kids if it means they will get rich. They have a long song with the 3 of them where Lily keeps beating up Agatha mid-dance without Rooster realizing it so he’s not the brightest guy in the bunch. Agatha was also losing that match entirely so we know who the tougher character is. It’s almost a bit odd since Agatha seemed to be winning in their initial encounter but I suppose you can’t win them all. The villains weren’t bad. They served their purpose at least and gave us a little danger in the climax.

As for Grace, she’s probably the nicest character in the group. Without her Annie wouldn’t have had a chance at all. Grace got her in even if it meant using some blackmail and then she convinced Warbucks to let Annie stay. Grace really put in a lot of effort to make sure that everything worked out and was the unsung hero of the movie. You’d think that the other orphans would have been helpful but most of them were mean and petty throughout the film. Even when Annie was in trouble one of them didn’t want to hear about it and several of the others were ready to give up. Some friends right? Warbucks had some good assistants but none of them were around when Annie was really in danger.

Annie has a lot of fun little moments with her exploring the mansion and the film is at its best when things are going well there. I’d be up for a full movie of just having fun enjoying the rich life. There is so much you can do when you’ve got that much money and the film could have explored that angle. Throwing in the villains distracted from that part as there was far less time for such things. Sandy was a lot of fun though and I’m always up for a dog companion so long as he gets a happy ending. I’d like to see Hallmark do a modern version of this with a grown up who is selected to live in a castle for a week. It’s a plot that I’d say could be executed better than how this one went about it.

Overall, Annie is a decent musical that can be a bit too extreme at times. . Agatha’s character is a bit odd with how mean she is yet the kids keep messing with her. It’s likely done to keep the film from being too dark which I can appreciate. How much you enjoy the film will likely depend on how much you can tolerate Annie. Warbucks is a really fun character and in a sense you’re hoping he doesn’t crack under the pressure and stays as the suave rich guy that we all know. The film is largely predictable so you’re really just along for the ride as you hope the execution is good. You should be entertained all the way through which is the important thing.