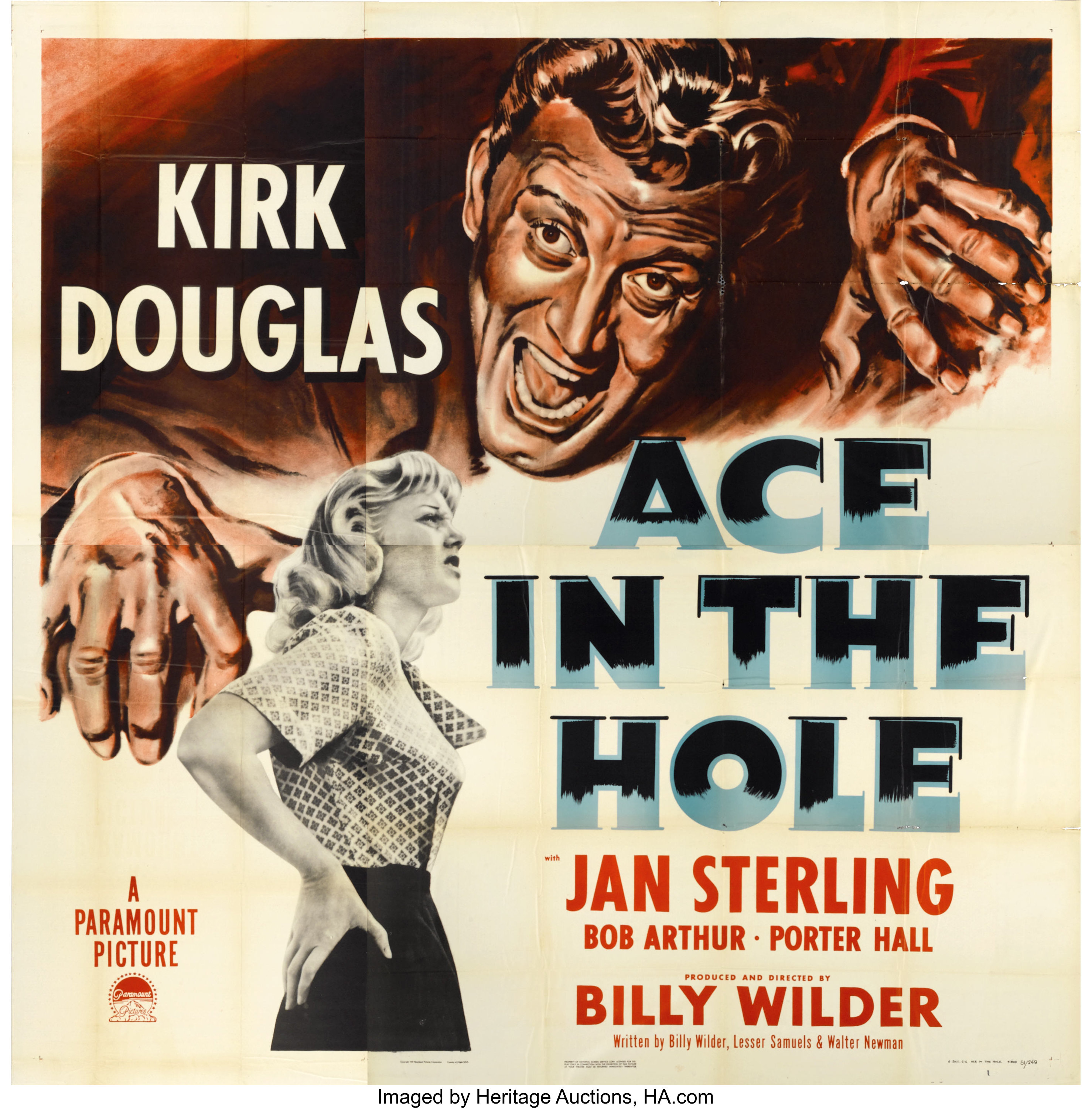 It’s time to look at a film about how trying to get a story at the expense of a life may end up ruining things for everyone. I mean it’s a pretty clear message but it seemed to be a surprise to Chuck who suddenly starts regretting this a bit. It’s hard to rummage up any sympathy points for Chuck because the whole thing is completely his fault. It’s not like it’s only partially his fault or he didn’t know any better. He knew exactly what he was doing the entire time and this results in a rather unfortunate ending. It’s an interesting film but not one I would check out again.

The movie starts out with Chuck heading to another newspaper. He was fired yet again and is now known for being fired from the most papers. He’s been creative with how badly he’s failed though as he has been fired for being drunk, stealing someone’s wife, making up stories, etc. Well this next paper decides to hire him anyway since they’re nice like that. His first big assignment outside is going to be about a snake fight. Chuck doesn’t really care about this though and is glad to get sidetracked by a local tragedy. Leo has been trapped underground after wandering inside a cavern despite being told it was dangerous. Chuck realizes this is his big break. If he can stop anyone from saving Leo he can really exploit this event for big money. That’s exactly what he intends to do, but every day he stretches this out, Leo’s chances of recovery continue to dwindle.

The film definitely gives Chuck a whole lot of power here. Everyone listens to him unquestionably and he gets the upper hand on everyone. Even the guys called in to rescue Leo end up listening to Chuck and using the wrong method of recovery. Chuck does have a lot of confidence and tends to barrel right through everyone so I suppose the others didn’t want to mess with him. Part of why the plot works is because you have just enough powerful people in the wrong places. The Sheriff is corrupt and Leo’s wife actually likes Chuck and wants Leo dead anyway. Leo has really just got the worst luck here which is definitely pretty unfortunate for him. Anything that could go wrong did go wrong. I still find it a bit iffy that nobody pursued this further to try and free him before now. Just waiting on Chuck to do everything was pretty iffy. Unfortunately the only one who cared about Leo was his father who was quite old and wasn’t able to help much here.

This film’s main weakpoint is definitely the romance part. Leo’s wife liking Chuck feels like an extra plot point we don’t need. For the most part he shuts her down as he makes it clear that the story is the most important factor in his life, even more than romance for him. Chuck’s certainly dedicated. It’s particularly tragic for Leo since he doesn’t know any of this and thinks that his wife is readily awaiting his return. As the film goes on he never becomes wise to this and in a way I guess that would have been an extra blow. It makes Chuck look particularly bad with how he’s manipulating the guy though. Chuck’s clearly the villain here so definitely don’t get that sideways.

The writing is pretty solid though. There’s a lot of solid back and forth between all of the characters. Plans are made and every character’s got an angle. Chuck’s got everything sewn up so tight even the big papers start to beg him to return. He’s really got everything at this point which is really impressive in itself. The movie’s pacing is also pretty good. The opening may seem a little slow if you want to get to the main plot but I thought it did a pretty good job of setting Chuck up. He’s pretty straightforward on the fact that he’ll do anything for a story. He even convinces the youngest member of the group to go with him, thereby dooming both of them.

The ending’s definitely a downer though. I’d have preferred a different ending where Chuck still gets exposed but things go a bit better for Leo. The way his plot ends is particularly tragic since he thought right up til the end that he had a shot. He had absolutely no idea what was going on right outside. He was really just in the wrong place at the wrong time. The film never gives us a great explanation on why he was defying orders and going into caverns he wasn’t supposed to be in though. His confidence ultimately ended up costing him big time.

Overall, Ace in the Hole shows that while having 1 ace is good, two is better. Chuck ultimately needed a good backup plan and then maybe things wouldn’t have turned out so badly for him. He ultimately didn’t think things through well enough at all and it cost him when it counted. I was glad that the smaller newspaper actually tried to get involved at the end when the boss showed up and questioned how Chuck had fallen so low. To an extent this is on him for letting Chuck join but at the same time he couldn’t have known what was going on. All things considered I think he did a good job and he was an upstanding guy. The problem is that not everyone is in the biz for the right reasons and that ultimately ended up hurting them all.