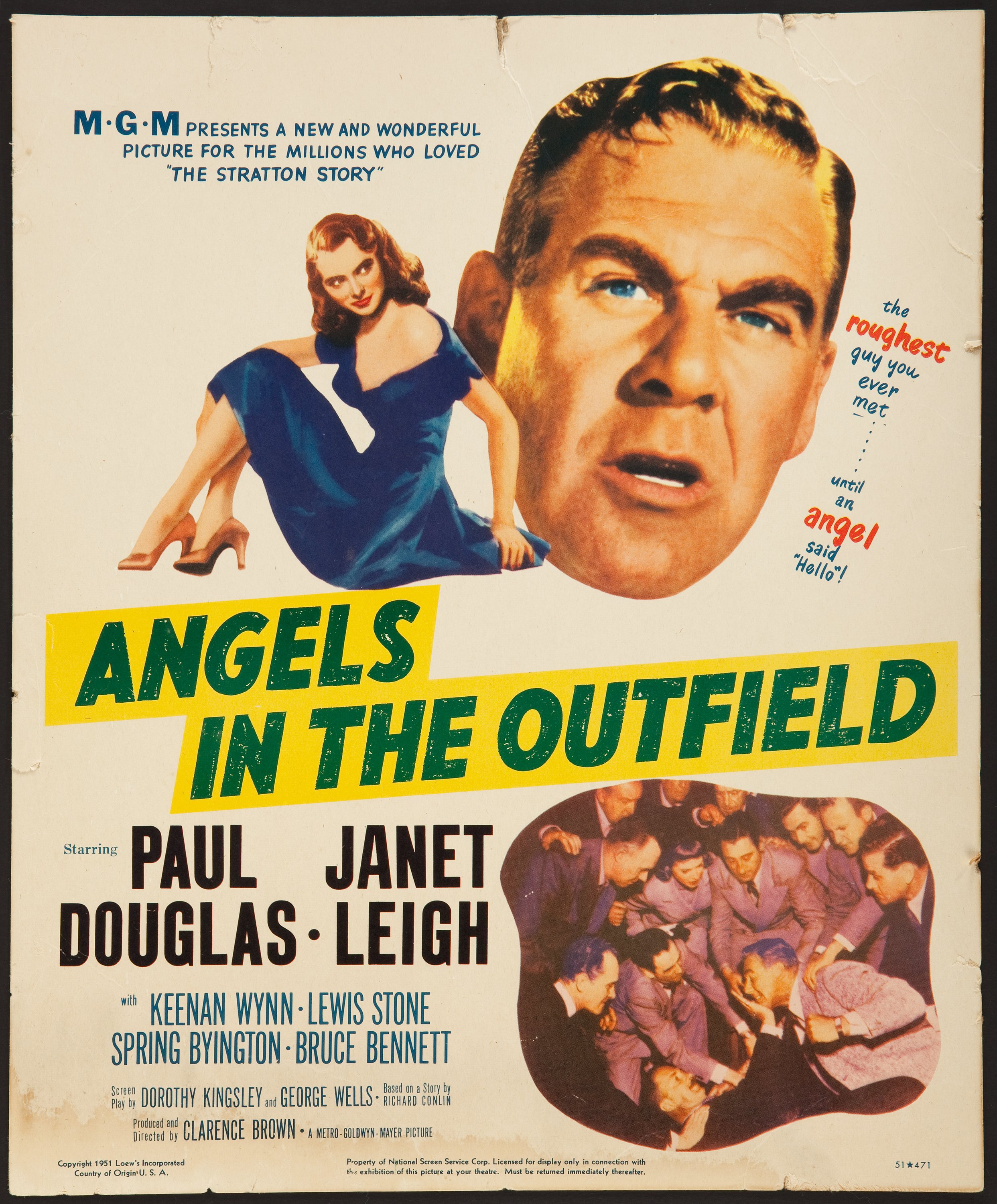 It’s time to look at a Baseball film from a long time ago. This one’s definitely a pretty solid film. It’s always nice to have a sports flick and in this one we get some quality character development and good writing. It’s a very pleasant film throughout. I’ve never been the biggest fan of Baseball as I find the game to move a little too slowly. That said, in film format it tends to work out pretty well because you’re cutting right to the action every time.

The movie starts with the Guffy’s Pirates losing yet another game. They’ve now dropped 10 games in a row with no end in sight. They’re dead last in the conference. Guffy’s upset but he still wants to go and enjoy his dinner as usual. He beats people up and has caused such a ruckus that a reporter named Jennifer has written a story on him. Guffy then receives a message from an Angel who has been watching him. Guffy needs to clean up his act and in exchange the Angel will start delivering his team some free wins. Guffy agrees to do this but it’s going to be difficult to break his old habits so easily. Additionally there is a little girl named Bridget who seems to be able to see the Angels somehow. This has started to cause quite a stir.

Guffy’s your classic gruff main character who definitely seems to enjoy picking fights with just about everyone. He never backs down and whenever someone has a problem with him Guffy just goes and beats the guy up. Of course this is all catching up to him though. People used to like hanging out with him and now he has no friends. Guffy just didn’t care so this kept on happening. Now he has a reason to care and he’s started to be nicer, but people aren’t so quick to forgive. It’s pretty realistic. How likely are you to be friends with someone again after they’ve been badmouthing you for so long? it’s definitely not very likely if you think about it. Still, he does really try to change which is the important thing. He’s certainly a much better character by the end than when he started morally. Guffy makes for an entertaining character either way though.

As for Bridget, as far as kids go I wouldn’t say she was bad. I tend to still not be a big fan of them in films but she was helpful and never got in the way. She would see the Angels and called it like she saw it. Bridget was also pretty quick to defend Guffy which was nice. She never got tricked by the media or anything like that. Finally you have Jennifer who is a fun heroine even if she seems a bit oblivious at times. She just walked right into Guffy’s place and made herself right at home. I suppose as a reporter you’ve got to have that level of confidence though so she did good. At first I actually thought she was going to be the main character of the film. Her role is pretty sizable and she seems like a nice person. She was a great help to Guffy in getting his life back on track.

Meanwhile the Angels certainly helped quite a lot as well. Their assistance in winning all those ballgames was invaluable and the Angel certainly helped Guffy to understand that he needed to change things around as well. The movie did a good job with the writing and the humor here. There are a lot of clever little gags in the script and the jokes work quite well. If someone got the better of a character with a joke you could expect another character to fire back later on. There were a lot of callbacks and such. As I mentioned, the film is just a lot of fun the whole time. It has a nice sense of humor and tight pacing.

At times the film may not be super realistic like with the Baseball association taking Guffy to court though. You really think they would have this much drama right before the World Series? I don’t see them stopping that game for just about anything. Particularly something like this which isn’t even a crime. Even if Guffy had finally cracked, that’s something that would be looked at during the off season. That’s why I liked how the NY teams took it as they were so confident they didn’t care if Angels were helping the Pirates. At the end of the day they were still ready to square off.

I enjoyed the court scene quite a lot near the end of the film. Even if as I mentioned, it’s hard to see the court happening, it was fun to see the 3 pastor figures they invited wreck everyone else. They did point out (in a polite way) that it’s rather crazy to claim to believe in the Bible but to not believe in Angels. I know there are a lot of factions out there but it’s like how I was reading that many don’t believe that the story of Noah is real. That’s something that could warrant its own article but you can’t just pick bits and pieces of it to be accurate. Either you believe in the whole package or none of it. You can’t go halfway on something like this. After setting the judge straight and the Angel also appearing a bit, that concluded the scene but it was a lot of fun. I was a little surprised that Guffy got in one more punch but I suppose he just couldn’t help it. Fortunately the Angels had mercy on him because things could have gotten messy otherwise.

Overall, Angels in the Outfield is a very pleasant film. It’s pretty down to Earth and only focuses on a few characters so we could really see their character development. Quite a lot happens during the film and it’s never dull. While the Baseball players themselves don’t get the largest role here, I do like how one of them stuck up for Guffy when the others were calling him crazy. Additionally I was glad that the old pitcher got to have one last good game. It all makes for a pretty emotional film. If you haven’t seen this film yet then I’d recommend checking it out. It’s aged very well over the years.