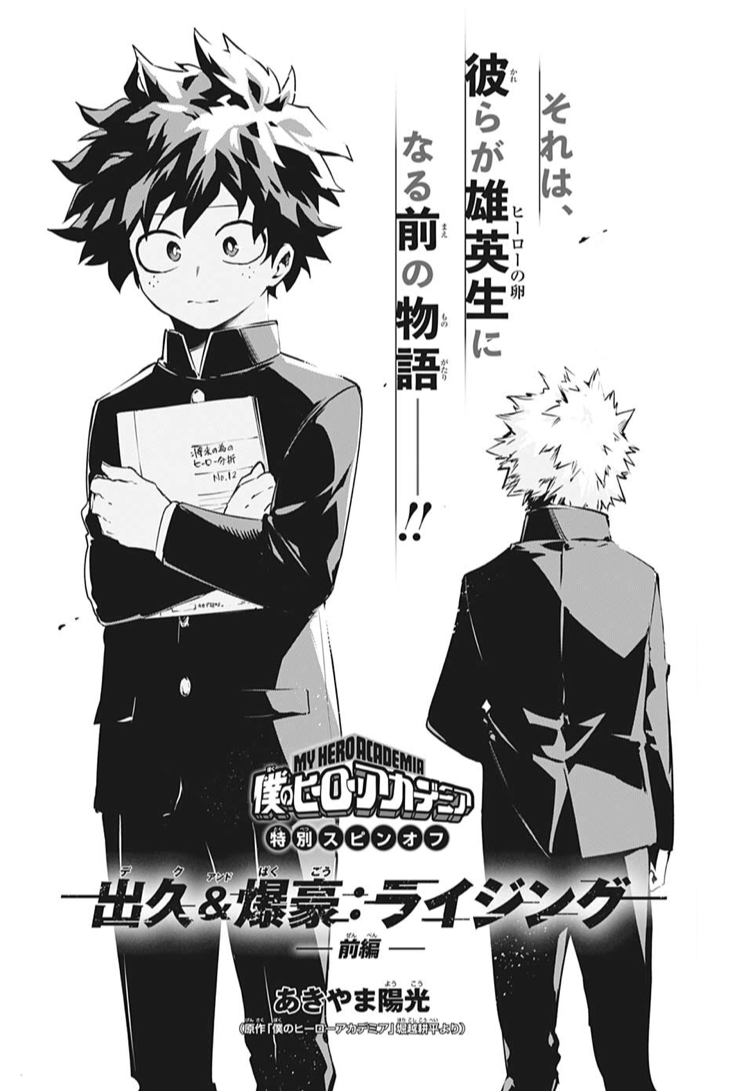 It’s time to take a look at a quick manga prequel to the recent My Hero Academia movie. It’s two chapters long and each one’s about 15 pages so it’s like 1 monthly chapter. It’s a fun little story about Deku & Bakugo going after their first ever villain. It underscores why you should be able to use your powers if you need too. The series isn’t totally explicit on how this works but I assume you are allowed to use your abilities in self defense. If that’s the case then we’re good although I am glad to see Bakugo just charge in anyway.

The basic premise is that Bakugo and the bullies are walking around town and having a good time. Deku shows up reading one of his superhero magazines so they pick on him for a bit. Bakugo is surprisingly the nicest one of the group as he gives Deku the magazine back. That’s when a cloud villain shows up and tries to flee the scene. Bakugo realizes that this is a good chance for him to finally be a hero and get into UA so he gives chase. Deku is worried about Bakugo because he has figured out that there is more to the villain than the cloud abilities. The only trouble is, how can he gives Bakugo a heads up about this?

Since this is a prequel and we know that the two still don’t get along at the start of the series this one naturally ends with the rift continuing to grow. Bakugo is pretty upset that Deku was able to figure things out so quickly while Deku is impressed that Bakugo was ultimately able to figure it out as well. It’s a fun dynamic between them and one that has been solid since the start of the show. You can definitely point out that their dynamic isn’t nearly as friendly or healthy as other rivals but the sheet animosity from Bakugo to Deku makes it pretty unique.

As far as one shot stories go this one was also pretty good. We got a little fight scene and the art was pretty solid. The plot twist about the guy’s powers was pretty neat although I do feel like they should have figured it out a little sooner. The sheer difference in element is pretty big so it’s something that you should be able to determine both visually or physically. That’s just how it goes I though I suppose. They were still kids when this happened. We also got to see a pro show up which was pretty neat. We don’t usually get to see a lot of the more obscure pros engage in a fight so when that happens it’s pretty neat.

This one incorporates the villains from the movie for a quick page at the end but this definitely isn’t their story. It’s really about connecting more details from Deku and Bakugo’s past. It accomplishes this goal rather well. The artist does a good job of making this feel like it could have been a chapter from the main series and the writing is on point. You’ll definitely read through this adventure in a breeze.

Overall, Deku & Bakugo Rising is definitely worth checking out. If you’re able to then you should read it before watching the movie. It’s always nice to have a little more context on the manga. Hopefully Viz puts this story at the back of an upcoming My Hero volume or something. I always think it’s a shame to lose these stories to the remnants of time. Every one shot should get put into physical form at some point. I’m definitely up for more My Hero Stories. I’ll be starting the My Hero Team Ups soon so that’ll be a good way to get some more My Hero action. There’s certainly a lot of different team combinations the series can try out.