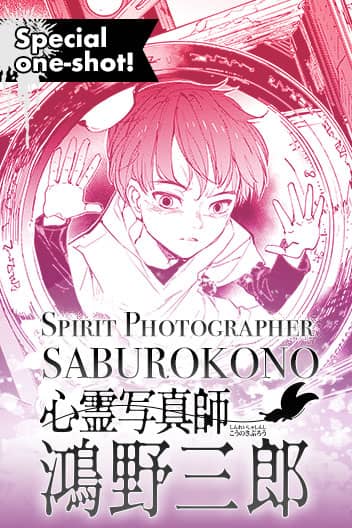 It’s time to look at a one shot that recently came out from the Promised Neverland author. In theory if it does well enough then this will get picked up for a whole series. I can already see the kind of vibe they’re going for so this would be something like Neuro or Hell Girl. Based on how the first chapter goes I’m sure we’ll have quite a few tragedies occurring here on the regular before we transition into the more antagonistic spirits. I can’t say that it grabbed me though. This isn’t a series I’d be particularly interested in but due to the anthology format it is going for some volumes would likely be better than others.

The story here is about a boy named Sota who has been rather depressed as of late. His next door neighbors are always moving out every few months because of a ghost that supposedly resides there. One day a suspicious guy named Saburo shows up while Sota’s mother is out. He says he is a photographer and forces Sota to accompany him to the haunted apartment. He then has Sota give him the full history of the place which is basically that a lady used to live there until she committed suicide. Sota asks why he’s needed anyway and that’s when the ghost shows up. It is the lady and for some reason she is after Sota.

This is just a one shot so I feel like there’s no such things as spoilers. Either you read it or you didn’t. So if you haven’t then skip the next few paragraphs or just go and read it before reading the review. Not much point in reviewing a one shot but skipping the plot right? So here’s the plot twist. Sota tried committing suicide so the lady stopped him but ended up slipping due to the rain and fell out of her apartment. Sota then kept quiet and let everyone believe she simply tripped. The ghost was just the lady saying she didn’t blame him so Saburo took a picture and she moved on. See, Saburo is a spirit photographer so he takes pictures of the spirits when they get to finish their business. He makes it a point to say that he’s not an exorcist so he doesn’t handle evil spirits or anything like that. I think this already implies that they will appear soon. I have a few problems with the story though.

The first is rather superficial but I feel like Saburo will need some work before he becomes the main character here. Granted, if this is like Hell Girl then he will show up in every story but won’t really be the main character. Still, the dynamic doesn’t work as well. He is portrayed as very shady and he did completely force the kid to go to the haunted hallway under the implied threat of violence. This is going to be our main character? The guy’s design and actions scream villain. You can certainly have a character like this to subvert expectations but I really don’t see him working well as the lead. Certainly he has less charisma than almost any other lead I’ve seen. Seriously, read chapter 1 of almost any other manga and I bet they’re a better character. So he needs work.

Next, the whole anthology string of tragedies isn’t going to work for me either. So we’re already starting with a indirect murder/suicide attempt? The whole thing’s pretty tragic for the lady who was just trying to help out. It doesn’t do wonders for Sota. He’s just a kid of course and I expect he would never appear again but this just isn’t a strong first chapter. Aside from being tragic there just isn’t much to this. There’s no big incentive to keep on watching because the premise itself just isn’t very interesting. What helps Hell Girl out a bit is that she acts as the punisher and sees that vengeance is carried out. Now, that’s a series that I doubt would get high marks if I reviewed it because of how dark things get, but at least it’s an interesting angle. Then Neuro quickly went full on action which was exciting at least.

There’s no way to guess how this one would progress so I can only go off the pilot. Suffice it to say, this is not a pilot that would really get me interested. There’s not a whole lot more to say beyond that. I wouldn’t say the art is particularly good but it’s basically the same as the Promised Neverland so if you liked the art there then you should be good here. It works well enough for the horror atmosphere I suppose but it doesn’t flow as smoothly as a lot of the other titles on the block. I imagine the author will continue to improve as the series goes on though.

Overall, We’ll see if this ends up becoming a series. I’m not really pulling for it, but if it happens it happens. It’s not like it’ll be a bad thing if it does, but I’m hoping for more action type titles. A lot of the other recent jump titles look more interesting so I’d be hoping that those continue to go strongly. Pilots usually end up being quite different than the actual series though so we’ll see how it’s restructured. My personal recommendation to the author would be to change the main character’s design and for the camera stories either go for more of a Yotsuba type of adventure with the spirits or have Saburo take a more active role in the adventures rather than scaring people for kicks. If you start out with smaller cases first that would make sense. Due to the nature of unfinished business though, I imagine a lot of the would turn out rather dark like this.