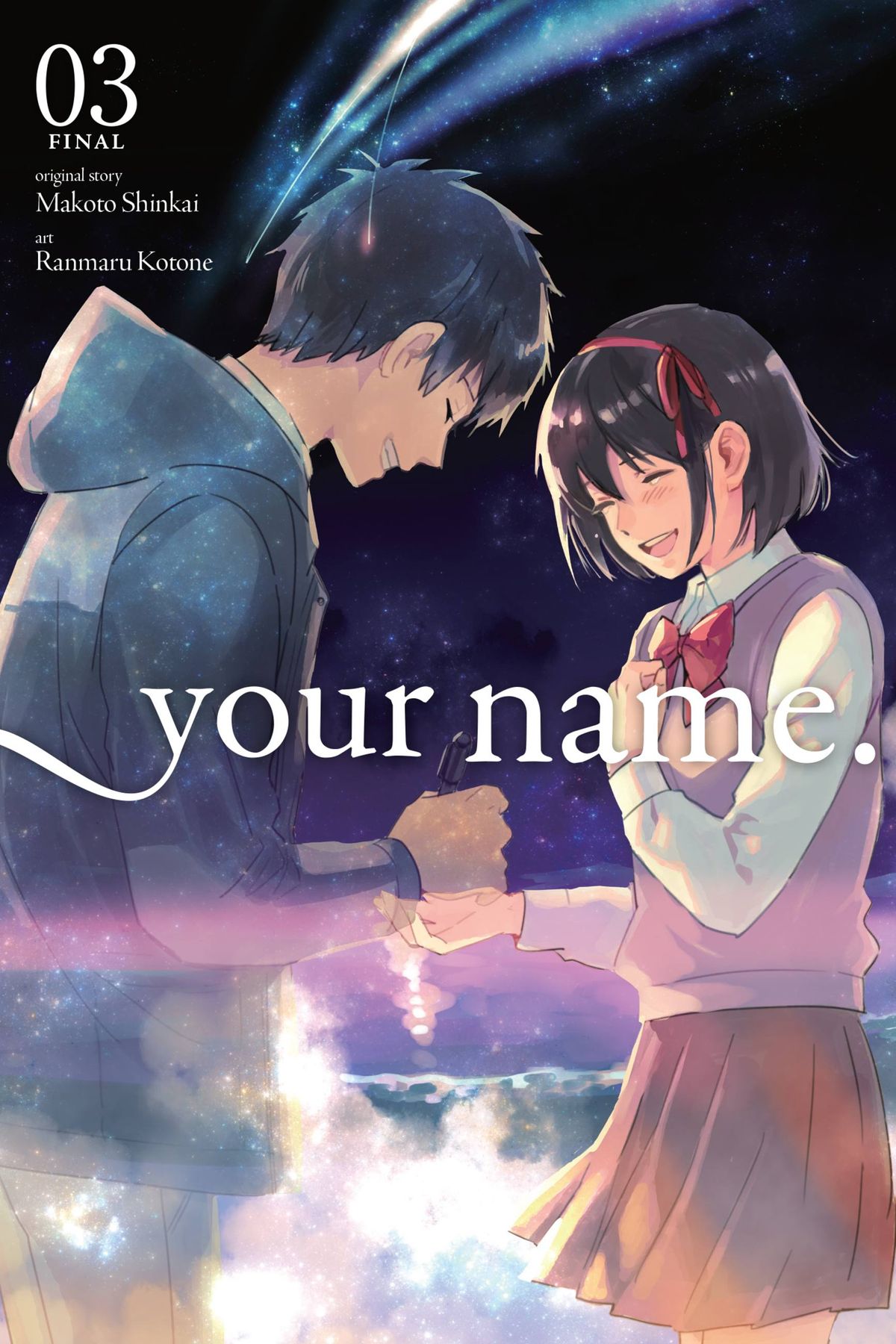 It’s time to take a look at the manga version of a film I watched a long while ago. It’s definitely a very straight adaption so if you liked the movie then you would definitely like the manga and vice versa. If you haven’t actually checked this one out in any form before then I’m confident you will still like it. The story here is pretty good and I always like the body swapping plot. Of course you have to handle it with care but if done right then it opens up a lot of possibilties of what you can do. The premise here is also pretty original in how the two main characters switch bodies every few days as opposed to it being permanent for a while.

The manga starts with a teenage girl named Mitsuha remarking that her small town is rather boring. She wishes she were a guy in a big Tokyo city where more interesting things happen. One day she wakes up as a guy and has one of the best days of her life. She figures it was a dream but then Mitsuha starts to notice signs that this wasn’t. Writing in her notebook and people commenting that she was odd the other day. She also has no memory of the days in which she “acted off”. We then meet the other main character named Taki and his situation is really the same as hers. He wakes up one day as a girl and then this continues to happen. After some experimenting they find out that they exchange bodies every 2 days and this goes on for weeks. They try and give each other signs so they don’t mess up each other’s life but something’s bound to go wrong. Will they ever discover why this is happening?

A lot of the fun naturally comes from seeing the characters operate outside of their element. Who handles the other situation better? Well, it’s hard to say since both of them improve the life of the other but I’d have to say that Mitsuha ends up being the MVP here. Let’s look at the pros and cons of each. Mitsuha managed to score Taki a date, she made his father the best chopped potatoes ever, improved Taki’s job performance, and even got people into thinking he was a nice guy. The main con is that she had a bad habit of spending all of his money. While that may sound dismissive, it is a pretty big deal. He ends up being fine with it but imagine if he was saving up for something. That would have been pretty disappointing for sure.

Then you have Taki. Well, for the positives he got the bullies to stop messing with Mitsuha and made her a popular star among all of the sport teams. He even got a bunch of people asking her out. On the other hand, he doesn’t even try to act like a normal girl and puts Mitsuha in a bunch of embarrassing situations. Additionally, he definitely oversteps his bounds quite a bit by taking advantage of the fact that he’s a girl. While it’s played off as a comedic subplot that he is always acting rather pervy, it really makes you lose respect for the guy. They’re supposed to be friends and yet he keeps pulling this off and even at the end of the series in an emotional moment he lies to her face about this. Taki’s just not a great guy no matter how much the film tries to play him off as a good guy. Nah, I’m not buying it.

I also have to dock some more points for Taki not bothering to write his name down so she would remember him. The whole plan was to write their names in each other’s hands and he broke that on a whim. Yeah, Taki can be pretty selfish and a lot more petty than Mitsuha. In case you haven’t guessed, I thought she was the much better character. She really did her best to improve his life and I also thought she was ore sympathetic. The manga goes out of its way to show that she’s really not happy in her town while Taki was having a pretty fun time in his. Even if they hadn’t switched bodies things were going pretty well for him when you think about it.

The ending’s not very good but of course I can’t go into details on this. All I’ll say is that it’s just not very satisfying. Even if things turn out well in the long run, it’ll never really be the same without the history behind it. The ending could have been far worse though like if Your Name had opted to go for the whole destiny can’t be changed thing. I never bought into that so it always makes for a pretty bad ending. You just can’t let that happen and fortunately this series did not.

I’d say part of why the adventure works is because it’s always easy to think of what it would be like to experience a day in someone else’s life. New scenery, new experiences, etc. Of course a whole month is a bit much though, halfway through you may be wishing to go back to your own life. The risk of having someone else in your body during all that time would add an extra layer of stress as well. Who knows how your social reputation may be by the end of that right? There’s no going back depending on how some of the actions go down. It’s definitely something you’d probably say no to in real life although if it’s a magic comet then that’s another story.

The technology being wiped towards the end felt like a bit much though. The characters were pretty rational in how they planned for things to work out. Usually I’d critique the characters for not thinking of something but they actually did which is the worst part. Everything vanishing was just messed up. Of course this is all fantasy but that part didn’t really make sense. I suppose we needed that to be a part of the drama of course. A lot of these choices just come down to me writing things a little differently if I was directing the story but it’s still a solid adventure through and through. Take away some of Taki’s dicier moments and this is a pretty great story. We need more solid body swapping titles like this. 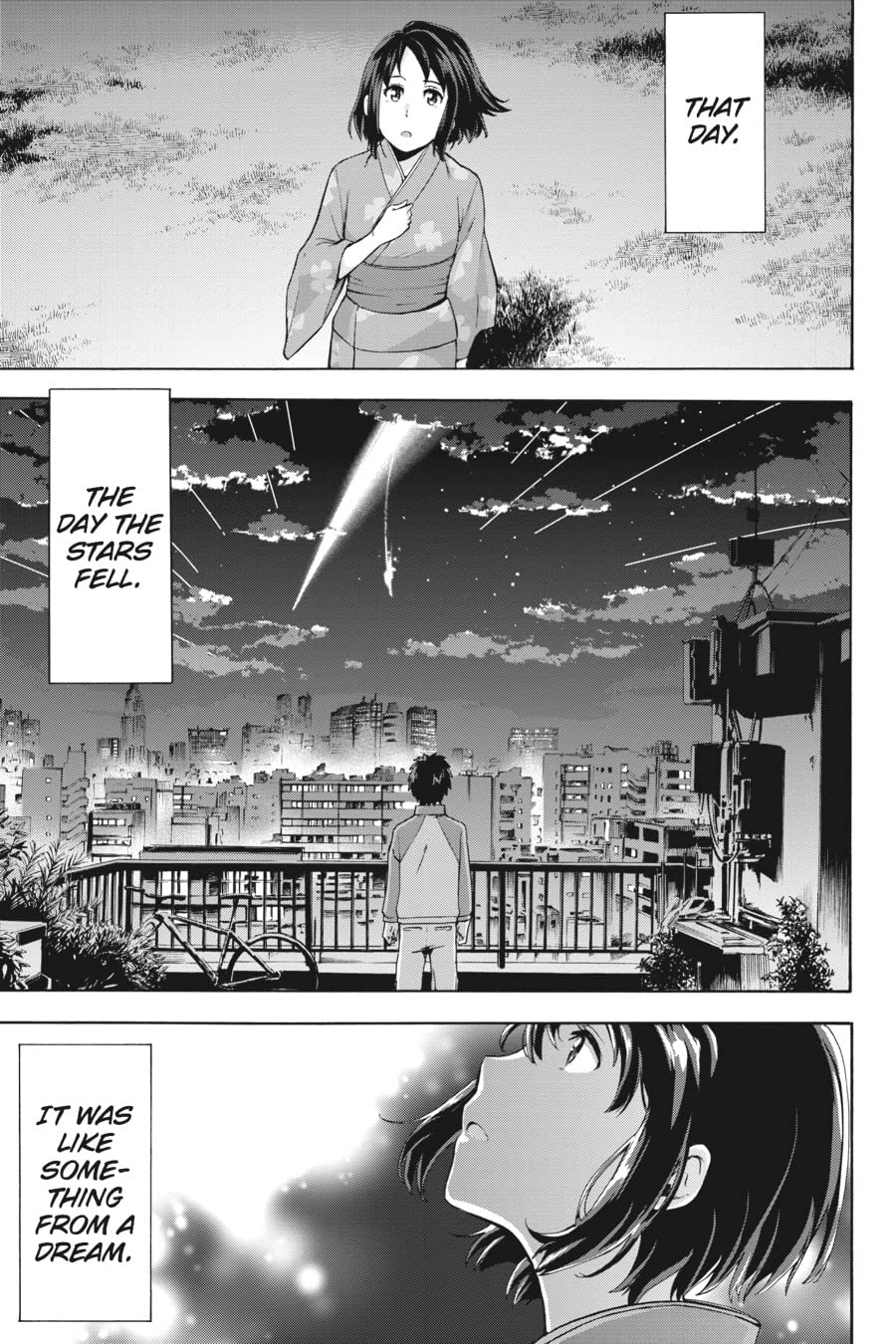 Overall, Your Name is a pretty fun adventure. I’m still not a big fan of the ending though and the first part of the adventure is the best bit. It’s still hard to believe that even though the whole premise of the adventure is the body swapping, it only really happens a lot during the first volume or two. Then the big plot starts and this quickly begins to fade as Taki tries to uncover the truth behind this. I think they could have focused more on the first bit and also switched up the ending, but either way this is a solid adventure. The character cast is small but pretty focused. If you haven’t seen this yet then you should check it out. Since the experience is about the same you can check out either the manga or the movie. As they say, you never get the first experience back so choose carefully on which version will be more emotional for you.

2 thoughts on “Your Name Review”