It’s time to look at a quick anime that came out a while back. Season 2 shouldn’t be far after though and with the manga being over they can really fast blast now. At 12 episodes this is a pretty quick anime and your classic seasonal type show. It makes for a nice quick watch with a compact cast. The show was pretty unique in its premise so it made some waves. While I wasn’t a big fan of the manga as the concept grew darker and darker in its execution, the beginning always starts off pretty ominous. I think season 1 was a pretty solid adaption with definitely a lot of notable moments within.

The show starts by introducing us to Emma and her friends at school. They live in an orphanage and don’t know anything about their parents. They have numbers tattooed on them but beyond that it’s a very ordinary home where they live perfect lives. The kids all eventually find foster parents before they enter their real teen years which is good too. One day Emma decides to follow one of the kids who is sent out along with Norman and then they find out the truth. They actually live on a human farm where the kids are sent off to be eaten by demons. As the oldest kids with the highest test scores, Emma, Norman, and Ray will be the next ones to be shipped out. Do they tell the rest of the kids, bump off Isabella, or try to escape? There are a lot of ideas but not a lot of time. The heroes will also have to try and keep a straight face in the meantime but will they really be able to do that?

This is definitely a horror anime. The kids know that their odds aren’t particularly good and finding out that you were born to be shipped off isn’t a great feeling either. There’s a lot of things that the kids just don’t know either. What exactly is this planet and how does it work? They can’t trust anything they learned at the school and it seems like escape will be nearly impossible as well. There are a lot of natural defenses to take into account as well and since they are just kids it’s not like they could fight off the demons either. They don’t have any true weapons either and there is a tracker built into each of the kids so the villains know where they are at all times. The deck is stacked against them so the show is mainly about their planning a way out of this.

The season adapts the complete arc and doesn’t really even end with a cliffhanger so it handles all of this rather directly. It feels like a pretty complete story even if there obviously has to be a season 2. The cast will definitely grow in the next season so you can eagerly await that. The main cast we have here is pretty solid though. First you’ve got Emma who is extremely determined and wants to save everyone. Her view is that they can’t escape unless everyone is safe. I feel like they toned down how crazy she can be a bit in the anime as the manga did a terrific job with her close ups. Still, she is still the same character here and does everything she can to make the plans succeed. Emma isn’t afraid of death or pain and will go to drastic measures to make sure things work out. As she is here, Emma’s definitely a solid character.

Then you have Norman who is easily the smartest kid in the class. He has a bit of a rivalry with Ray on this but I think it’s fair to say that Norman is always a step ahead. He finds out quite a lot during the season. He may not always beat Isabella in wits but always comes close so it’s neck and neck. I like Norman’s calm demeanor here even if he’s always got something up his sleeve. He’s also determined to make Emma right so his plans are built with that in mind. By throwing his plans on top of hers he makes them sound even better.

Then you’ve got Ray who is not quite as much of a “Gotta save them all” person as Emma. He looks at things scientifically on what gives him the greatest chance of escape. If he has to sacrifice others to do it then so be it. Naturally this is a very ruthless way of looking at things but you do have to look at the situation from his point of view. Emma wants to bring along kids who are only 2-3 years old with them on a journey through the forest that could last for months and they will be on the run from demons. While anime can help kids be a lot tougher than in the real world, there is only so much you can do with a 2 year old. Can you picture such a kid making this kind of journey? So Ray’s right in that sense that taking everyone would be pretty crazy. 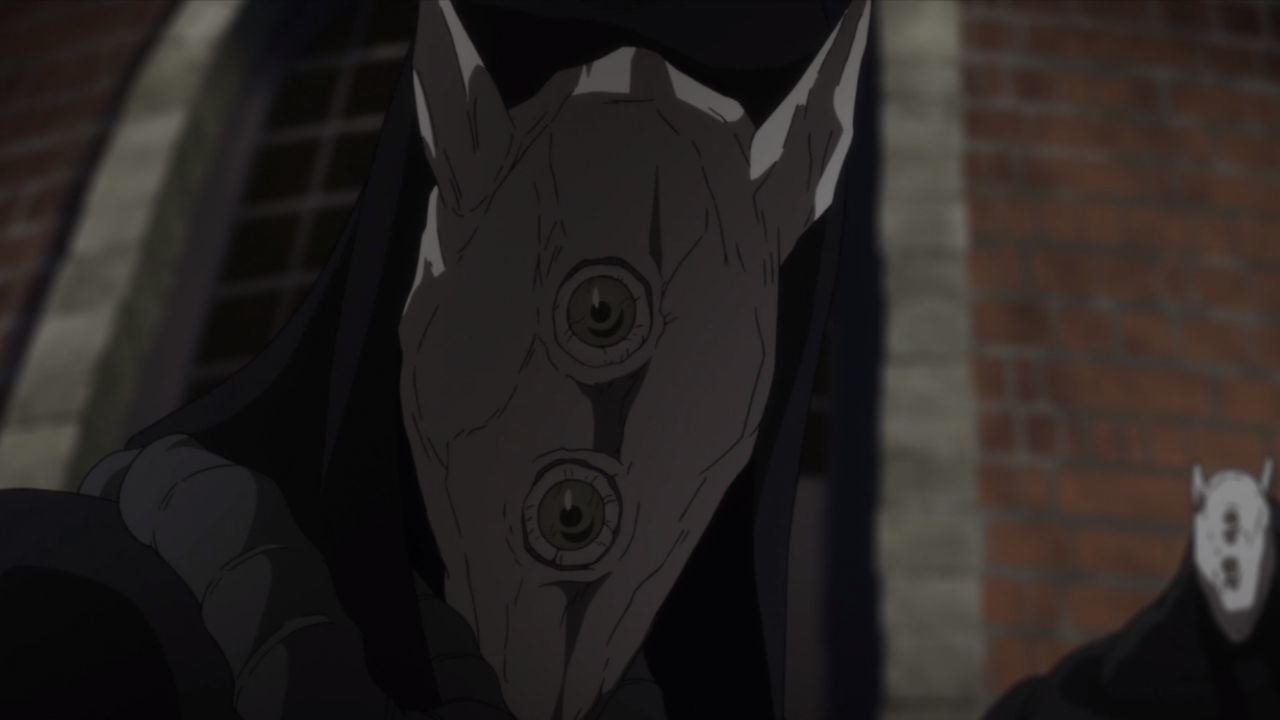 In a way the best thing to do would be to bump off Isabella but at most that would only buy them some time. She has to make regular communications to the demons so if she suddenly stops then that will really raise some red flags on their side. That’s why escape is still the best bet but they’ll need a terrific plan to bring everyone together. As planning is one of the core focuses of the show you can rest assured that the plan is sound. A lot of thought goes into all of this and it ends up being pretty satisfying. If you think about it hard enough of course there are many ways Isabella should have been able to stop the kids. At the end of the day a big part as to why the kids get away with so much is her overconfidence. She thought she had more power than what she really did and also underestimated the kids quite a bit. That can definitely be a fatal mistake.

Isabella is still a good villain though. While she may have made some mistakes here, she’s had a long track record of doing well in the meantime. You can’t say that she didn’t do a great job when she’s maintained the place for so many years. She also has an interesting origin story showing the lack of choices you have in this society. Ultimately you end up being another one of the villains or you die out. There aren’t exactly a lot of rebel fighters out there. She’s still a villain as a true hero would have fought despite all of that though. Sister Krone is in a similar spot as she had to go through the same trials to get this far. After a point the characters just stopped worrying about others and started thinking about themselves. Krone really wants a win here so she can be back in control.

There are two other kids who get a main role in the form of Don and Gilda but they aren’t that great. I feel like they’re just here to get in trouble. There’s one scene where they decide to break into Isabella’s room just to stick it to Emma and friends. It ends up working out but that was such a petty thing to do and it could have literally gotten everyone murdered. Gilda also tends to panic quite a bit. These guys feel a bit out of their league next to the main characters. In some ways it’s not their fault since the main 3 happen to be super geniuses. Don and Gilda are technically still above average in intelligence but in this fight that’s barely even a consolation at the moment.

A lot of the fun in the show is thinking about the various arguments the kids make and who you agree with. There’s also a traitor subplot throughout the show that’s pretty interesting to follow. With all of the dynamics going on in the show there is always a lot of story to follow. Now as for who is right. Emma is naturally right morally since leaving anyone to die is a sacrifice. As it is, kids have been getting sacrificed left and right but you can’t change the past so you may as well change the future. That said, she doesn’t really have a concrete plan to do so. In that case taking Isabella out makes the most sense. In terms of probabilities Ray’s plan makes the most sense. The 3 of them leaving on their own would work pretty well. Then in theory you’ve still got about a year or two before you need to go back and save the rest. Of course sometimes a shipment leaves early so it’s a complete gamble either way. If your test scores are low you get shipped out a lot sooner as it is. If you had someone to protect then that would give some strength to leaving people behind but that isn’t the case so you do need to bring everyone. Better to all die together than 2 surviving instead of most right?

The animation is good. I wouldn’t say it’s anything great, but for a show like this you don’t need anything fancy. As long as the animation is solid you can still get across the horror vibes. The show likes its quick 3D looks as well which are fun enough. The whole thing feels very standard and since this is a pretty modern show that means it still holds up rather well. The real test will be once we get more fight scenes in a future season. Then we’ll see how the animators handle that. As for the soundtrack, I’d say that one’s pretty good. I like the opening song and the tunes during the episodes are suitably ominous. You’re not going to hear a lot of super happy tracks or anything like that of course. The soundtrack fits the tone which is crucial. 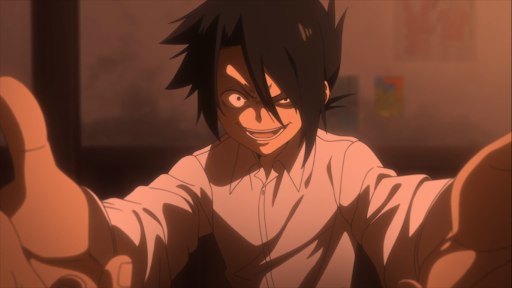 Overall, The Promised Neverland is definitely a pretty unique show. As far as the various dystopia futures go, this has got to be one of the darkest. There is really no backup for the heroes and not a lot of hope either. Still, they’ve made progress so in season 2 we’ll see how they use that. If you’re up for a dark thriller then this will be up your alley. It never gets violent or anything like that, it’s just dark because of how the kids are being eaten off screen and all. The show doesn’t beat you over the head with this fortunately so it doesn’t turn gritty. It’s just the premise of the show and Neverland runs with it. If you managed to watch the show without knowing this beforehand then the first episode is especially powerful although odds are that you’ll already know the twist before that happens. Usually even the promos spoil that part since it happens so early. The show builds up the tension through the atmosphere as opposed to crazy shock value or anything outside of that. You might quickly yell plot armor during the final episode when someone isn’t instantly murdered the way the last few were but I suppose it helps to build up the hype for season 2 as well.