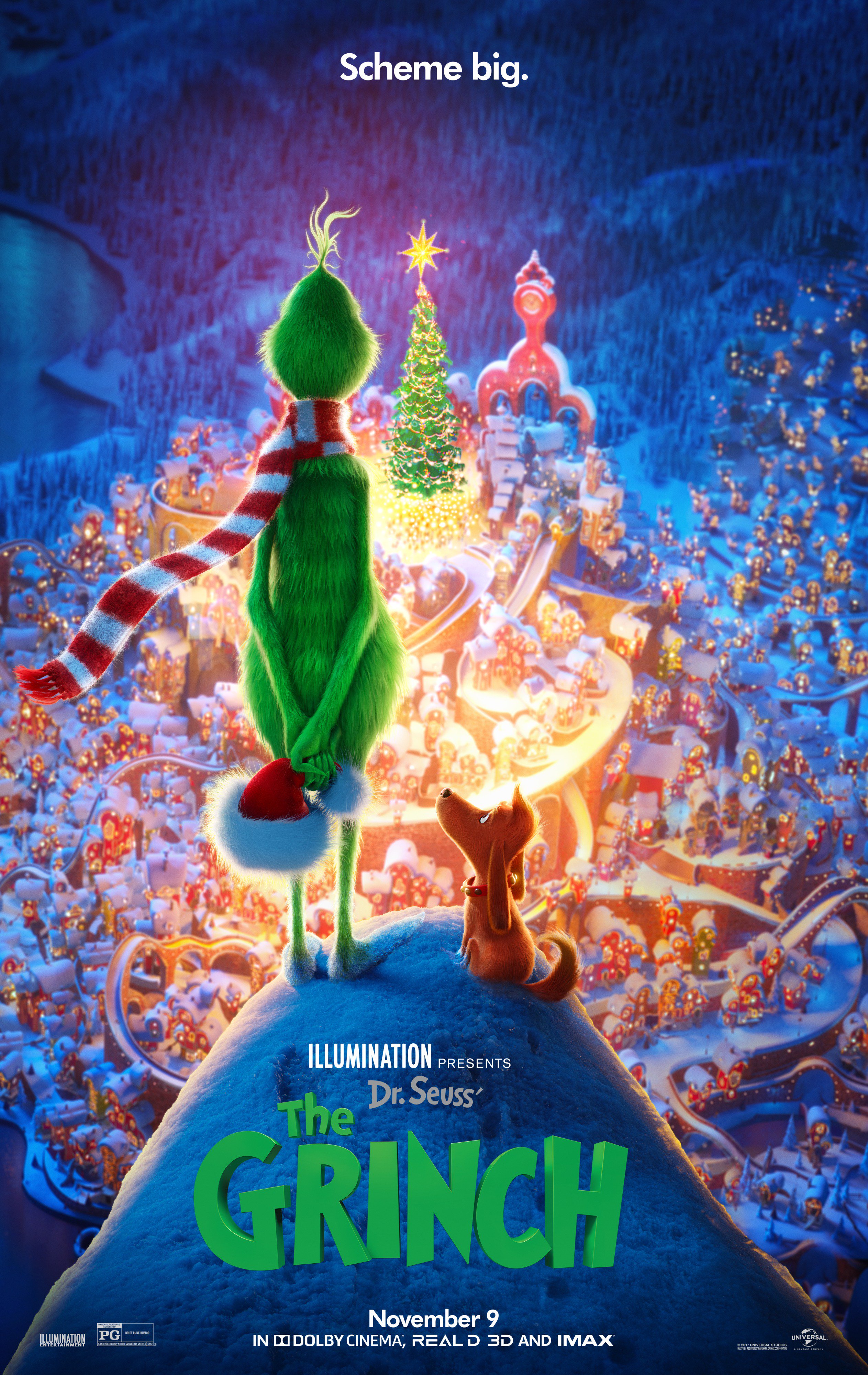 The Grinch is a pretty classic story although it’s been a pretty long while since I’ve seen any version of it. It’s a story that holds up though and I would have to say that this is the best adaption of it that I’ve seen. The characters are really solid, the animation is on point, and the story is good. When you mix that all together then you’ve got yourself a really solid combo and the movie just flies by.

The movie starts by introducing us to the Grinch. He lives in a pretty fancy cave with his dog Max. They have a pretty nice set up with everything running automatically and Max oversees the whole thing. In general it’s just hard not to like these guys at least with this first impression. Unfortunately for the Grinch he did not have enough food to survive Christmas without going into town. He heads out and decides to make life miserable for everyone else as well. When the Grinch learns that Christmas is going to be even bigger this year he decides that it’s time to shut it down. If he steals everyone’s presents then that should end things right?

Meanwhile Cindy is the main human here. She’s a little girl who is always spreading cheer around and having a pretty good time. Her Mom has to work really hard in order to support her though. Her only Christmas wish is for Santa to help the Mom out but it’s been tough to get in touch with him. She decides that she will have to lay a trap for Santa so that she can explain the wish. She gets some help from the rest of the kids in her neighborhood but will she really be able to take Santa down for the count? Only time will tell.

One thing that stands out about the film right away is the bright and colorful environment. The whole film just looks amazing. It’s some of the best animation I’ve seen in one of these films in a while. Maybe it comes down to the city’s design and the Christmas decorations but either way it really stood out. The characters are all really solid as well. Let’s start with Bricklebaum since he’s more of a side character.

He’s a nice neighbor who always ignores the Grinch’s slights and keeps minding his business. I can definitely respect this guy and his dedication to his craft. That’s the kind of drive that you really want to see from him. He’s also just fundamentally a good person. Naturally to the Grinch he is seen as quite extreme and over the top but it’s all very genuine. So he just really clicked as a supporting character. Then you’ve got Cindy’s Mom who is also solid and does a good job of managing everything at home. Even the other kids at least help Cindy even if they’re all ingrates for having to be guilt tripped into doing it. You know that Cindy would have helped them out with no questions asked.

Cindy is a pretty reasonable character. I’ll give her credit for being such a pro-active character. She was always right there in the thick of things. Her route from home to the cave or town was also a lot of fun. She’s got serious sledding skills that’s for sure. Then we get to the main two. Max is a really solid dog. He’s smart and very loyal. I was glad that the Grinch and Max had a really good dynamic here. They get along and make each other even better. They do have a disagreement in the film but it’s a pretty small one and they get on the same page again.

As for the Grinch, he is an antagonist at first of course. He’s mean to people for no reason like pushing the food that they want away or popping balloons. Whatever inconvenience the Grinch can cause you, he will do it. It makes him a pretty fun villain though. It’s not like he does anything too crazy either. Most of what he does is pretty mean spirited but amounts to just inconveniences here and there. Fortunately the townsfolk are so nice that they don’t pay him a whole lot of attention. It does mean that his character arc can feel a bit cheesy towards the end though. Anyone who knows about the Grinch story knows exactly how this is going to go of course. I thought the execution was pretty good though.

There are other side characters of course like the lone reindeer who hangs out with Grinch. The Grinch wasn’t thrilled about having him at first but ultimately relented which was the first indicator that maybe he had a heart after all. It’s just a nice story with some good emotional beats and quick pacing. The film never drags on or anything like that and the writing is good. At the end of the day those are the key ingredients to having a good movie. The ending is satisfying so then you’ve got a full product.

If there’s any part of the film that wasn’t needed then I would say that I could have done without the narrator. I know that rhymes are a staple of the Dr Seuss adventures so that’s probably why he is here but you don’t really need him. In my mind the film would have been just as complete without him and you can understand what is going on well enough without the play by play. I wouldn’t call it a negative though. It’s just one thing that I would tweak but it’s not something that holds the film back either.

Overall, The Grinch is a pretty good film. It’s always nice to see a quality Christmas film at the ready. This is definitely the definitive Grinch movie in my mind so if you haven’t seen any version yet then I would recommend starting with this one. It really embraces how Whoville is a lot different from a usual town. They go all in on Christmas and with the solid animation they’re able to show how much fun people have when travelling around town.

2 thoughts on “The Grinch Review”