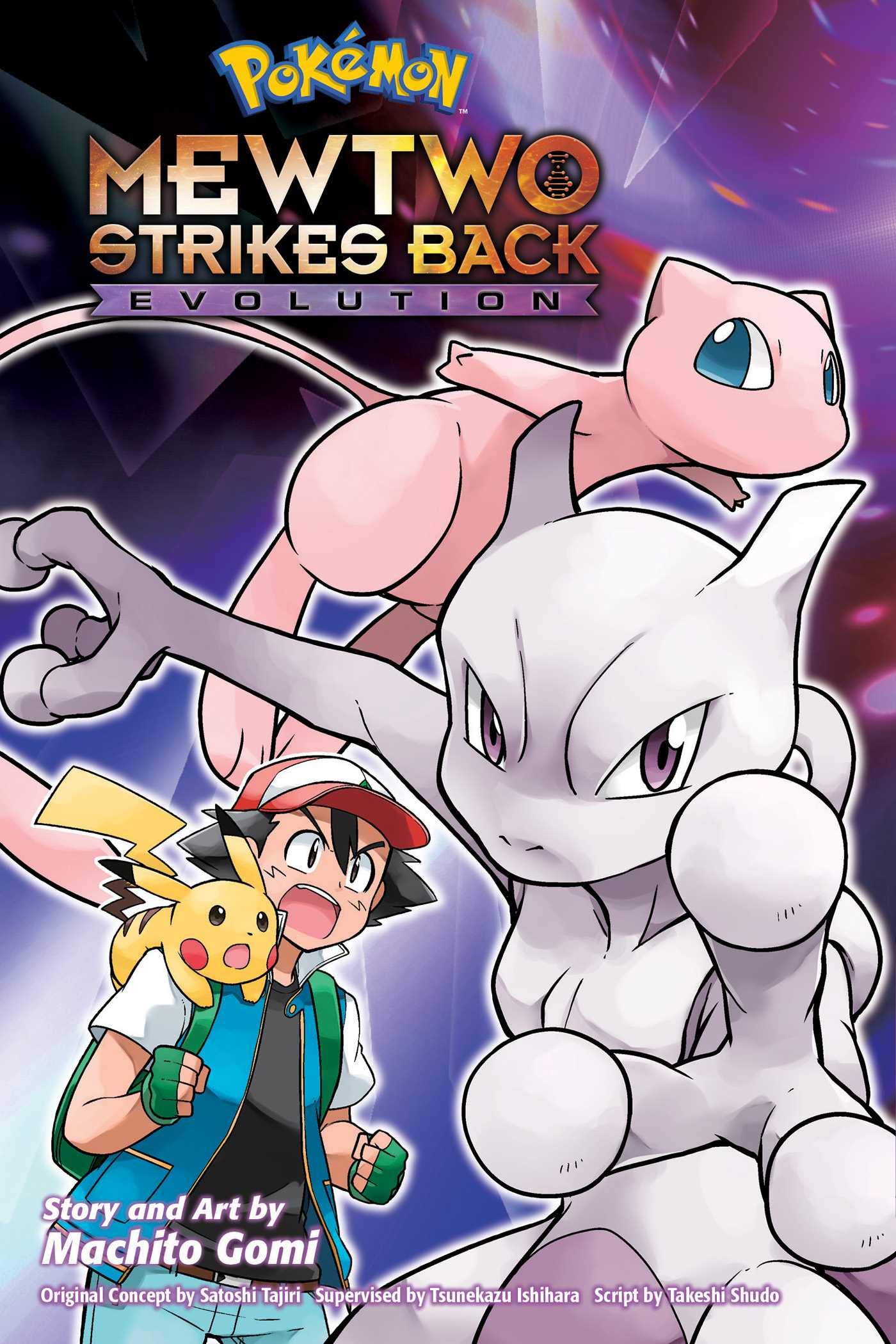 Mewtwo is pretty fortunate to not only get multiple movies/specials but even a remake. Then the remake also getting its own manga adaption is pretty interesting. Naturally it’s very close to the original story but it’s an adventure that holds up and it was executed well. The art is solid and Mewtwo makes for a good villain so at the end of the day you’ve got a good adventure here. It certainly goes by in a flash.

The manga opens up by introducing us to Mewtwo, the most powerful Pokemon in the known world. He was created as a clone of Mew and modified to be even more powerful than the original. Mewtwo didn’t understand why a powerful being such as himself should work for humans so he escaped and built a fortress. In order to truly test the limits of his abilities he decided to send invites to the world’s best trainers. This would solve the question once and for all of who was stronger, Pokemon or their trainers.

Naturally Ash and friends are invited to this. Ash has definitely earned this privilege since he has been defeating Gym Leaders left and right. Not to mention that the volume opens up with him beating someone in a Pokemon battle so we see his skills firsthand. That said, Ash isn’t thrilled when he learns that Mewtwo doesn’t just want a good fight but global domination as well. Can Ash really take Mewtwo down or will he have finally met his match?

The manga has to move fast to adapt everything of course so some areas are glossed over. That said, I feel like the movie may have done this as well. The whole crossing the ocean part is basically skipped as the manga takes you to the heroes arriving there right away. I’m pretty fine with that since the battles are the most important part but it’s also why I say the more volumes you have for an adaption the better since you get to dwell on everything more. I would call this a very solid adaption though as you hit all of the major beats of the story.

While I wouldn’t say the artwork is top tier it’s better than a lot of the other quick one shots. For example I prefer it to the Heatran arc. Some of the shots in the manga really stand out as well like Ash’s punch against Mewtwo. It was drawn really well and you could definitely feel the impact of the blow. It’s always good to see Ash right there on the front lines trying to defend the Pokemon. It’s only fitting that he would be chosen to represent the real Pokemon.

As for the battles with the clones, I suppose Mewtwo was ultimately right that cloned Pokemon are more powerful. They all won their battles rather easily. Mewtwo mentions turning off their abilities later so perhaps the clones have built in augmentations like psychic abilities that can be turned off? It’s hard to say precisely what the abilities do but at the end of the day the clones are definitely stronger than the originals by a wide enough margin where it doesn’t seem possible for an original to beat the clone.

That helps support why I believe Mewtwo to be stronger than Mew. They have a good fight here but Mew spends a lot of it just running away and dodging. Mewtwo is the one on the attack the whole time. I also find Mewtwo to be one of the most interesting Pokemon fighters. The fact that he won’t just sit back and allow the humans to control him is definitely a big deal. He has his own honor code and sense of justice so he isn’t going to just roll over and allow himself to be beaten. His ability to talk also allows him to explain his case a lot better than most could.

Outside of the main plot you’ve got Team Rocket of course but their plot is absolutely tiny. They barely have any real relevance to the story so there’s not much to say about them. Even Misty and Brock don’t get to do much here. Brock mostly just embarrasses himself while Misty looks good but isn’t really here to battle in the first place. The other trainers who were invited to the island don’t get to do much aside from be quickly defeated. Their Pokemon do look strong of course, just not strong enough to tackle Mewtwo.

This was back when Legendary Pokemon really lived up to their name. There was a huge gap between someone like Mewtwo and even the strongest of ordinary Pokemon like Dragonite. It just made a lot of sense even if it’s almost inevitable that someday the Legendary Pokemon would not be able to keep up and got power scaled straight out of there. The writing is solid and the adventure is pretty fun. As the story is only volume there isn’t a ton more to say about it. I guess as a miscellaneous note I do think this was Giovanni’s worst appearance in some ways. Mainly because he had a great situation going for him with Mewtwo as a willing worker and then he blew it by calling Mewtwo a tool and mocking him. What happened to subtlety? I know Giovanni has a ton of confidence but it felt a little out of character for him to antagonize Mewtwo like that. I feel like he had to know that this would not end well.

Overall, Mewtwo Strikes Back Evolution is a pretty fun remake. I still say the original story beats the remake but I suppose in manga format it’s super close. One thing that i do think looks cooler is Mewtwo’s new armor with the spikes. It’s a much busier design but it’s one that works well. The armor is something that would quickly put fear into any Pokemon trying to deal with this guy and it looks one of a kind so you know that an ordinary Pokemon would not be wearing it. I suppose soon will be the manga for the new Jungle film. We’ll see how that one holds up in the end. Whether you’ve seen the Mewteo story already or not I would recommend checking the manga out. It’s a pretty faithful adaption and the story’s a lot of fun.