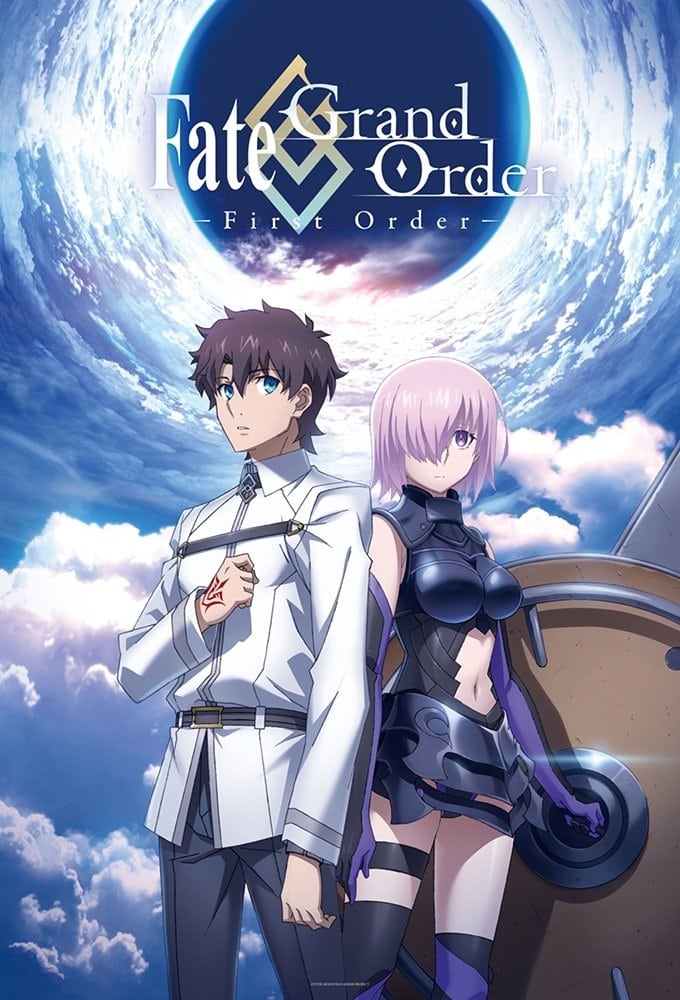 Grand Order is definitely a huge mobile game. You typically hear it referred to as Fate Go and in terms of sales there’s pretty much no other plot based mobile game that can match it. With a game being this massive it makes sense that it would span to become a whole franchise in itself. This movie starts us off with adapting the first part of the game and it’s a blast. It’s incredibly solid with a self contained story that perfectly ends off at a point where you’ll want to play the game to see where it goes or hope that the rest gets adapted.

The story starts by introducing us to some new concepts. There is an organization named Chaldea which exists to oversee the safety and continued existence of the human race. They do so by monitoring a globe that’s effectively a replica of the planet Earth that shows up to 2 years in advance. As long as this globe is safe, so will the Earth be. The series follows a new recruit named Ritsuka who is the final master who has been selected to help this organization. He ends up being thrown into the fire rather literally as an explosion occurs in the base which causes all of the other masters to be incapacitated or worse. This seems to be an act of sabotage and the globe has also turned into a ball of fire. The human race now has less than 2 years until they are obliterated. Rituska will have to use experimental time travel technology to warp back to the early 2000s where the Holy Grail War of the iconic Fate Stay Night is going on.

However, the timeline has been warped of course so nothing is as it should be. There is no Shirou Emiya left here and Servants are running around without masters. Ritsuka will have to find the source of this anomaly and revert the timeline back to its intended path. Fortunately he won’t be alone. A nice girl named Mash is here with him as a Servant. In Fate, a “Servant” is a fighter of unimaginable power who makes a contract with a master so that they can accomplish their goals. In the real world Mash was close to death after being crushed by debris but in this world she can harness extra powers as a Demi Servant including superhuman physical abilities as well as an unbreakable shield. The two heroes will be going up against Heroic Spirits with a lot of experience though so this won’t be easy.

Grand Order throws you right into the action and that’s really how things should be. You’ve got enough context here with the time travel and the idea of humanity being on the brink. From there you can enjoy the high concepts and action. The animation here is really high tier. The action is on point at all times and it’s nice to see all of the contrasting fighting styles. You’ve got sword fighters, archers, mages, shield based fighters, etc. Since all servants in this universe with few exceptions are famous heroes from various folklore and even real life, it’s always fun to see how they will be presented. One of the standout fights here would have to be Mash’s battle against Medusa while the Archer vs Caster battles are excellent as well. You’re not going to find any action scene that is sub par here or even average. They’re all just great. I would say the Saber fight is probably the weakest one as it’s less about choreography than the others and focuses on which is stronger, the sword or the shield. It’s still a satisfying conclusion though.

Ritsuka is a solid main character. He’s heroic and quick on the uptake. He may be a new recruit but he’s not panicking or yelling the whole time whenever he learns new details. When they tell him about the time travel he just jumps right in to help out with the plan. He may not be able to fight at this point but as a Master he does give Mash energy so he can at least focus on doing that. Then you have Mash who is a solid heroine. She’s fairly emotionless the whole time. Her backstory will get more detail in the show but you can quickly understand what her core personality is. Mash is very down to business and as a result she is able to fight very efficiently. She may be weaker than the other Servants but with her calculating fight style she can at least hold her own for a while.

There aren’t a lot of people who use a shield as a primary weapon either so that’s pretty unique. Then you have Olga who was the field commander in Chaldea. She has skill as a mage and it’s implied that she could be a formidable master but something is holding her back. She’s a fun enough character even if she typically exists to hold Ritsuka back from his attempts to jump into the fight. It’d be nice if she took a more active role to help but realistically the extent of her abilities seem to be basic energy blasts that wouldn’t work on any of the power powerful opponents. She’s a fun character to have around though.

Then we have Romani who has to step in as the director since basically everyone died in the fire. He went from being a humble doctor to the top role so that was quite the switch. He’s a fun guy though and likes to go about life on his own pace. He may panic a little more than some of the other characters as he is usually completely out of his depth but he tries his best. There’s also an animal mascot in the film who seems like he’ll be around for the long-haul but right now has not done anything for the plot. When an animal like this shows up though you know it’s going to end up being important near the end so keep an eye on this guy.

There’s also Lev who is one of the higher ranking members of the team. There’s not a whole lot to say about him here. Once we go to the Stay Night era, naturally we see some of the hype Servants although a lot of them died off screen before the series starts. It makes sense that Archer would still be around though. I would say he’s easily the most underrated Servant which I think is intentional on his part. I do question whether he could truly be controlled here since his “Independent Action” skill should make this completely impossible. My best guess here is that he has just decided to help Saber out with her plan because it’s another way to stick it to a certain character’s motivations. This other character would not agree with any of this. Of course another explanation could be that the subtle corruption influence makes it so Archer isn’t being controlled so much as influenced into really thinking this is what he wants to do. It’s a debate in itself but I would be on the first side.

Then we have Caster who is a lot of fun. As the Lancer in previous incarnations he was always one of the most honorable fighters and you could always count on him to make the right decisions and help out when needed. He keeps that heroic nature about him here as well. While some Heroic Spirits may not feel….Heroic, that’s never an issue with him. I do think he has more skill in his Lancer incarnation but he performs really impressively in this film. I do like the fact that in Fate any hero can be summoned in any role since it shows that they have so many skills that they can properly service any role. That said, I would assume they all have their specialties and that the first time we see them in FSN it is in their ideal roles. Medusa (I think this would be the Rider class) also looks pretty solid here. She definitely had quite the body count by the end of the film and her close quarter combat skills were impressive.

While the film goes through its action in a fairly standard fashion without getting overly gritty or anything, there’s one scene where you feel like it’s there just for shock value. Lets just say one statue bleeds a whole lot when it breaks, yet later on when a bunch of other statues are destroyed there is no blood to be had which makes a lot more sense. So that scene felt a bit forced but it’s a super minor thing and I wouldn’t call it that extreme. The film has a dark color scheme but that’s more for effect then trying to be edgy. It feels like Fate always takes place at night and I suppose that’s because there would be less humans getting in the way of the fights. I recall some kind of explanation like that in the first series although of course attacking in the day is still allowed.

Now you may have some power level questions by the end of this and that’s fair. Some of the fights here do go in a way that you will have a tough time buying but when the main characters are so severely outclassed you’ll probably expect that from jump. Particularly since all of the Servants here have been bumped up even more than usual. Of course one does have a habit of being defeated a lot but even so you get the feeling that Mash and Ritsuka would die as soon as they entered the battle. Even Caster really got lucky here as I don’t see him being able to even remotely be able to challenge Archer. As a Lancer I think he can put up a good fight and maybe even take the win if he can defeat Archer before the latter has the chance to use his Noble Phantasm but as a Caster I don’t see that being an option. The actual fights are still a lot of fun though.

The soundtrack here is definitely solid. You have a lot of the grand Fate themes that you will have come to expect. The story feels really grand and lives up to the title with the music amping it up like this. You always expect that Fate will be firing on all cylinders with the technical aspects and this film is no exception. You’ll be at the edge of your seat right away. The writing is great as well with the characters having a lot of sharp dialogue and considering all options. We also get a plot twist at the end of the film. It comes out of nowhere and is definitely effective. You’ll also feel bad for one character since things don’t go quite as planned. Then the ending has a big cliffhanger leading to a bunch of paths with a lot of potential.

Overall, First Order is a great introduction to the Grand Order timeline. I love time travel so seeing that introduced was naturally excellent. The future timeline and snowy landscape was also fun. It’s just a very interesting view of a possible Fate future with a lot of things to consider. The film really flies by so it’s over before you know it. The animation is top tier and the soundtrack is on point. I look forward to seeing more of the Grand Order universe and having them take advantage of the limitless possibilities with this plot. With 7 Singularities to correct and each one being in a different time period you know those will all make for pretty epic adventures. I’d definitely recommend checking this movie out.