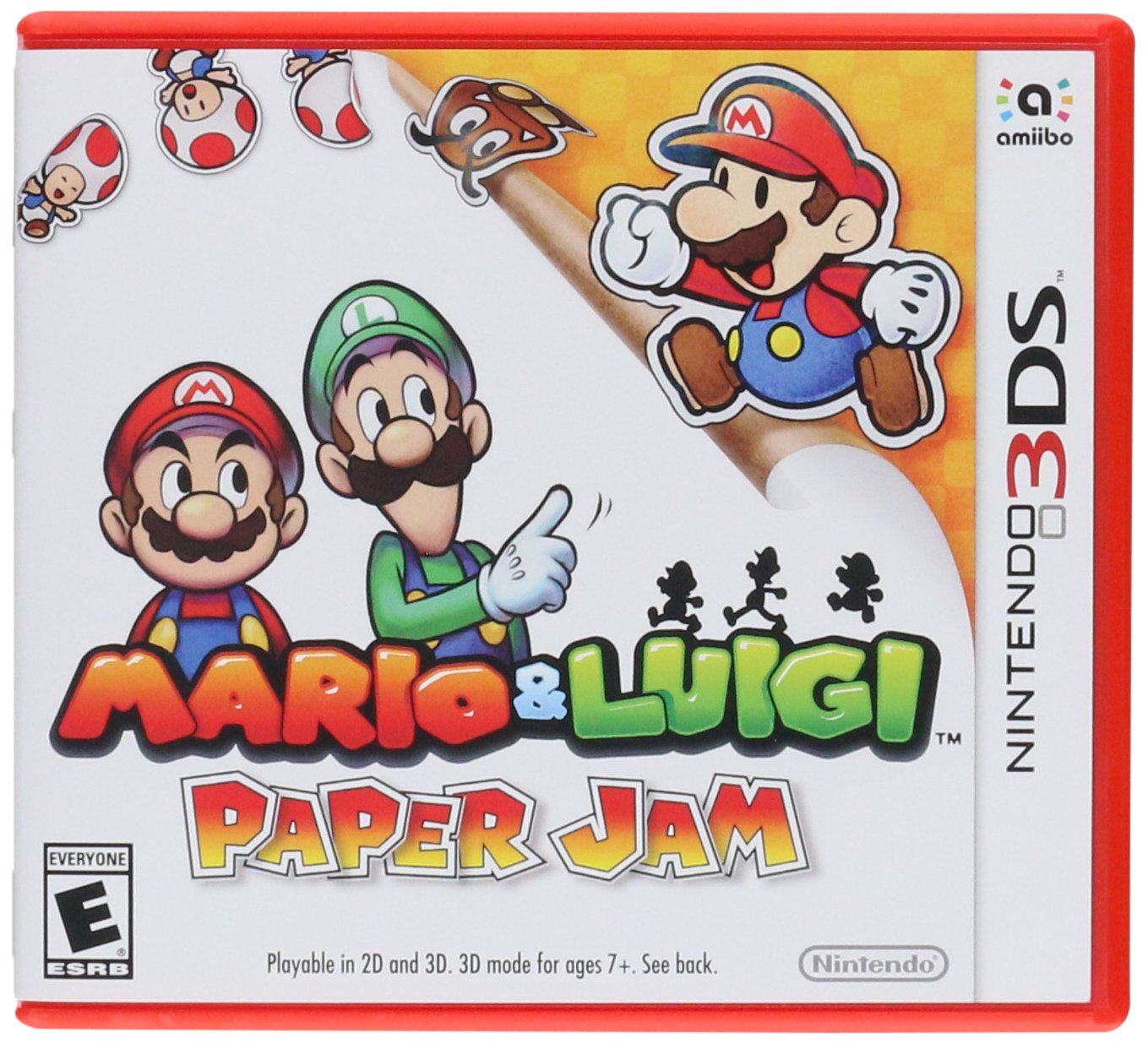 At long last I’ve made it to the final entry in the Mario & Luigi series. It’s definitely been quite the journey playing through all of the installments. To date my favorite one has to be Bowser’s Inside Story. That one just had the perfect blend of humor and fun gameplay. Each game has its own charm though. Paper Jam does end up feeling like a big step down from the last games with its story but it’s nice that we have Paper Mario around. I would still say it beats the original game in the series which was Superstar Saga but it ends up losing to all of the sequels.

The game starts with Luigi trying to fix a hole in the library but unfortunately he ends up opening a book to the paper universe. Everyone comes flying out of it including Paper Bowser. Now the Mario bros have an extra enemy to worry about and a lot of scared toads. Fortunately Paper Mario is here to help out as well. From there the plot goes in a rather standard fashion as both of the Princess Peach versions are kidnapped by their respective Bowsers. Can the Mario Bros and Paper Mario save them?

There’s one thing this game can’t capitalize on unfortunately and that’s the whole crossover aspect. The issue for this game is really that none of the main characters can talk and Peach isn’t around a whole lot. Usually in a crossover I want to say at least 50% of the fun is from seeing the unique character interactions. You can’t get any of that here. Both Marios basically act the same and Paper Luigi doesn’t even appear so we can’t see what he’s up to. Paper Mario does outshine the standard version a lot here though as he saves their lives multiple times. He is the guest star though so it makes sense. To balance things out I would say that Bowser does perform better than his paper version though.

When we do get dialogue it’s typically pretty fun though. The best scenes are naturally involving Bowser as he continues to act as a supportive father to Junior. I’ve really enjoyed how this series has humanized Bowser. He’s still a villain but he has a lot of personality now. When you think about it, the plot here is almost literally the same as every big Mario game as it’s just Bowser kidnapping Peach. That’s the most unfortunate part about this but at least the script is good so the story won’t drag on or anything.

The gameplay is your standard turn based system from the previous games. You can jump, use your hammer, special abilities, and other such techniques as needed to win out in the levels. I like how the system is active so you can actually learn enemy movements and attempt to dodge their blows. It gives a little more life to the system although at the expense of each battle taking longer. It’s always been a pro/con kind of thing. The only thing I don’t like that has always been the case for the series is that leveling up takes forever. This is due in part to the enemies not dropping enough EXP and the battles taking a long time. I spent at least 5 hours just on leveling up, possibly more time than that. I’m cool with leveling up for the most part as I just zone out and have music playing while leveling up or things like that but it takes really long to get anywhere at times.

For this game’s new gameplay feature we have giant paper mache battles where you get to take control of a figure and attack your opponents. I admit this one isn’t very fun but you don’t have to do a whole lot of them to it’s not bad. Each game always has some kind of backup gameplay and I’ll take this over the Dream Luigi style from the last one. It uses whole new gameplay mechanics and such so I can definitely appreciate the work there.

Paper Jam is shorter than the last few Mario & Luigi games but it’s still a reasonable length. It should take you 20 hours or so to beat this one. There is also a lot of replay value as you try to earn a lot of collectibles and beat the Arcade missions. I expect doing all of this will take you a very long time to be sure. At the very least you should reach 30 hours and that’s a pretty generously low estimate. Considering that you can get this game for a pretty good price now, it’s definitely worth the purchase price.

The graphics look good as expected. The level designs are very likely. The character models are on point and the soundtrack is also decent. It may not have the same pop as the last two games but it works well enough. You still feel a good amount of energy in the stages which is the important thing. It does feel a lot safer though which is inline with the more standard story. The last games had final boss themes like something out of Final Fantasy but the themes here don’t have that grand scale anymore. It’s too bad since Mario & Luigi used to really be able to go all out.

Overall, Paper Jam is a solid finale to the series. I can see why a lot of fans may have felt disappointed when the game’s trailers first came out since it is a big downgrade story-wise but the gameplay is as sharp as ever. If you look at this game on its own merits then it certainly holds its own. You’ll have a good time playing through the game and at the end of the day that’s what counts. I definitely hope we do get a new Mario & Luigi game at some point. There’s certainly more you can continue to do with this style.