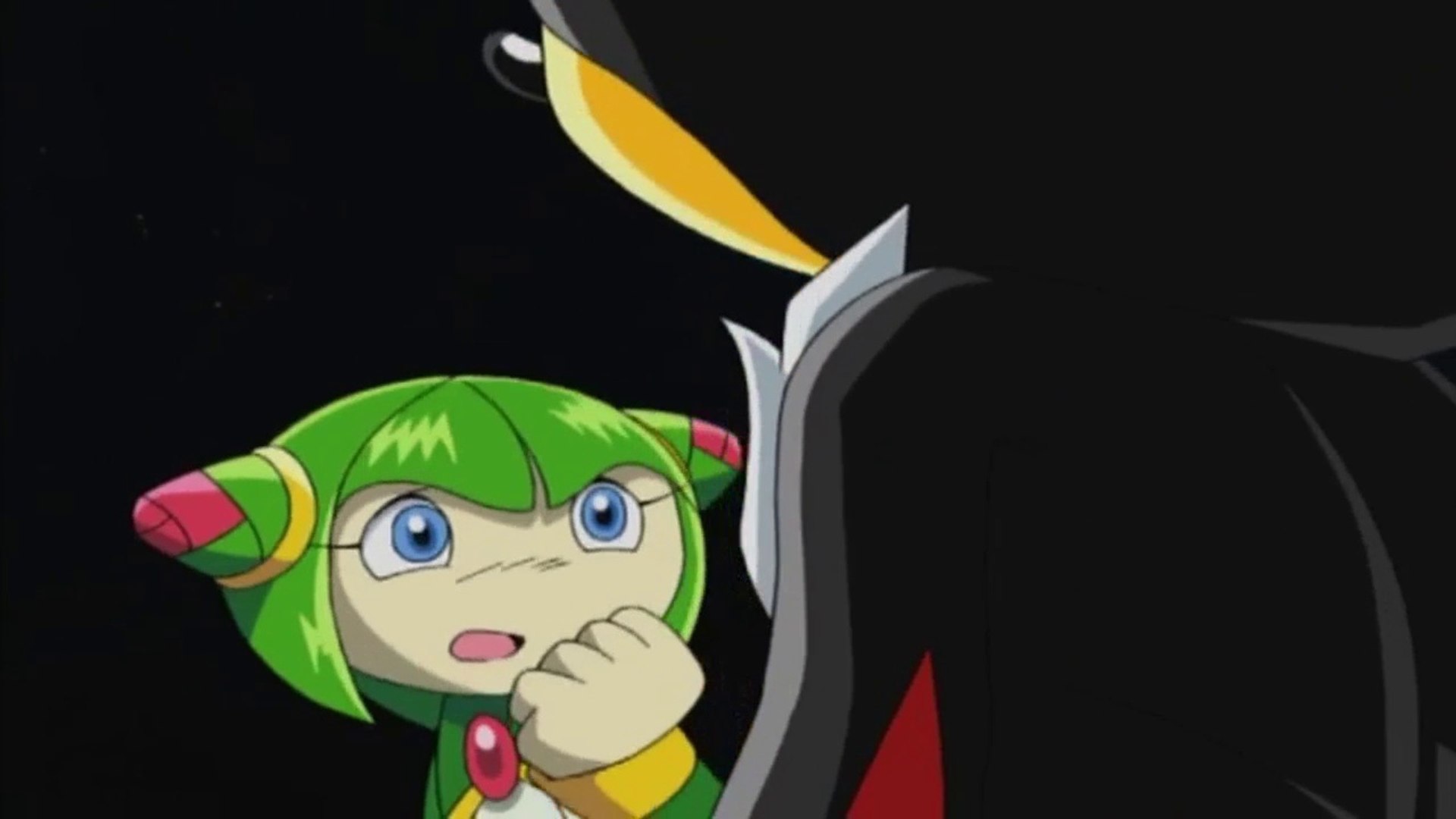 All right guys, it’s time to tell you all who I think is the traitor from UA. Now lets just get a few disclaimers out of the way. First, we have to go under the premise that there is a traitor and that this whole thing wasn’t just some wild goose chase. That is a very real possibility after all but not one that would be very satisfying. There’s also the theory that Deku or someone else is unknowingly the traitor sort of like Cosmo from Sonic X. Essentially in that series the aliens could see through her eyes which alerted them to every possible move the heroes could make. Maybe All for One is able to see through Deku or something like that. This is going to assume that there is a traitor who is knowingly betraying the heroes. Assuming that to be true, we can then narrow this down to Class 1A since 1B wouldn’t make sense narratively.

Could it be a teacher? I would say no because too many of them have been ruled out at this point. Midnight and Aizawa have inner monologue that would contradict this along with All Might and their appearances in Vigilantes back this up. I guess we have reason to be suspicious of the principal or the Present Mic guy but both of those would not make a lot of sense. I mean…the principal would be kind of fun but I don’t think that’s going to happen. There are 20 kids in Class 1A so lets start ruling some out.

The first 6 are easily ruled out. I would consider them to not even be suspects.

Deku, lets be real here guys. It’s not going to be Deku. Again, unless he is doing this subconsciously it would just go against every kind of sense imaginable. He has unlimited inner monologues that would go against this. Likewise it’s not happening for Bakugo. The guy may have a very different way of going about being the best, but being a villain is flat out not going to happen. 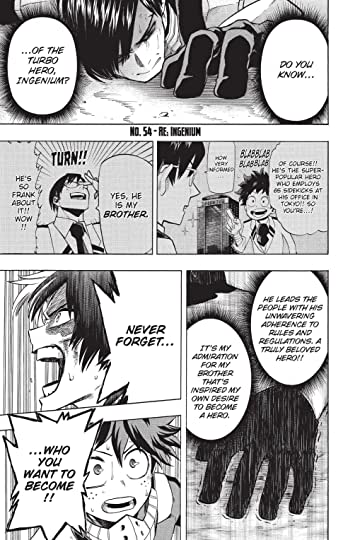 Ida, his whole character is about trying to live up to his elder brother’s reputation. He’s not going to throw that away for anything. I may not be a fan of his character but I wouldn’t deny that he has a heroic motivation. Likewise you have to throw Todoroki in there as well. After seeing the worst of Endeavor first hand, there’s no way he would go down this route. He wants to be the number 1 hero as well after all. 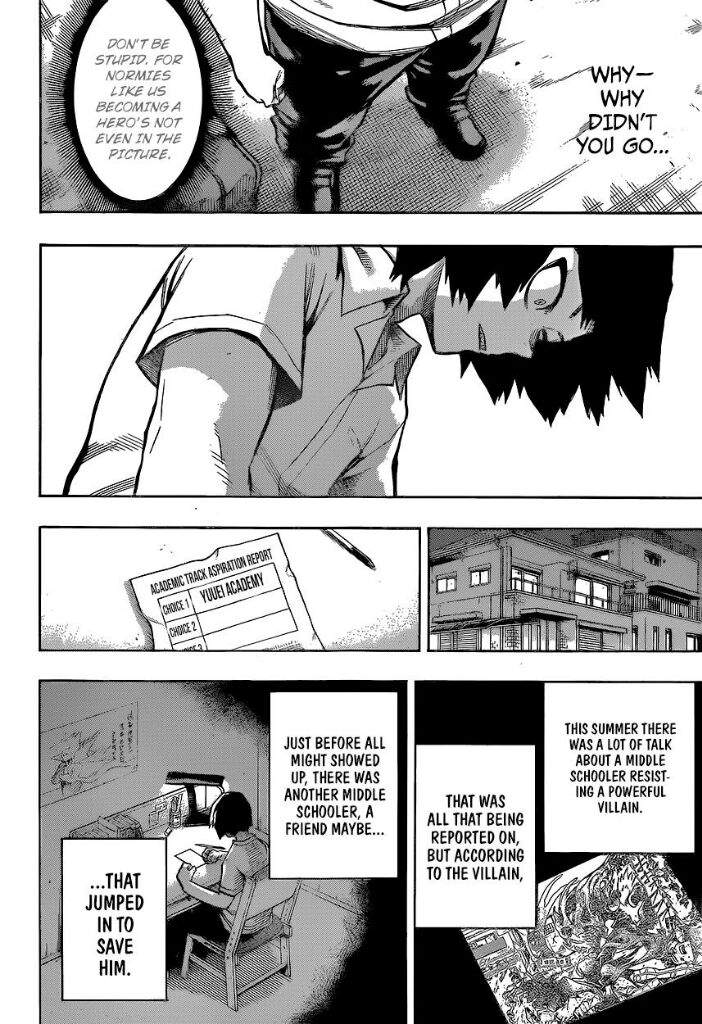 Kirishima’s in a similar boat. He had the whole origin story where he was too afraid to stand up to the villains and had to be saved by Ashido. To that end he has continued to hone his skills to be a great hero. While you could say this isn’t as rock solid as the first few, I would say that is very relative. He ultimately has proven himself to be a true hero. I would also vouch for Yayorozu. She may have a lot of doubts in her hero abilities but she had obtained a good bond with the rest of the kids and keeps improving herself. Any doubts that you may have had with her character should have long since vanished at the series went on.

Too irrelevant to be the traitor

Look, the traitor has to be someone that actually matters. We need to have some impact after all. So, Sato is out. Does anyone even remember his name without having to look it up? His hero name of Sugar Man is memorable but I definitely would not have remembered the human name otherwise. He’s not going to be the traitor. I would use the same logic for Shoji. His 4 arms are handy but the guy barely gets any lines throughout the series. So there’s not much to prevent him from being the traitor but I just don’t think it would be very powerful.

Already used as a fake out 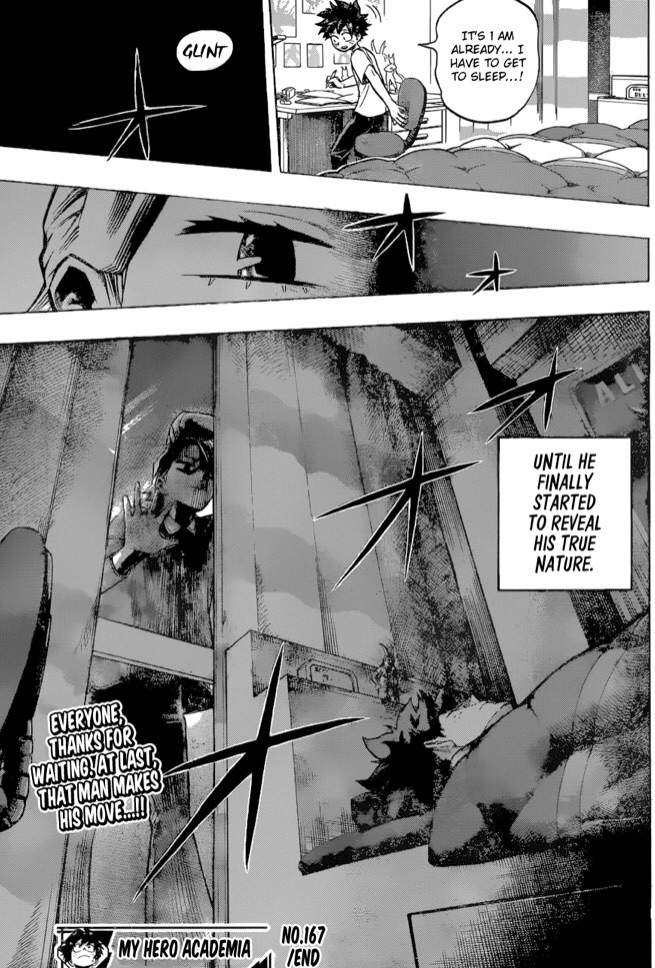 Aoyama already had a big cliffhanger where we thought he could be the traitor for a second there. There’s no way they would actually use this twist since it was played off as a gag. Sure, it could be a big brain move by the author but I don’t see this actually occurring. The instant his betrayal was played for laughs I knew that there was no going back.

Opens up too many troublesome questions

Mineta would be problematic for a lot of reasons. His actions barely fly by as comic relief. If he is a serious villain then suddenly his harassment of the other students becomes a lot darker so they’re not going to do that. That’s why you can’t have this guy be the traitor, it’s a fairly unique situation but one that guarantees Mineta has to stay on the heroic path…not that I even consider him to be a hero to be honest. The guy’s a disgrace.

We’re down to the final 7 so lets take them step by step.

First up is Froppy. Sure, she is a very tempting pick because of her relationship to Deku. I also don’t recall any specific inner monologue that would contradict her being a traitor. That said, I can’t think of any possible motive for her here and she’s put herself in a lot of danger throughout so I’m going to take her out. It’s a weaker case to debunk her but that is why she made it near the end for me.

Kaminari: He was a prime suspect for a while but his whole being dopey is just too convincing. A true traitor wouldn’t put himself in such a spot where he could be exposed. He could have said anything while he was dazed which is too risky. He has enough character moments where this would be a pretty intense twist but I don’t think the quirk works well to that end.

Ashido seems far too heroic to have been corrupted like that. I find it hard to believe that she would have gone over to the dark side based on the flashback we already have of her with Kirishima. The reason why she is closer here is because a lot could have changed since that flashback. She always seems rather cheerful but some of the most sinister villains have had a cheerful demeanor. Still, I will rule her out because we have even more suspicious targets.

Tokoyami is a decent pick given how he likes the shadows so much, but is that not too obvious? Additionally, I want to say that Hawks would have noticed something was up since they worked together in the hero exams. At the same time, perhaps that is why they were on the same team since Hawks may have suspected something beyond what he was saying on the surface. It’s a bit on the flimsy side though so I wouldn’t put a lot of stock in it.

Lets take Jiro out next. While her hesitancy to play in the concert and her general lack of inner monologue is disturbing, I’d still be surprised if she was the traitor. She was very nearly killed during the season 1 invasion to the point where it couldn’t be faked. She may have the resolve to be willing to die for her cause but I don’t see this being the right answer.

Hagakure is one character I have long claimed to be the traitor ever since the “Deku choke S1 opening” theory. That said, the fact that she is so suspicious and constantly acts like a traitor makes it seem too obvious. Her power is already perfect for deception after all. I dunno, it just seems too straight forward but at the same time I would have no qualms about her being the traitor. She is an excellent runner up. 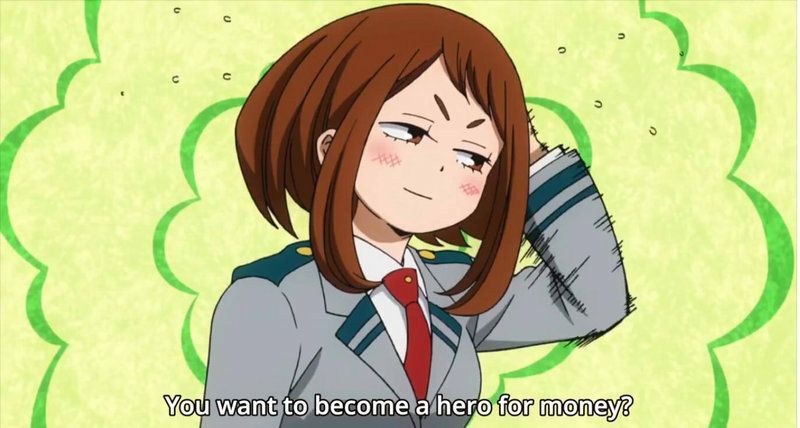 No, it has to be Uravity. It just makes the most sense. She has a clear motive which is the fact that she needs money for her parents badly. Being a hero doesn’t pay incredibly well and while the spinoff MHA Smash plays this off as comedy, she is quite desperate for it. It could be as simple as the League of Villains telling her they will pay her for some intel. They’d let her know they weren’t going to directly hurt Deku and she would be on board.

I don’t see Uravity being a totally evil, mustache twirling villain but a traitor who was manipulated. She badly needed money and wasn’t able to get it legitimately so she faltered and joined the group. Ultimately that’s why she’s my pick as the traitor. It will also be the ultimate gut punch to Deku and his enthusiasm towards being a hero. It’s hard to just get up after experiencing something like that. 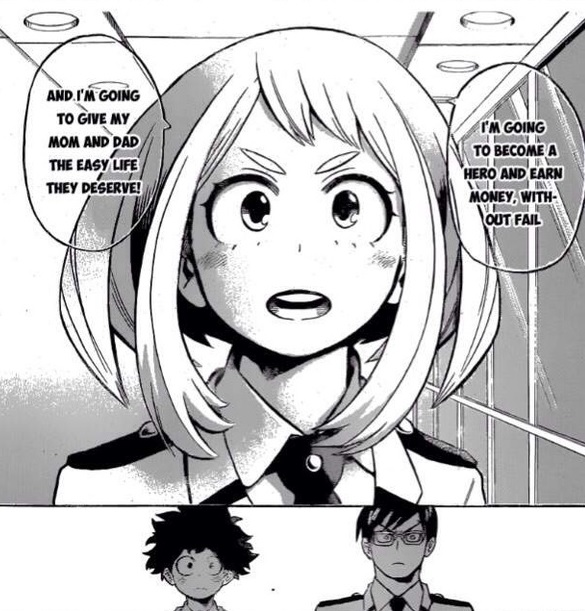 So that’s my answer here. Uravity is the traitor.

She just ticks off the most boxes and that would be a pretty hype way to start closing out the series or at least this part in the timeline before the next time skip. Taken with the right context her last quote there could sound rather ominous as well. Only time will tell but if we’re going to do a traitor twist I think it has to be in the current manga arc so hopefully that’s not too far from now.