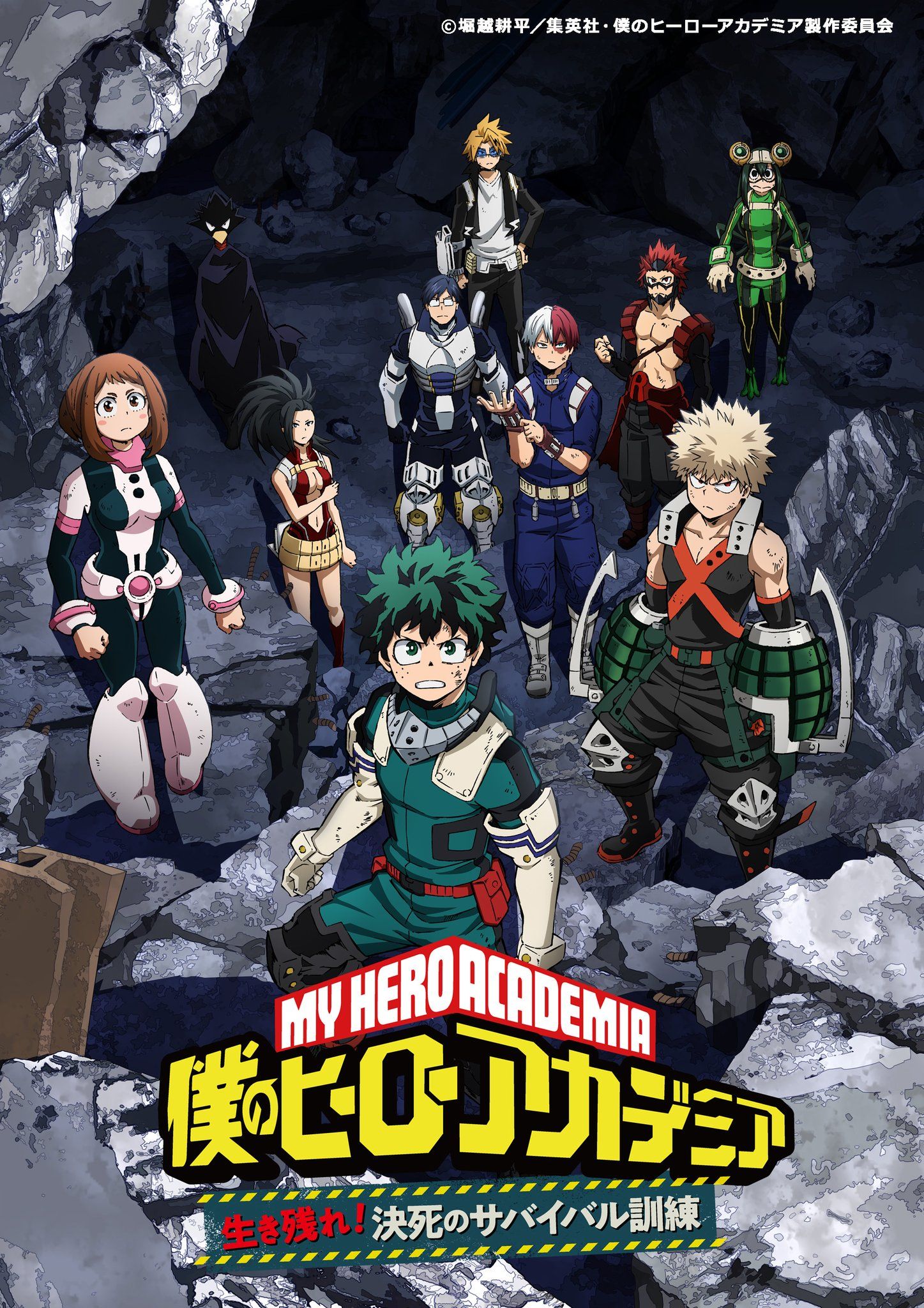 It’s time to look at a recent My Hero OVA. At two episodes you do wonder a bit why it wasn’t just released as one special or placed inside the show itself to buy it 2 weeks for the manga to get further ahead. I suppose since MHA is more of a seasonal show than ongoing they wouldn’t need 2 extra weeks. Well, it’s always fun to have some more adventures so that’s pretty neat. This one’s about getting the kids closer together with their bonds and teamwork so we get to see them in another training session. As always you could say that Bakugo is the MVP here.

The training session is simple, the students of UA have to go inside a partially destroyed building to find a lost civilian. For the purposes of the training they are to imagine that this is a normal person but in the exercise they will use a training dummy. Things fall out of the expected parameters when the building caves in. The students must now prioritize getting out of here alive. Ida has already been knocked out so the others need to get him to a doctor. The pros refuse to help so the kids will have to do everything. They’ve already split up into multiple parties though so even coordinating a plan will be difficult. Some kids may have to take things into their own hands from here.

One of the reasons why Bakugo is always a fun character is because he takes action. While everyone else is just talking a lot and standing around he is actually doing things. Bakugo is not the kind of guy who just takes a backseat and hopes for the best. He actually jumps in time after time. This special is no exception as he immediately goes for the backup power supply and also makes sure to complete the mission. While the other teams panic or immediately forget about the mission, Bakugo stays on task. He also recognizes when other kids are bluffing and stays back to protect them. His confidence is still absolute as always and when you mix his explosive power into the mix then it’s not surprising that he will one day be a pro.

The other vanguards here would be Deku and Todoroki. Todoroki is crucial towards the end of the special with his ice. It may not be a permanent fix but he covered a large chunk of the destroyed area so that was pretty good. Then you have Deku who always comes in clutch for executing the plans and crushing any extra debris. If not for the other kids being around Deku would be able to escape this area easily. His Once For All power is really well suited to this scenario. I’d make the case that it’s the best all around ability from all of the students but that’s borderline obvious with Mirio’s ability being the only one that’s close so I won’t bother.

It’s a fun special that goes by pretty quickly. All of the students who are partaking in the exercise get their moments to shine except for Ida. I guess the reason why he got his injury was when he tried to save another classmate so he gets some points for that but if his burst was a little quicker he would have been okay. Just have to throw that out there. I imagine fans of the kids who get less of a role as the series goes on will be glad to see them being useful here. Everyone has a different quirk so while in a fight it may be clear who the strongest are, some of these characters are really good at support. Take Froppy for example. While her elastic tongue isn’t viable for combat, it was helpful here for catching one of the kids who was going to plummet to their doom. Since most of the heroes can’t fly that kind of ability is a really good safety net.

The animation looks pretty solid here. It’s like a standard episode. I wouldn’t say it goes beyond that but since there are no fight scenes in this special they probably figured that would be a waste. As long as the character designs are on point and the animation is smooth, I wouldn’t say there is any real issue that should be had. My Hero’s animation has always been consistently solid. We get the classic tunes from the TV show as well which further gives it the look and feel of a classic episode.

Overall, Do or Die is a good adventure. It’s always fun to see the heroes in new situations. It’s the very reason why “filler” as a concept isn’t bad. You’ll only be with the characters for so long so a few extra adventures sound good to me. It’ll be good if we can get some more OVA adventures with the crew. That said, I’d like to see the writers challenge themselves to give us a quick OVA with some actual villains and fight scenes. Naruto and the Water Village is a good symbol of how you can do a quick adventure with brand new villains and some fights. Just have the heroes go on some kind of vacation where it turns out there are some villains present. Then presto, you’ve got yourself a quality adventure. Regardless, fight scene or not I would recommend checking this special out if you’re a My Hero fan. Alternately, this is a good pilot of sorts if you’re someone who’s on the fence about starting the series. It’s pretty much a day in the life of MHA so if you like this then odds are good that you’ll like the series.