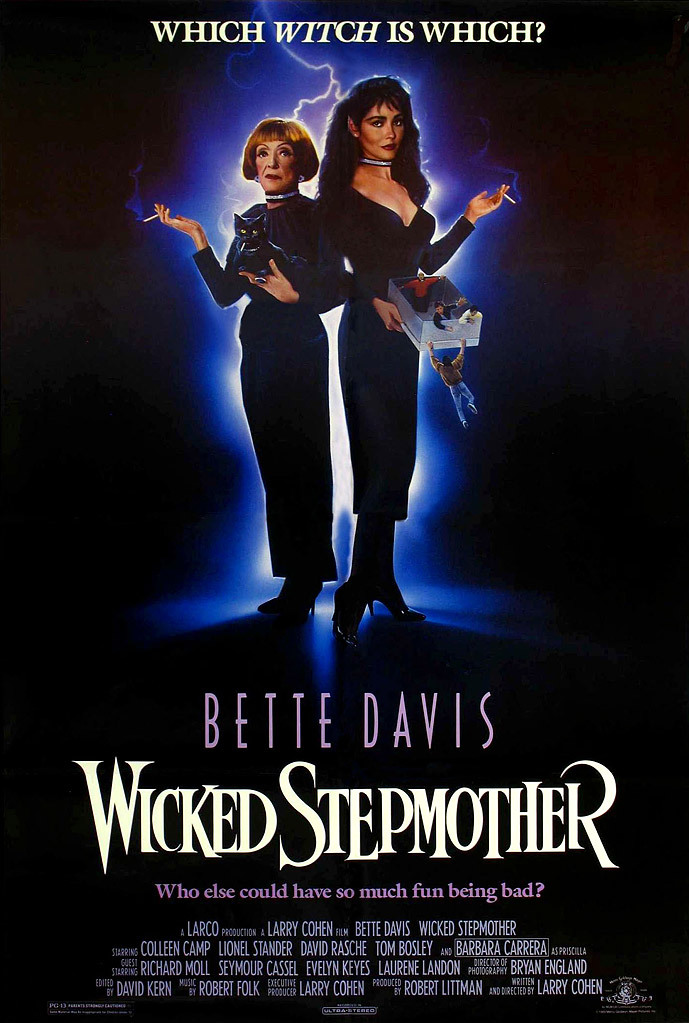 When you have a film about a wicked witch who joins the family you know that things are about to get rocky for the whole household. Unfortunately the witch tends to take everyone down pretty quickly so you don’t expect a lot of likable characters. I would say that’s true for this one as well. By the end of the film most of these characters just don’t stay strong. It’s a film that will give you a good amount of laughs but doesn’t overcome its negatives.

The movie starts with Jenny and Steve finally heading to her father’s home. He had been pretty quiet lately so they want to make sure he’s okay. Well, it turns out that he married an old lady named Miranda and she has completely changed him. Sam loves watching TV all day now and has stopped being a vegetarian so he could go back to meat. The two of them seem pretty content but Jenny doesn’t like this one bit. She wants her father back to his old self but to her dismay even her husband Steve is getting along with her just fine. Making matters worse is that Miranda’s daughter Priscilla has shown up as well and may try to break their marriage apart.

I’ll give the movie this, the opening scene is legitimately filmed as if this was a horror title. You have a lot of suspenseful music the whole time as an inspector walks in a house and we learn that the tenants have vanished. Apparently someone has been going around bumping people off across the country. We then find out that the family was shrunk into tiny dolls and nearly died since they could have easily been stepped on. At this point we learn that Miranda really does have super powers so this doesn’t bode well for the heroes.

Now, this is a comedy film so don’t think that the whole movie is going to be suspenseful though. It’s because this is a comedy film that they can effectively use horror scenes like that. It’s a great amount of contrast. There’s probably a name for this kind of scene but it’s a scene that’s so serious you can’t help but find it funny since you know the film as a whole isn’t a horror.

The scene with Inspector MacIntosh trying to find the culprit among a group of old ladies made for a fun scene as well. These ladies were really tough as they were beating people up and did not act their age. On the whole I would say the film had a lot of its best gags in the first half. You also have a scene where an old lady throws Priscilla out of the phone booth since she had dibs on the next call.

There’s a fun scene where Priscilla pretends that she is melting as well before revealing that the Wizard of Oz made that up and it doesn’t work on witches. MacIntosh actually going to a school for wizards was genius as well. Honestly, if I found out that witches were for real then it wouldn’t be a bad idea since all the things that I thought were hogwash would suddenly have some merit. It’s just a shame that he didn’t actually learn anything but I would say he had to be the best character in the film by far.

So we’re off to a good start but once we get to the actual film that’s where it falters. So with an evil step mother throwing a hex onto Sam you already know she is going to try this again. She messes with Steve as well. Honestly you expect that he’s going to cheat on his wife with her early on in the film since even as an old lady Miranda seemed to be flirting with him. With Priscilla around…well Steve never stood a chance. The guy faltered quicker than the poor guy in the Cinnamon Toast Crunch parody commercial. Steve didn’t seem devoted to Jenny for more than a few minutes.

The film plays up the fanservice angle with Priscilla quite a lot. Outside of the affair with Steve she gets a very random dance where she also seduces the private investigator that Jenny hired. So much for will power right? Priscilla is able to dominate any man that she sees in moments since as a witch she also has absolute hypnosis in addition to her other abilities. The heroes have no shot right from the jump.

Let me quickly explain the Miranda and Priscilla situation. So, they are mother and daughter, however they can’t inhabit the same body so one of them always jumps into a cat. The body seems to change around the soul so they still look different. It’s a little odd and you’d think that with their magical abilities Miranda could just make herself look young anyway though. If not for the issue of needing another actress in the first place the plot would have made more sense to just have said that Miranda was shape shifting.

Actually…that would have made more sense anyway. Just say she is constantly shape shifting to make it easier to seduce everyone. It also removes some of the plot holes from later on. Alas, the film didn’t go that route. Neither Miranda or Priscilla are all that likable or even logical. With the kind of abilities they have, there is no reason for them to even go through with the theatrics. They could have taken Sam’s money at any point. They could probably conjure it up, but if that’s not possible just mind control him to sign something giving her the money. With witch abilities this would be easy.

Well, we’ve established why Steve’s a pretty bad character and Sam’s in the same boat. He is mind controlled by Miranda rather easily. That leaves Jenny but I didn’t like her either. She really doesn’t give Miranda a fair chance. Yes, we know that Miranda is the villain from the opening scene but she has no reason to believe anything negative about the old lady. Yet from the start Jenny is antagonistic towards her and acts rather rude. It’s hard to find any scene where Jenny isn’t being mean to her.

The film has a lot of fun at Jenny’s expense that’s for sure. It’s all just done so drastically that she ends up being royally unlikable. I liked the investigator she hired except for when he suddenly fell for Miranda’s tricks. That was a low moment for him. At least he got the last laugh in the end I suppose.

We do actually get a real climax for the film though so that was pretty hype. There’s an actual magical battle filled with a building blowing up and both sides actually using their abilities. I wasn’t really expecting much action at all so I’ll certainly take this. The ending even leaves room for a sequel which would certainly be interesting. There’s always potential with witches and magical attacks, the film just needs to focus more on that and less on the homewrecking aspect next time.

Overall, Wicked Stepmother is a film that really does have a lot of good jokes but it’s not enough to distract you from the unlikable cast. Seeing Miranda/Priscilla seduce all of these guys without effort can be a bit much. Tone down the romance/affairs/fanservice and focus more on the actual comedy part of the film. More scenes with McIntosh would have done wonders for the film since he was actually on top of things. The scene of him quitting was pretty powerful and seeing more supporting characters would have been nice. There’s a lot of potential for interesting dynamics here but none of them ended up appearing. Maybe a reboot would have better luck.