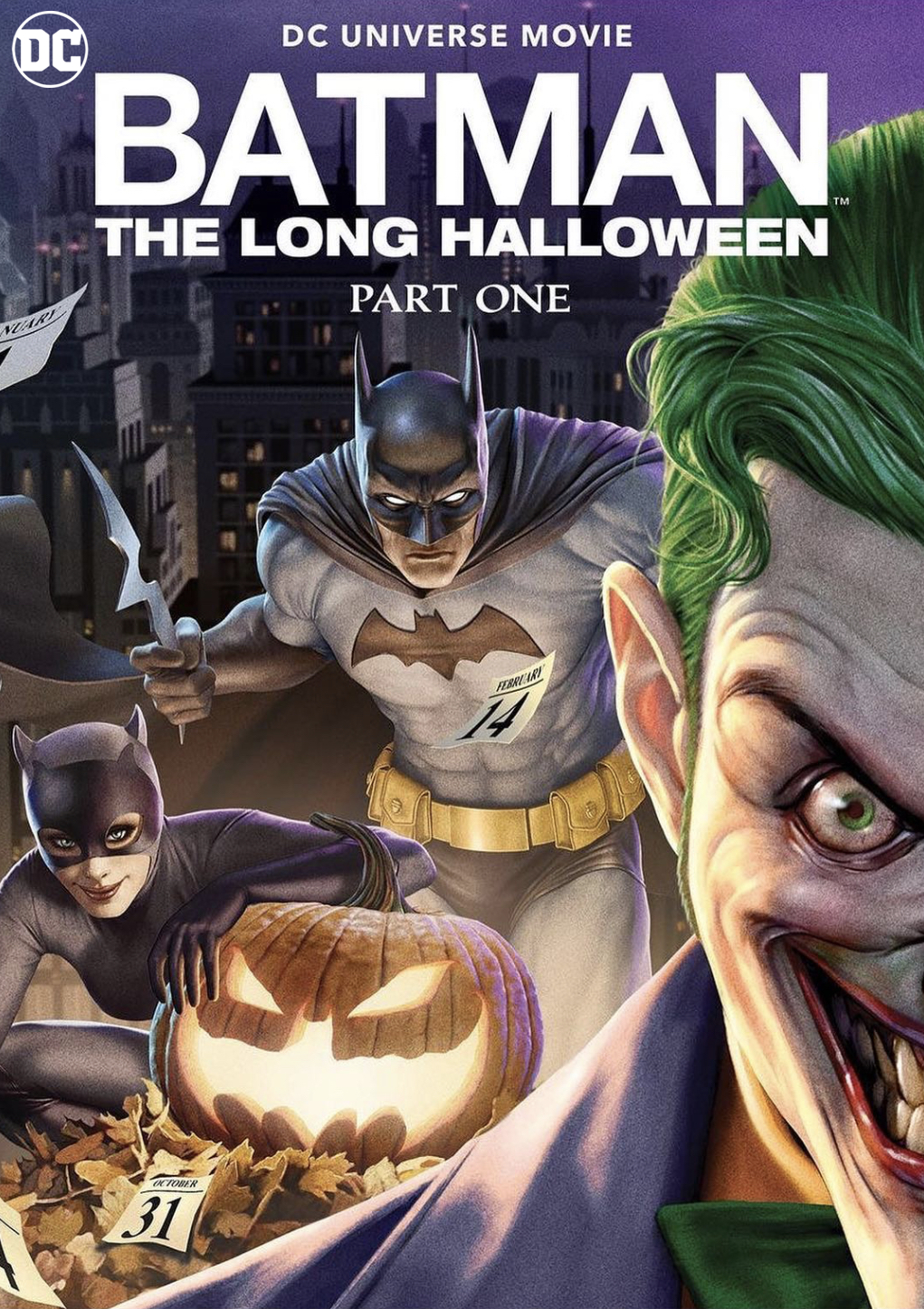 You always know a story has to be big when it gets adapted into a 2 part movie event. Not just any story can pull that off. Well, The Long Halloween is a story that just about every Batman fan has heard of so it’s pretty fitting. This one takes the franchise back to its detective roots and works pretty well. Definitely a strong Batman story you could recommend to anyone.

The movie starts with one of Carmine’s nephews being murdered on Halloween. The culprit left a jack-o lantern at the scene of the crime seemingly to taunt Carmine about this. Interestingly, this works out in Carmine’s favor since the guy was about to spill the beans on the whole mafia enterprise. Gordon calls in DA Harvey Dent as well as the Batman so the three of them can team up on this. They need to find the murderer but they also have to put the crime family away for good. This won’t be an easy mission but between the 3 of them they have a lot of energy. Batman is still in his younger days at this point and Harvey just became the DA. They all want to get some kind of win under their belt.

This isn’t going to be an overnight case though. This villain who has been dubbed Holiday has been murdering a different member of Carmine’s family or gang members on every big holiday. Unfortunately Batman and co. are never in time to stop him. Batman’s going to have to do some detective work to figure out who is behind this but the issue is that there are quite a lot of suspects. Sure, Holiday is murdering these suspects one by one but ideally Batman would like to catch him before they’re all dead. Will he be able to pull this off or is this one case that even the Dark Knight is not ready for?

First off, I definitely like the mystery vibe here. It feels like a reason long time since a mystery was the main plot of one of these films. I dare say that the last time may have been Under The Red Hood. You could make a case for Hush as well but I want to say that’s more on the action side. Although you could make that case for the Red Hood as well in which case we go back to Mystery of the Batwomen which did have the classic “Pick the right suspect” structure which makes sense as a mystery. Gotham is always a mysterious place where you would never want to live and the movie shows that off pretty well.

Batman also looks good here even if it is not one of his stronger appearances. A lot of the characters insult him like one of the mobsters who says he isn’t much of a detective and even Gordon criticizes him. At the end of the day he still makes a lot more progress than they do even if it’s with extensive help from Catwoman. Batman does well in narrowing down the suspects either way and he explores every avenue to stop the villains. He even meets up with the Calendar Man briefly. (That’s one guy I thought would have a much bigger role in the film)

Really Batman doesn’t let his guard down until the climax where he ends up getting punked twice but beyond that he did well here. At the end of the day he’s just a likable character as always and made sure not to do business with the mobsters. He makes it clear from the start that he’s going to do things by the book as Bruce Wayne and doesn’t cut any corners there. Gordon is one of the other big heroes here and he looks good. He is constrained a bit since he has to follow the rules more than Dent or Batman but he was the one to get the team together so he gets full credit for that. He’s always a very loyal ally for Batman and that’s important in a city like Gotham.

Harvey Dent gets a big role here and it’s always fun to see him in his career prior to becoming the famous Two Face. In basically every continuity including this one we see that he really was a great DA. Unfortunately you’re always just waiting for some acid to show up at some point for his origin. In Part 1 at least you feel bad for him though because the justice system in Gotham is just as corrupt as every other part of it. It seems like for every arrest that sticks, another few don’t. The gang have more connections than the super villains after all so nobody will testify against them. Still, he does his best each day.

His wife Gilda seems a lot more depressing in comparison. The film hints at a dark past here as she is permanently depressed and it doesn’t help that Harvey always has to run off on police business so they can’t be together for very long. It’s put a big strain on their relationship without a doubt. Speaking of relationships that aren’t working, Catwoman has a rather big role in this film. It seems like in this continuity she either began her career before Batman or just got good at it a bit quicker. She just knows more about the city and helps him out quite a bit but their careers are so different that they have to settle for just being allies. That’s always made the most sense anyway though.

Fans should certainly appreciate her role here. It’s got to be one of Catwoman’s most impressive appearances as she is strong and smart, a deadly combination for her adversaries. It’s also always fun to have more supervillains running around. It’s a bit of a loose term for her, but she is presumably still robbing people so she should count. The film is very grounded for the most part and that works well within the story but every time you see a costumed fighter it’s always a good thing.

The most random addition to the film is Solomon Grundy though. He feels extremely out of place and it’s not the kind of thing that would hurt the film or anything like that. You just wonder why he is here, you could take him out of both parts and nothing would really change to be honest. Then you have the Joker show up for the climax. He’s as crazy as ever and certainly elevates the threat to the next level. If you want to see the danger transition from being a street level threat to the whole city under fire, well Joker’s the guy for the job.

He’s clearly more dangerous than the mob so it’s good to see him getting his respect. Honestly the mob is only doing so well because every super villain is in jail at the moment. Otherwise it’s hard to see Carmine and his crew lasting very long at all. I may touch on this more in the part 2 review but it’s crazy to see how successful the mob is here. It sort of shows that if super villains weren’t around they would easily own the city without any real opposition.

As for Carmine himself, well he’s a fun mobster. I liked him as one of the big villains, he has an old school vibe to him. Picture any mobster/gangster from an old film and that’s the kind of guy he is. Carmine has absolute confidence in himself at all times and makes sure that the world doesn’t doubt how tough he is. Each of his scenes are interesting and it’s a good reflection of the film’s writing since whether it’s the heroes or villains on screen, you can always be sure of an entertaining scene.

When it comes to the animation style, this definitely doesn’t look as good as most of the older DC animated films like the New 52 ones or the films that came before that era. It’s definitely going for a different look but it just isn’t as colorful or detailed if you ask me. By the end of the film you’ll probably be used to it more or less but I would definitely be on board with a style that’s more eye catching. The one credit I’ll give the animation is that since it looks so much older than some of the other DC films, it does work to bring back that whole mob vibe.

The movie really flies by and has good pacing throughout. This is definitely a must for a mystery film and this movie nails it. There’s even a scene after the credits start which really leads in well to the next film. Lets just say one characters lets his guard down and then things go crazy. Now that’s a good way to build up hype for part 2. I’ve already seen Part 2 so you can bet that review will be up shortly.

Overall, Batman The Long Halloween may have a title that doesn’t really encompass the whole film but it does set the stage well (Would have called it Batman: The Long Year) since I saw this around Halloween. I don’t really have any negatives to say about the film aside from the animation not really being my style. It’s a strong adventure from start to finish and it maintains that pacing for the sequel. A whole show set with gangsters roaming the streets along with the villains would certainly be fun.