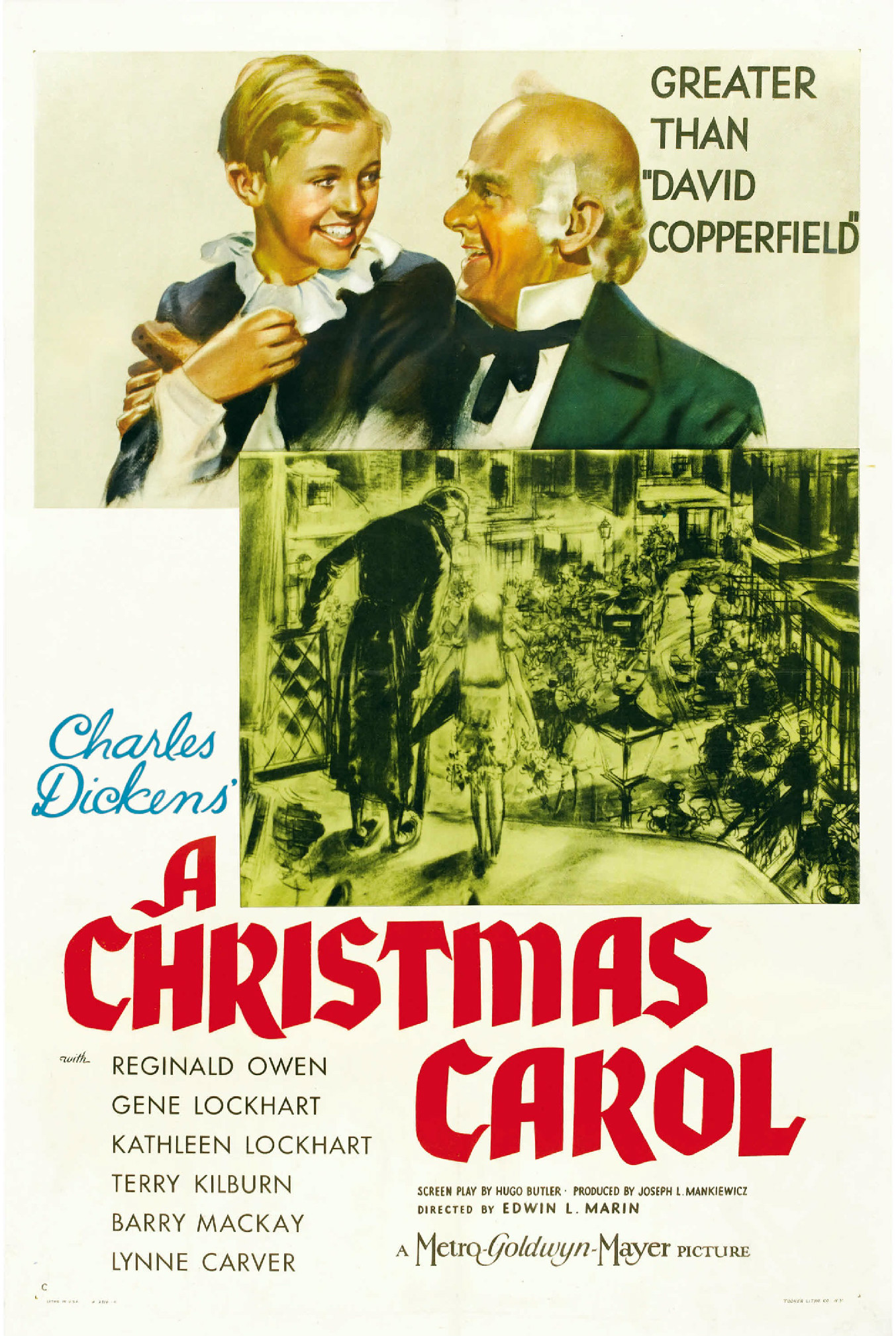 Time for another Christmas Carol adventure. This is one of the earlier ones from 1938 and is definitely still a classic. The story has aged well even if Scrooge himself can be a bit cheesy with the quick turnaround here. Of course he does have to turn good sooner or later so might as well have this occur early on. It’s easy to see why the story got so big as it’s a well rounded adventure.

The movie starts off with Fred getting ready to visit his Uncle Scrooge. Scrooge isn’t big on Christmas though and is still being rather rude to everyone. He has earned himself quite the reputation so everyone knows to avoid Scrooge. Fred is unable to convince Scrooge to come over for Christmas so he heads on home. Scrooge fired his assistant Bob on Christmas Eve which shows just how cruel he can be. Well, 3 ghosts have appeared and they are going to show Scrooge the past, present, and future in order to get him back into Christmas shape. Will Scrooge see the light or will he keep yelling Humbug?

The cast is fairly small here so each character gets a good amount of development. You can quickly see each of their personalities from the jump and that provides all the context you need for the story. Like Fred is instantly shown to be a really happy guy who loves Christmas. That’s who he is and makes for a great foil to Scrooge. It’s clear that Fred is someone who will be having a lot of fun all of the time and his family was certainly doing well too with their party.

Then you have Bob who is an honest worker and is just trying to make enough money to pay the bills. It seems like there aren’t a whole lot of jobs in this town given that the only option was to work for Scrooge. I would say Bob is extremely timid but when you absolutely need a job and there no union at the ready, it’s understandable that he would be walking on eggshells the whole time. It’s a shame that he had to get canned on Christmas Eve just for having a bit of fun.

As for Scrooge, well he is the ultimate Penny pincher. The guy is as rich as can be but he still doesn’t want to pay a living wage and won’t even put wood in the fireplace to keep it warm. Scrooge even goes as far as to completely shun the people trying to raise money for the poor. Scrooge is doing his best to play the role of the Grinch and ruin Christmas but that’s when the 3 ghosts come in. They try all of the routines, being nice, scaring Scrooge into submission, or even letting him feel like he’s in control.

Before the 3 ghosts though we do get to see good ole Marley. He’s always an interesting character because he was also a very successful businessman but someone who was also generous. Somehow Scrooge didn’t even know about this so I feel like Marley must have been exceptional at business for this not to have been apparent. Still, it didn’t go very well for him since he was in chains. Was he just not good enough? In a lot of Christmas Carol versions he was shown to be just as bad as Scrooge so it made sense why he was shacked and trying to tell Scrooge not to make the same mistakes. In this version he seemed decent from the start but maybe he was still stingy to an extent and that was his downfall. It’s a small thing but something to think about.

The first ghost is the nice one who shows him the past. She has good speed and reaction times with how she was able to teleport away from his grab in the end. From the 3 visions the first is never as strong as the other two since the first is about his childhood days. Not a lot going on there but we do see how he managed to push everyone away. If he had just gone to play with the other kids then it could have been all good but I don’t think that was possible for a kid his age.

Then we have the second ghost who is the father of many. He has a lot of fun mind controlling the people which is always a bit iffy. It’s why you rarely see heroes using mind control since even using it for the right reasons seems like a bit much. You’ll never know which characters are being good or mind controlled. Nice enough guy though and by this point Scrooge had totally bought in to the spirit of Christmas. You feel like the third ghost didn’t even need to appear but I guess you might as well go for the full combo at that point.

Finally we get to the last ghost who isn’t very talkative. It’s rather late by this point so the ghost probably wanted to get this done and head out. We see the bleak futures of what could be if Scrooge had stayed in his ways. He certainly would have left quite a lot of loss in his wake. It shows how powerfully rich he was in the end. With his fortune he could really make a difference in the town.

The Christmas Carol is a fun film with good pacing and writing. There aren’t any real weaknesses to the story so you should have a good time even if you have seen the story told many times before. In this particular version it felt like Scrooge turned good a little too quickly which would be my only note. It just made the third ghost feel a bit unnecessary which I don’t think was the intention. Usually you want all 3 to play a good role.

Overall, A Christmas Carol is as good a story as it ever was. You get to see what a town experience may have looked like so many years ago and the cast is enjoyable to watch. It would be quite exciting if you could visit your own past as a sort of “Greatest Hits” montage. I could probably go without seeing the future though to avoid any time loops. You never know what ripple effects you might end up creating which will just cause a whole lot of trouble. If you haven’t seen this one yet then it’s worth checking out. Of course there are so many different versions which are all usually solid so you don’t really have to watch this one in particular.