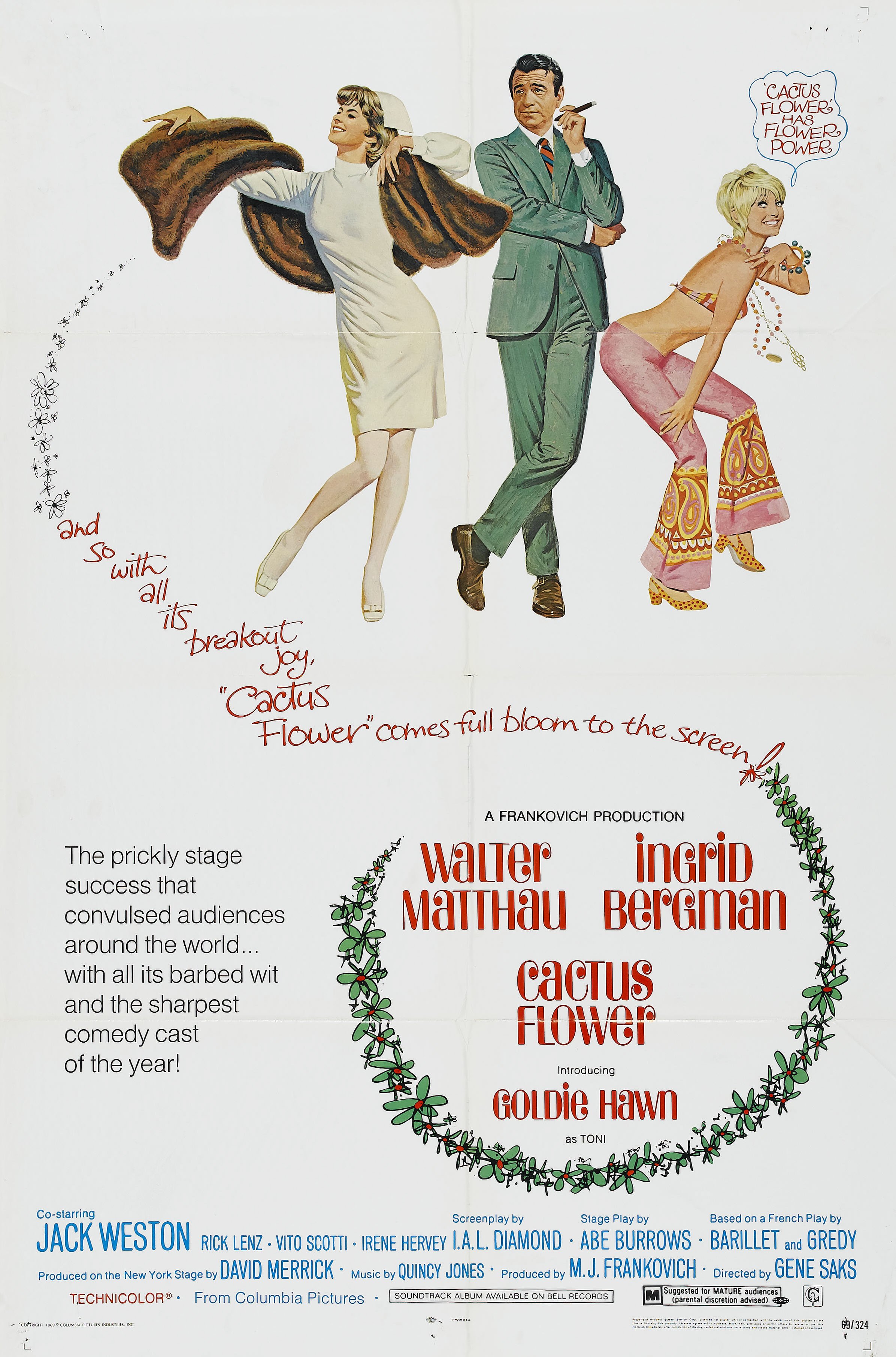 Cactus Flower is one of those movies where the main character really creates all of the trouble for himself. He’s not in the wrong place at the wrong time or anything like that. It’s his lies that turn a molehill into a mountain so it’s hard to feel bad for him at any point in the film. I don’t think the romance works very well and while some scenes are funny, others are not. There are more misses than things that work well in this film so ultimately I have to give it the thumbs down.

The movie starts with a girl named Toni deciding to commit suicide but she is rescued by Igor who decides to have a little fling with her in the process. Toni doesn’t seem to mind all that much and explains that she has decided to remove herself from the picture in the cheating affair she had with Julian. Julian receives her suicide note though and dashes over to see her. He convinces her that his wife doesn’t mind the affair and has even given her consent for a divorce. Toni finds this hard to believe and wants to meet this wife. Here’s the issue…Julian doesn’t have a wife. He decides he will have to get his dental assistant Stephanie to play the part but she isn’t thrilled about doing so. Is all of this really worth it to keep the relationship with Toni? Toni’s neighbor Igor is also suspicious of what’s going on and decides to step in.

This film starts to play out like a soap opera after a while with how complicated the circles are. Julian’s reason for lying to Toni about having a wife in the first place makes him look pretty bad too. Basically he told her that so that he wouldn’t have to marry her and they could just have the friends with benefits routine. Toni didn’t mind at first but clearly this got to her later on as you can tell from the opening scene. At this point Julian should have confessed but a big part of Toni’s character is that she doesn’t like liars so Julian chickens out yet again. The guy never really gets good at the whole honesty thing even through to the end. So you definitely don’t want to wind up with that guy.

So Toni likes Julian, Igor likes Toni, Stephanie likes Julian, and Julian likes Toni. Throw in a few supporting characters who will go out with any girl and you’ve got a regular circus going on here. Everyone’s certainly desperate for romance here except for Stephanie who tries to stay strong but 5 seconds into the movie and you probably know how this will play out. The romance angle is just very weak here and there is no relationship that you are rooting for.

Lets turn our attention to Stephanie for a second here who probably has the toughest ordeals in the movie. She has performed really well as an assistant for many years and has never failed in any tasks. It’s really a credit to her skills and she has a good home life. Well, one day Julian makes this crazy request for her to pretend to be his wife and she should have stuck to her guns and said no. By joining in she is basically lying herself and these things tend to come back to haunt her. Having to go on a fake date with Julian’s awful friend was another shot to her reputation and dignity. By the end of the film Stephanie basically cracks as she decides to have a wild night hanging out with a dicey crowd. Julian drove her to this so you don’t want to see them together in the end.

While Julian isn’t honest, you don’t like Toni either because she is having a relationship with the guy while she thinks he is married. No way you can get behind that. Even if Toni starts to feel guilty later on, it’s just too late. Her demands get more and more unreasonable though like after she meets Stephanie then she wants to meet the new boyfriend and things like that. All the while she seems like someone who will cheat on Julian without a second thought. Julian is correct to be suspicious of the next door neighbor Igor, that’s for sure. Toni is just way too annoying to be likable.

Then you have Igor who isn’t great either. I give him some more points than the others since he did save Toni’s life and tries to be a decent guy but his romance plot isn’t great either. He tries to look out for Toni but doesn’t exactly confess at any point and if anything makes her jealous by hanging out with Stephanie. He does get some of the best lines in the film though so by default I would consider him to be the best character here. It’s really not saying much but I like the confidence he has in his writing. He wants to write plays that are dignified and don’t rely on fanservice. It’s a good goal and hopefully he can achieve it.

There are some side characters but they’re all pretty bad like Julian’s friend who wants to have an affair with everyone and the one guy who’s always going after Stephanie even though he is married. I suppose you see some real characters while working at the Dentist. I’ve just seen way better romantic comedies in my day. You can survive while having a bad romance if the comedy is really good, but I wouldn’t say it is exceptional or anything like that. It has some fun moments but what comedy doesn’t? Most of the jokes don’t land very well and that hurts. Any scene of Stephanie having to survive her dates and try not to run out is more tragic than funny. She went too far in trying to help Julian and just should have let him sink instead.

Julian just kept getting worse and worse as the film went on. There’s one point where he starts to lecture Stephanie on how she isn’t feminine and how she is limiting her world view while they are driving back. This is after she has put her reputation on the line to help him out and she has been a great worker for many years. The entire speech just made absolutely no sense. Not only was Julian incorrect in each of his assumptions but it just made him look like a grade 1 jerk. Talk about having no gratitude for what she had done for him. Julian forgot it all in an instant.

Overall, Cactus Flower is a weak comedy. It’s hard to find any character to root for here and the style of comedy just ended up missing a lot. The romance is rather poor and while the dialogue can be good, it wasn’t enough to save the movie in this case. It does go by fast though, I can tell you that. The movie doesn’t drag on and a whole lot happens before the movie ends. So I can at least say that the pacing is good which is a small silver lining at least. Perhaps a remake could handle the film better as the plot of a close friend pretending to be the wife or girlfriend can work at times. You just have to have a really good setup and likable characters. This one forgot those key steps.