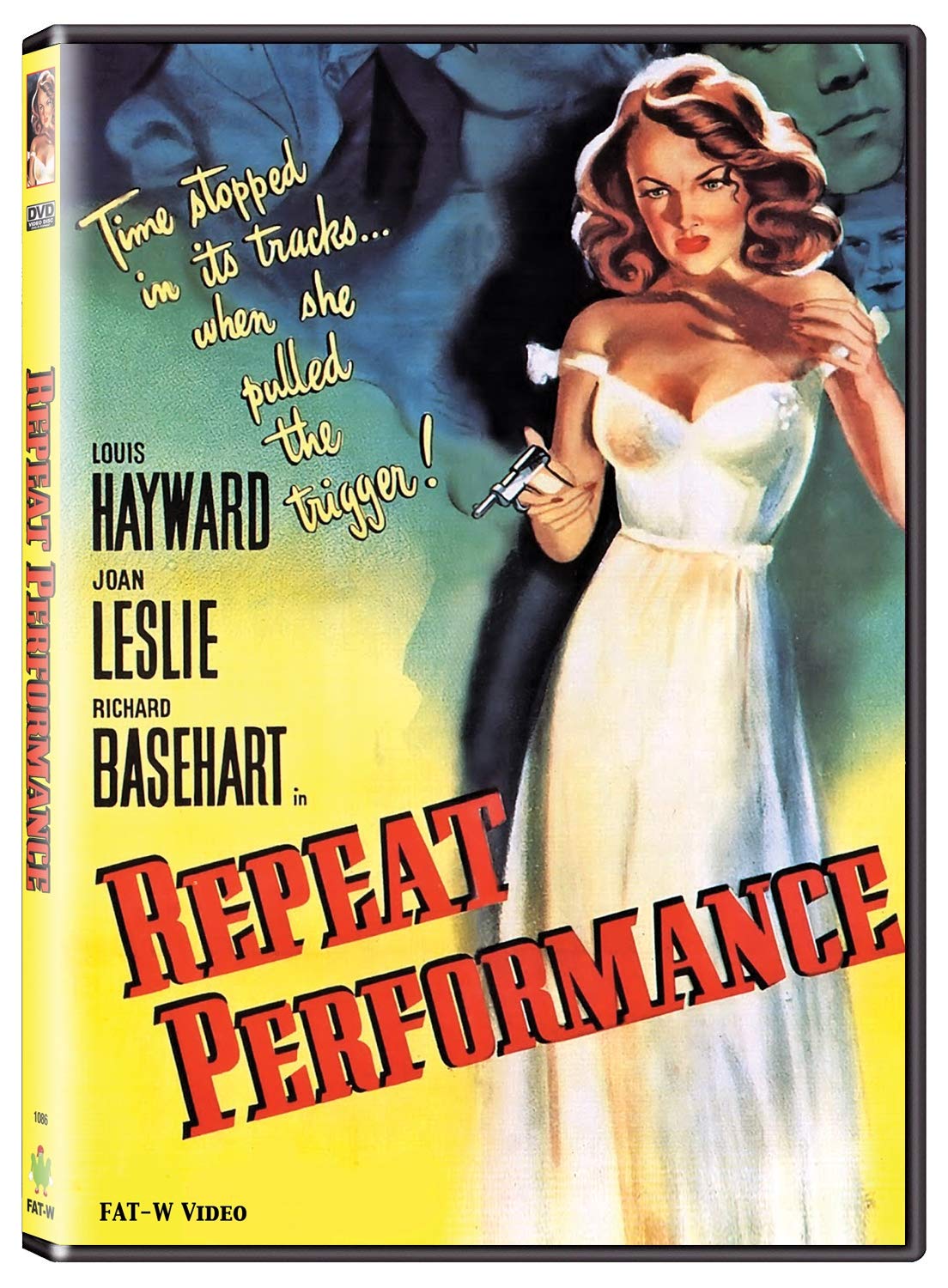 Repeat Performance involves time travel which is always hype. That said, throughout the film you are questioning the point of even trying to have a do-over. You’ll see what I mean when I talk about the plot but it feels like the main heroine absolutely ruined her second chance since she didn’t get to do anything with it. If she could have one more do-over I bet she would take it. This time she could really change things.

The movie starts off with Sheila destroying her husband and heading downstairs to try and explain to her friends how dreadful the situation is. She wishes that she could do this over again. Fortunately she has the right day as the year turns into the next one as New Year’s wraps up. This allows her to wrap back one full year. This time she can have things play out differently so she doesn’t shoot her husband in the end. Will she be able to defy “Destiny” or is this going to be game over for her?

We learn more about why she shot the husband as this goes on. See, her husband is a guy named Barney who is an alcoholic and he seems determined to cheat on Sheila with someone. Enter Paula. She’s a rich neighbor/writer who seduces Barney in every timeline. Although it’s less her seducing him and more like he fell for her instantly. Sheila shot him in the old timeline after this happened so she figures she will keep them from meeting this time around. That proves difficult though and even going to another state doesn’t stop Barney. What else can she do?

Well if you ask me the first step would have been to have parted ways with the guy. Barney is introduced as a terrible character right from the jump. It’s not like he’s a good character who slowly got corrupted. He is drinking himself drunk immediately as the film starts. He doesn’t seem to love Sheila at all and loses his temper with her several times. There is absolutely no reason to stay with him, particularly when they go to another state and all he can talk about is beer and girls. He makes no attempt to hang out with Sheila or try to enjoy himself. So throughout the movie he is doing his best to cheat on her and we have to root for Sheila to win him over?

That’s a bit backwards if you ask me. Sheila should have used the year to just get away from him. Now we don’t know exactly how things played out in the original timeline but we can assume that he was the same kind of guy. So it’s not like he was ever likable and so Sheila needed to cut him out of her life. It can be annoying seeing her try to please him the whole time while he just couldn’t care less about her. He’s just an awful character.

Sheila also looks bad in not planning things out well for the end of the day though. Considering her knowledge of the future, she should have been anywhere but in her room at midnight. When you know how things will play out, it’s absolutely awful for you to put yourself in the same exact situation. The film uses this as an excuse to say that it’s all destiny and there’s no escape but I don’t buy into that. In any universe where time travel is possible, I take that to mean that you can change the future. The two elements go hand in hand after all.

Sheila has a few good friends at least. John does his best to take Sheila’s side and try to keep Barney out of it. He doesn’t like Barney and with good reason but unfortunately there is only so much he can do. Unless Sheila turns Barney away, he will always be the last person she sees and the first one that Sheila talks too. You can’t really stop his influence entirely on your own. Likewise, William’s another good friend who has Sheila’s back. He really does his best to protect her when needed and he has the best final scene in the film. The guy really did well and is an example of a character who used his knowledge of the timelines well. That’s the kind of guy you want to have in your corner.

So the premise of the film is interesting and I liked the script. The characters all have a distinguished way of speaking as you would expect in the old days. Most of the characters are interesting and I was glad that Sheila at least has some friends that she can count on. The main issue here comes down to the fact that the romance is toxic from the start though. You can’t root for Sheila to succeed because under no circumstances do you want the two of them to be together again. Barney just isn’t a good fit for her or for anyone really as he just rebounds and goes after any girl he can. The guy’s not trust worthy at all and has a bad attitude from the start.

Overall, this plot ends up hurting the whole film because it is the entire purpose of the journey. It’s hard to root for a main character when their goal’s no good and that’s exactly the case here. If only Barney could have at least been a decent guy who just slowly got worse and worse each time. At least then you could see why Sheila was fighting for him so hard. In the end I also didn’t agree with the film on how time could not be changes. Make no mistake, if you can travel through time then it can all be changes because nothing can stop you from putting things on a new path. It really comes down to the character making big mistakes if everything ends up playing out in the same way. For example I still can’t defend Sheila going back to her room when she knew what was about to happen. I’d like to see a sequel of this where she gets one more chance to change things. It would just be fun to see her take a more drastic approach to all of this as she ditched Barney. If you want to check out an old school romance, you could do a lot better than this film.