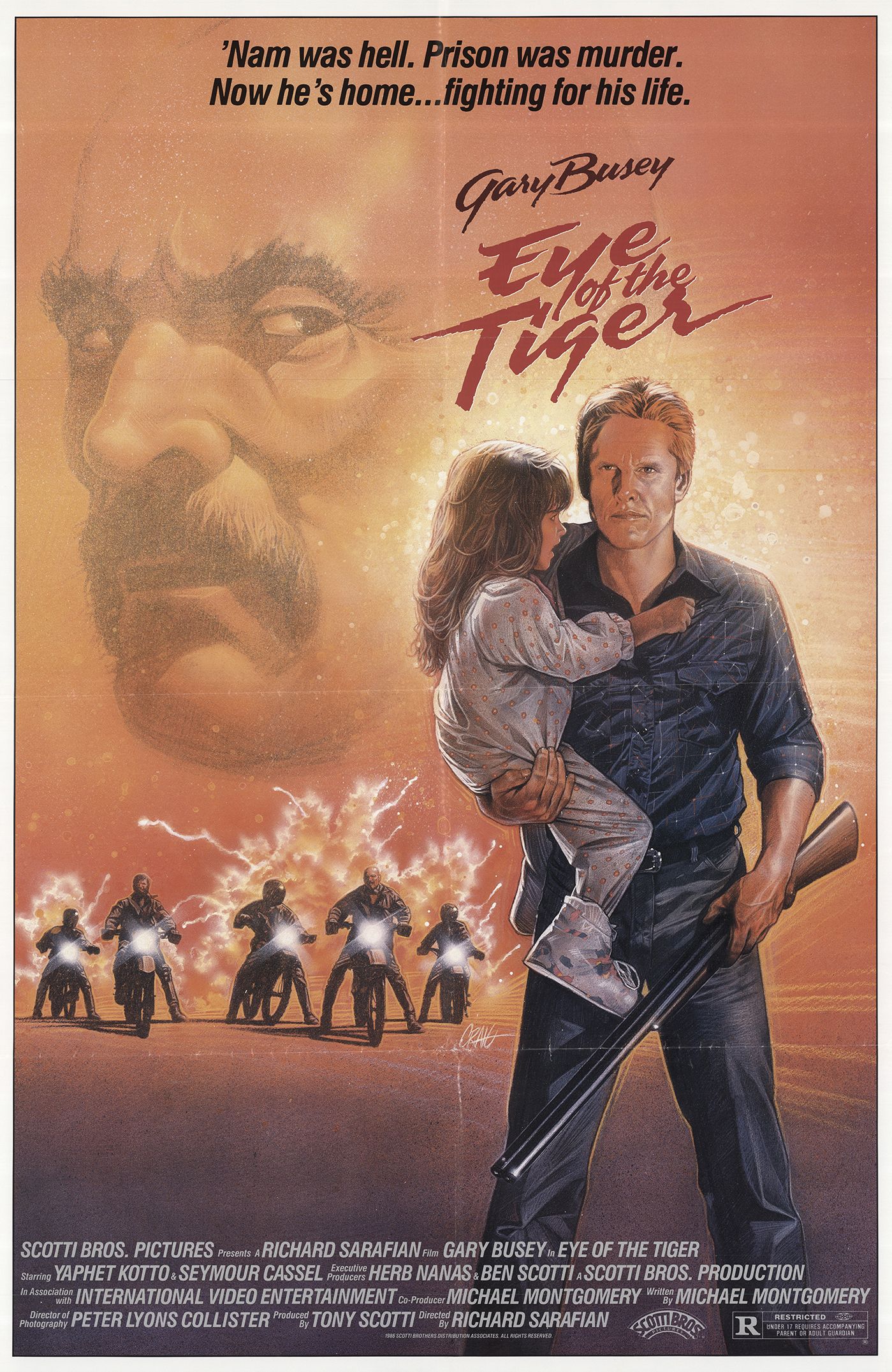 Eye of the Tiger is definitely one of those films that gives revenge titles a bad name. I mean, it’s probably not a genre you want to see a whole lot of anyway as it’s difficult to succeed in so many attempts would fail but this one just never stood a chance. It puts the main character in a rough environment where everyone is evil or mean and so by the time Buck gets his revenge, there isn’t a lot left to fight for. That’s usually the downfall with revenge films, at least this one has a good soundtrack though even if the timing is often pretty bad.

The movie starts with Buck finally getting out of jail. He made some friends in there but it’s time to head home. Unfortunately his small town is even worse off than usual. The place is run by a corrupt sheriff who is in league with gangs that go around assaulting everyone and forcing people to live in a life of fear. Nobody has ever risen up to do anything about this and they all just look the other way. Well, Buck isn’t going to do that and he foils one of the gang’s attacks. They retaliate and murder Buck’s wife while also putting his daughter in the hospital. Buck aims to take them all down now but to do so he will need a lot of weapons. Additionally he will also have to go up against the cops who are in the pocket of the gang.

In this movie it’s nearly everyone teaming up against Buck. The only person on Buck’s side is his old friend J.B. and even then that guy usually just warns Buck not to fight against the villains since he thinks the lead will lose. Buck doesn’t like backing down though so he plans to fight either way. He has some good equipment and plans like when he stretches a wire across the street to take one villain down. The problem is that he has to beat a lot of them and quickly or they just run to the police to have Buck arrested. As the film goes on Buck starts carrying his gun at all times which is a good idea. At least with that he always has a fighting chance.

Buck definitely should have left with the family as soon as he got back though. I don’t think your life can ever be all that easy if the cops have it out for you. We know that the Sheriff is willing to go quite far to mess with Buck right from the start given that he was put into jail on account of that guy. So just leave the place and start roots somewhere else. That’s absolutely the best thing to do and the only way to get out of this cycle. By the time Buck decides to go it’s unfortunately too late. So the rest of the film will be bitter sweet at best since his wife isn’t around anymore.

I’ll still give Buck props as a main character because he stands up to the gang and does what’s right. It would have been easy to have just walked away or ignored what they were doing but he didn’t do any of that. So definitely some credit there. He also does well in the fights even through to the end when he takes on the leader of the gang. Buck doesn’t go down easy and never loses a true 1 on 1 fight in the movie. The guy just keeps going forward and landing hits until he can’t anymore.

As mentioned, Buck’s friend J.B. takes a long while to actually step in and help though. It’s understandable why he doesn’t want to get mixed up in any of this but it does mean that I’m probably not going to be rooting for him a whole lot. If Buck had some help sooner the film could have potentially been over a lot quicker. The rest of the police officers all look terrible as they work for the corrupt sheriff. The whole town is complicit to an extent as they all look the other way and allow him to stay in control. It’s no wonder that the village is under such tough times. There’s nobody there who is willing to fight back against the villains.

One area that holds the film back big time is how gritty the whole thing is. It’s got Mad Max vibes from the start with the gang going around and attacking people. If they were just murdering people then that’d be one thing but of course they’re all going after the women and piling on the crimes. It’s always a bad way to build up tension in these films, having the villains just be murderers is good enough to show why they need to be stopped. No reason to go any further than that. The extra details are what puts the film in the red right away and it’s hard to get out from there.

Then as I mentioned the music timing is always very off. It is nice to hear the Eye of the Tiger song since that one’s always filled with energy. This film has some good heroic themes as well. The issue is that they will play right after a tragic scene or during one. It’s like the film’s trying to say this is a happy moment even while the heroes are still taking hits. The timing was never quite right and it’s hard to get into the music and experience the hype/fun that’s going on because you know that the moment just isn’t happy yet. The only time the song works is the very last time it plays because that’s after the big battle and so it makes sense to celebrate. The other attempts fell flat.

Overall, Eye of the Tiger is a film I would avoid. It’s a classic revenge film through and through where Buck is put through the wringer so you can get some satisfaction when he inevitably caches the villains. The reason why this genre is tough is because it’s easy to make things go too far in how much the villains are winning so it’s just hollow even when the lead gets his revenge. I don’t think the wife needed to die here and additionally the gang could have just been about getting rich and murdering people. It would be a lot less dark and would help the film as a whole. In the end, you should definitely watch Taken instead if you want a better revenge film.