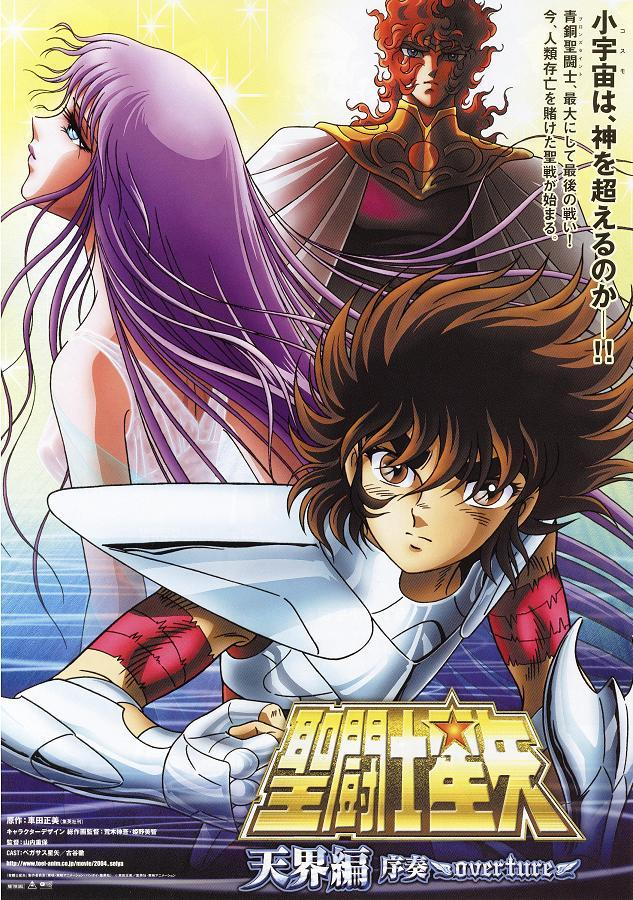 After all these years it’s time to check out the original sequel to the Saint Seiya manga/anime. After the big battle with Hades, Seiya was greatly injured and this movie explores just how bad those injuries were since the manga just ended immediately so we didn’t know exactly how this played out. I am glad that he gets up sooner than later though as writing Seiya out for the movie would not have been a great move. The film’s definitely a lot of fun, I wouldn’t go as far as to say it’s the best Seiya movie but it’s cool to see another original adventure and the ending’s definitely hype.

The movie starts with showing Seiya in a wheelchair and he is completely despondent. He has lost his ability to use his abilities and can’t even walk. One day, a group of fighters show up to assassinate him. These are angels led by Artemis. The gods have decided that Seiya and the other saints must be punished for taking out 3 gods during the Hades arc. Athena doesn’t like this but as always she chickens out and goes along with the villains. After meekly handing over her throne and saints, Athena is gone and Seiya is fortunately able to get up. He has to find Athena and take down Artemis and her troops. Can he pull this off now that he is truly back to being a bronze saint? (Even weaker than one to be honest) Also, where are his fellow Saints when he needs them?

If you can’t tell, I was not a fan of Athena at all here. Once again she is betraying Seiya….why? By now you’ve got to trust him since he has saved the day so many times. This is one main thing I would hold against the film which is that everyone’s betraying Seiya again. Aside from Athena you also have the other bronze and silver saints beating him up. Seiya really can’t catch a break and as always he’s got to do everything by himself. It would be nice if everyone could have his back for a change.

Athena in particular has to get the more criticism though. She saw what the Saints did against Hades previously. She should have confidence that they can beat Artemis and whatever army of gods are behind her. Just summon the Saints and announce a full war against them. Otherwise you lose any kind of turf advantage and Athena handing over her staff was not a good move. She’s just lucky that Artemis allowed her to take it back later on.

The other Bronze Saints like Unicorn do look bad here though. Come on now, you’re that eager to start working for Artemis now? A true Saint never stops their allegiance so calling this Artemis’ temple now and things like that make them look bad. I also thought Marin and Shaina looked really bad for going along with this. Enough about those Saints though, Seiya himself looks great which is good. He’s determined as always. Seiya knows how to take a beating, every enemy has the advantage at first and that’s true here as well. Initially he takes a lot of hits but that’s because he’s so weakened.

I can see why this nerf was necessary because otherwise Seiya was stronger than the gods by the end of the series. It should be easy for him to utterly dismantle all of the Angels and take down Artemis. The only opponent worthy of him would be Apollo and even then my money would be on Seiya. Because of this though I have no power level issues with Seiya’s fights. It all makes sense given what we know about his situation.

I do have some power level issues with the rest of the Saints though. Ikki, Hyoga, Shiryu, and Andromeda should all be close to Seiya’s level. Not quite as strong of course but strong enough to be taking these guys down for the count. Instead Hyoga and Shiryu are initially knocked out off screen and then Ikki and Andromeda are having a tough time winning a 2 v 1 against one of the opponents. They don’t have their gold armor at the ready this time (although I’d make the case that they should be able to awaken it with their burning spirit) but they should still be winning these fights. Only Apollo should be able to take them out at this point.

Still, it is nice to see these guys. Their role is very small but at least they all have an action scene which is good. Based on how the film starts to end, I do think they would have done a lot more in the sequel though. It’s a shame that this couldn’t have continued though. Even if we have a different timeline, just have some branching paths. It may not be canon or something but it’d still be nice to see. Or go the Fate route where you have 3 initial paths and then like 5-8 branching futures. The more expansive the franchise the better after all.

The animation here is really solid and I would agree with anyone who says that this is the best that the series has looked. The animation is really solid and this feels like a true theater experience. The colors are sharp and the backgrounds have a whole lot of detail to them. The fight scenes are also on point as well and it’s always fun to see Seiya’s classic Meteor Fist with the accompanying sound effect. The soundtrack is also good here. We get a nice song at the end and the classic fighting tunes are always good. The movie definitely delivers here.

On the other hand, the film’s only real weakness comes in part from the animation although it might not be related. At times the film tries a little too hard to be super grand and emotional. We get lingering shots at the water as it splashes or the moon in the sky. Characters will intently stand in the distance and it did make the pacing feel a little slow at the start. Everything’s just so dramatic and I think it gets to be a little too overdone at some points. Of course this isn’t the kind of thing that would hurt the film’s score but you tend to see this in films where they are really proud of the animation. Happens a lot in Pokemon as we stare at the grass blades twirling in the wind.

The film can also be a little cheeky with mild fanservice when Shaina and Marin are fighting. Could just be more dramatic shots that the movie is going for and since we see that for the environment, it’s possible that it just extends to the characters too. Nothing quite like the obvious camera angles you’d see in SAO though so it’s super mild at best. Saint Seiya is a franchise that really doesn’t have much fanservice in general and has always stayed strong there.

So we’ve talked about the heroes and how Seiya steals the show here. (Ikki’s role is just too small for him to take center stage this time. It was nice to see him and Andromeda teaming up as equals though. It shows some really good character development for Andromeda at this point) Now lets talk about the villains. Artemis is like Pandora in that she acts a lot more like how you would expect the evil god to be. She isn’t afraid to go on the battle field and talk tough to the heroes. I liked her well enough as one of the villains.

Then you have the Angels. From the 3, only the one who fights Seiya really gets a role. The other two look tough and talk tough but they’re obliterated in short order. The angel who fought Seiya actually got a twist involving Marin though and got a lot of moments to himself. He made for a good villain. Not good enough where I’d remember his name though although I could swear that they just called him “Angel” each time while the other two had true names. Either way he made for a good villain.

Finally you have Apollo who shows up at the end. He talks tough and backs it up with how he looks there. My money would still be on Seiya to beat him if he was at full power, but as discussed that wasn’t the case this time. Apollo works as a good final boss and I’d like to see where he stacks up with the rest of the gods who are so upset at this state of affairs. Seiya does land a good hit but it doesn’t seem likely that he would get a chance to win until the sequels. Apollo’s appearance is extremely brief as the film just ends but he makes the most of it.

I should mention the Gold Saints have a quick cameo here but they are quickly discarded as the gods have the last laugh. I would have liked to have seen them fight a bit or something but I guess there wasn’t much they could do there. It was a fun little cameo but at the same time it feels like they didn’t get to do anything. At least have them send the heroes some gold armor or something, that would have been cool. It’s been a rough road for the gold saints over the last few arcs….actually for the whole series to be honest.

As for the ending, it’s intentionally vague but here’s my take on it. Apollo decided to neutralize Seiya as a threat by erasing his memory along with Athena’s after defeating them. That’s why they’re now in a flower field just hanging out. It means the other Saints are going to have to hurry but it’s a fair bet to say there’s a slight time skip before the final scene so I wouldn’t be surprised if the rest of the Saints were already defeated as well. In the second film I’d expect to see the 5 Saints battling 5 gods or something like that. The more I think about a possible sequel, the more hyped I get.

Overall, Heaven’s Overture is a great film. We’ve got all the hype action you could want and a great cast of characters. The animation is excellent and there’s always something going on. The film can be a bit dramatic but I can appreciate the boldness of nerfing Seiya for a while. It’s better than just having these guys wreck him, now that would have been iffy. Maybe if we’re lucky we’ll get a novel continuation or something at some point. Either way if you’re a Saint Seiya fan then you’ll want to check this one out at some point. It’s a nice look at a possible future path.