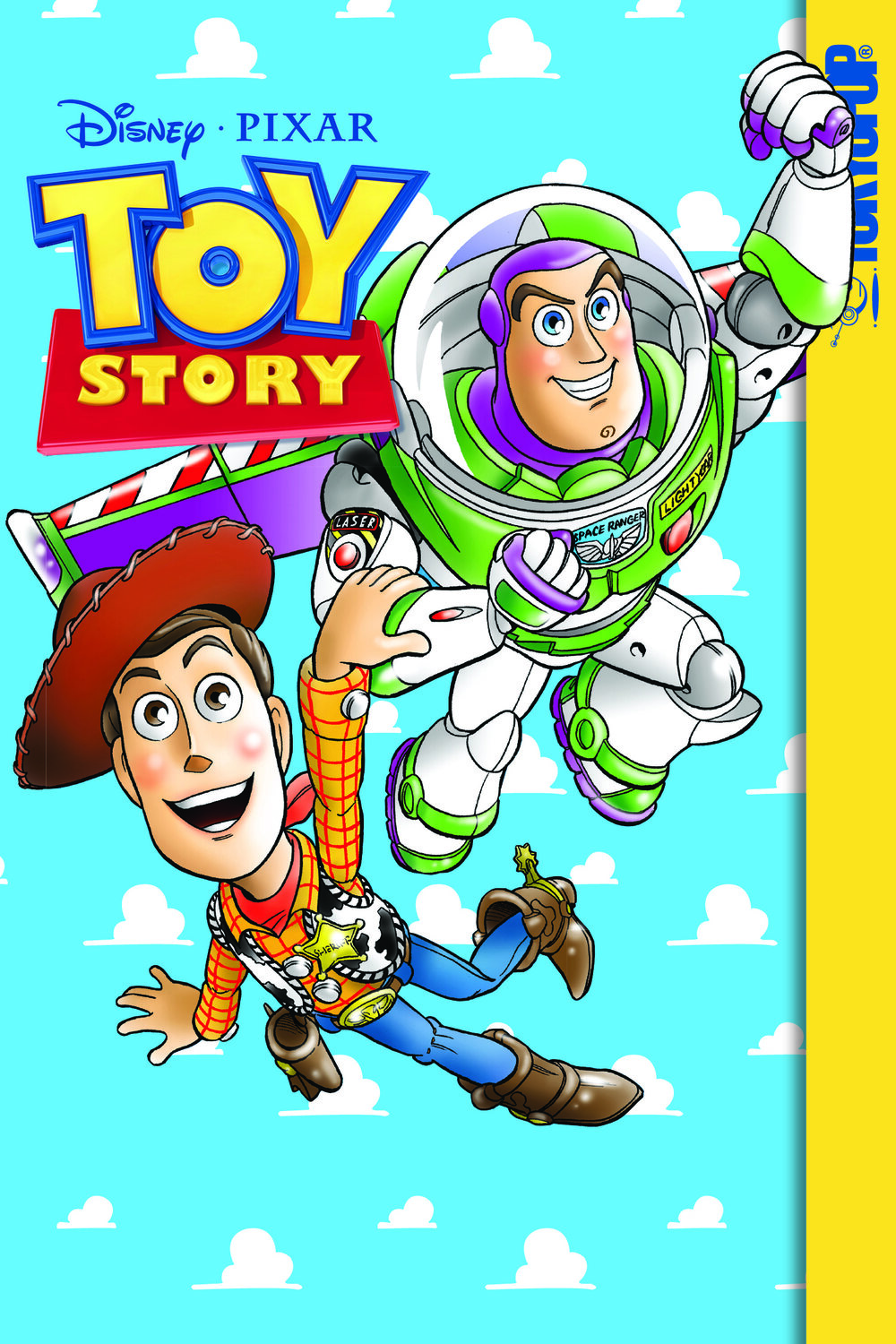 It’s time to take a look at the manga adaption of Toy Story. It’s pretty fun to relive the film as a manga. This always seems like a good idea for someone who has no time to watch the movie or in general for manga readers to check out and then be inspired to watch the movie. I’d say the manga does a good job of adapting all of the events. Of course if you can only pick one way to experience the story then I’d probably say to go for the movie but all in all it’s a pretty enjoyable experience.

The story starts with Andy getting a new toy so all of his existing ones are very nervous. Up until now Woody has always been Andy’s favorite toy but what if that changes? Well, the odds of his fears coming true seem high as Andy’s new toy is Buzz Lightyear. The hottest toy on the market and this guy has a lot of cool gadgets like a button that has some snappy voice recordings and he can even glides thanks to his wings. That’s an awful lot for Woody to compete with. One day Buzz ends up falling out of the house and it seems like Woody may have done this intentionally so he has to bring Buzz back to clear his name. Can he pull this off or are the other toys going to forever think that Woody is very petty?

Describing the plot for a quick adventure is always tricky because you have to think about what the perfect cut off point is. I think that’s a fair description personally even if the story does change quite a bit as it goes on. You definitely understand why Woody is so jealous although at the same time it really doesn’t look great for his character. The guy doesn’t have much confidence to be intimidated like this on day 1. You’d expect him to hold down the fort for a week or so at least but playing with Andy is just too important to him. Woody would ultimately continue to improve as a character in the future films but just by this adventure you would probably put Buzz as the MVP.

He is a fun character after all. Buzz may not realize that he is a toy but partially due to that he does have a ton of confidence. There is no challenge that Buzz doesn’t think he can tackle and he does help the other toys out when they’re in a jam. The next door neighbor makes for a fairly imposing threat since the guy is absolutely brutal when it comes to the toys. It’s really fortunate that the toys don’t seem to properly feel pain like most beings because otherwise that would be really rough for them. It seems more like they just find the sensations odd at most like then the guy merges different toys together.

To think, if Buzz didn’t show up then Woody and friends might never have made a move against him. So Buzz was definitely a net positive for the whole team at large. I’d also say he gives us the best humor moments throughout the volume although Woody deserves credit there as well since the dynamic between the two of them is really part of the selling point for Toy Story in general. The other toys are nice enough like the Piggybank and Bo Peep but their role here is fairly minimal. After all the volume has to go through the events rather quickly so if you aren’t one of the main two then you’re basically out of luck.

As for the art, it’s fairly good. Nothing spectacular or anything as it’s really just going through the motions. It’s always very clear so you know what’s going on. You definitely would not say that the art ever gets cluttered or anything like that. The artist has fun with the expressions and the whole time you do feel like it all looks appropriate based on how the film was. So I don’t really have any issues there, it accomplishes what it set out to do.

The story is also fun enough like with the movie. It’s a pretty interesting concept about how the toys are alive. Naturally you’ll have a lot of questions about this because the implications are huge. Of course you’ll have to think about that on your own since this manga isn’t about to get into all of that. There’s really just not enough time for it but I’ll always give the film credit for really putting in a unique concept here. Perhaps the toys should go around from door to door to rescue other toys and make sure they’re all being taken care of. I suppose the world of Toy Story is likely a pleasant one but just like how they had a mean next door neighbor, I wouldn’t be surprised if other people are being mean to their toys. You could probably do a whole spinoff series about the toys trying to save everyone.

Overall, There isn’t a ton to say about this one. In part because I already reviewed the movie and also in part because it’s just so short. The volume is fairly small and it’s not like there’s a huge cast or anything. There’s no big topic that I have to spend a few paragraphs discussing or some kind of subplot I want to address. It’s a fairly straight forward adventure from start to finish and one that is executed well enough. It’s like a quietly good story that you had fun with. It wasn’t super or anything but you didn’t really have any big issues with it. That’s how I see the Toy Story manga. I probably wouldn’t read it again but it wasn’t bad or boring. It kept my attention and had good characters so you can’t really go wrong there. In the back of your mind though you can’t help but compare it to the movie the whole time though.