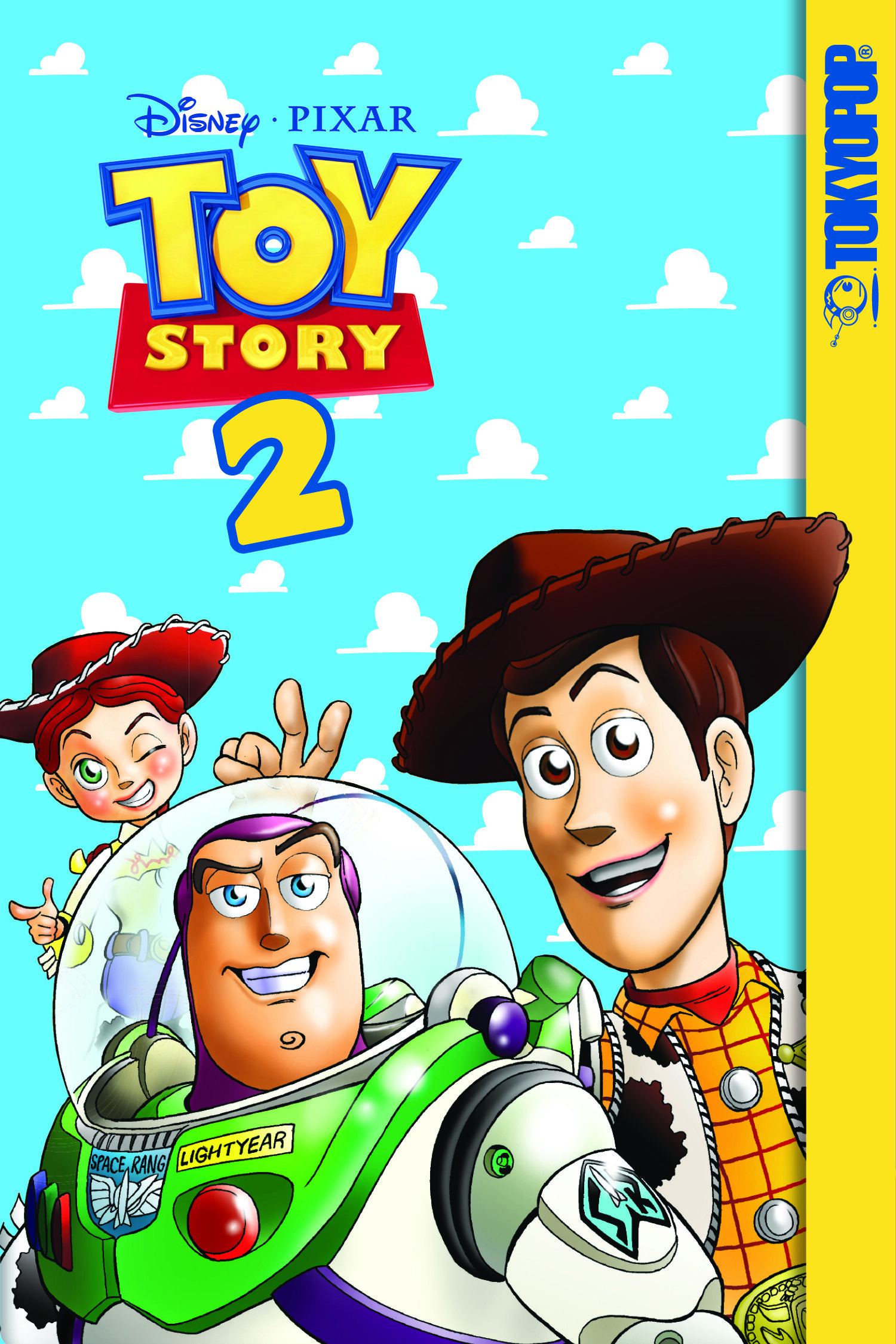 It’s time to look at the manga version for the sequel. Much like the first one, the manga for Toy Story 2 does a good job of adapting everything and tying the story together well. The art is still clear and the writing is good even if the editor needs to check the text more closely for a proofread. It’s always good to see some new characters here like how we got Jessie into the mix. That definitely helps widen the character roster and I always thought she was a fun character. So you’ve got another quality character into the mix.

Things are finally going well enough with the toys when the manga starts off. They’re all getting along now while Woody and Buzz have become best friends. Unfortunately Woody is getting older now and is more prone to breaking. One day a collector happens to see Woody outside and figures that he can make big bucks by completing his Wild West set. So he steals Woody and now Buzz and the others have to find the guy before it’s too late. Meanwhile Woody meets the Prospector and Jessie, the two toys that he goes along with in the set. They really want him to stay because then they can all live forever in the museum. It is a rather tempting offer for the main character. Should he go with them or stay with his old friends?

This story has a bit more of a sense of danger about it thanks to the involvement of the Prospector. He makes for a solid villain because the guy is absolutely crazy with how badly he wants to be in the museum. It’s also more of a personal threat than the human because this time it’s a toy trying to mess Woody up. Woody isn’t exactly much of a fighter either so you can’t see him fighting the guy off without the team. If only he had chosen the old toys a little sooner, then he may have ended up getting out easier.

Woody is conflicted for parts of the manga and that makes sense to a degree. That said, I can’t imagine anyone being happy being trapped in glass at the museum for all eternity. If the case is secure he won’t even be able to move around. So he can talk but imagine not being able to move for the rest of your life? Now that would have to be really hard to deal with after a while. Don’t underestimate just how long a period of time the rest of his life would be. So if I’m Woody I still would have been going back with the main characters right away.

Meanwhile Buzz is the one who really has all of the answers in his sub plot but unfortunately for him he is taken out pretty early. The scene where he is stuffed in the toy box is pretty emotional because there was definitely a chance that he might not have gotten out. It was a nice excuse to see more of the classic Buzz though who still thinks that he is a toy. The fight with Zurg may be a bit on the anti climactic side but since they’re both toys that does make sense. It’s not like they could suddenly develop powers or anything.

Jessie also gets her character arc here as she was nervous the whole time about not being played with or being abandoned again. She’s already had a rough ride as it was but fortunately things work out for her. She adds to the character dynamics within the roster and will stay on as a good character for future movies. The Prospector is out of options but that’s what he gets for turning evil right?

Toy Story 2 does a good job of keeping in what made the first film good and then upping the ante with the stakes and villains. Seeing all of the toys getting along is also good since it shows how far we’ve come from the days where Woody and Buzz would fight all the time. It’s definitely been a long time since then and the toys need to stick together after all. Considering all the dangers out there, teamwork is really what keeps them together. Buzz deserves most of the credit for the gang being able to find Woody in the first place.

The art is also good like in the first one. Not amazing or anything but it’s all clear and the character designs are on point so you can’t ask for much more than that. For these adaptions I find that the art is usually clear and not too detailed or it tries too hard with the details and gets very messy. If I had to choose between the two options then I would certainly go with the former. You’ll end up blasting through this adventure really quickly that’s for sure.

While he’s not the main villain, I did like the toy collector though. He’s the kind of villain you can have fun with because at the end of the day he’s trying to get rich. It’s a classic motivation and from his perspective he’s stealing a broken toy and turning it into thousands. That’s quite crazy when you think about it. Even if this is what you would call a “petty” crime of course you are still hoping the heroes stop him. It’s so petty that it goes across the bend into being humorous though which is what really makes this villain work in the story.

Overall, Toy Story 2 is a good story. Like with the first manga adaption you still feel like it can’t quite match up to the film but all in all it does a good job of translating this over to the manga format. If you haven’t seen the film yet or are torn on if you should see it, then you’ll want to check this manga out. It’ll give you a good idea of the story and adapts all of the big moments but then you can always watch the movie afterwards if you liked this one. It could be a little while before I’m back into the Toy Story world so this is a good send off in the meantime.