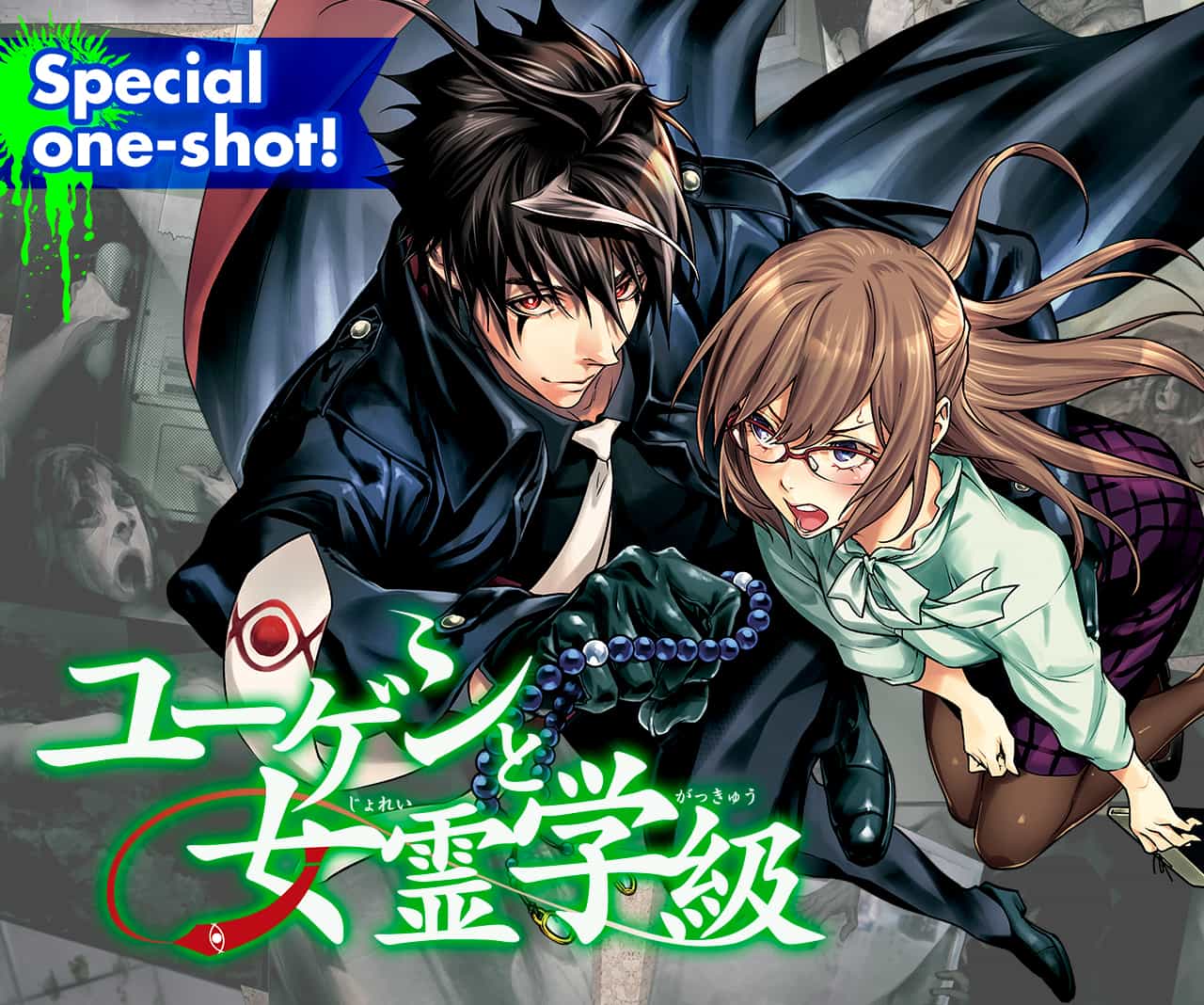 It’s time to look at a one shot in Shonen Jump from a while back. The idea of supernatural exorcists is nothing new but very few have used a school setting like this. Depending on when it came out I wonder if it was trying to capitalize on the success of Assassination Classroom. Well, either way this experiment didn’t really work. The title has potential and solid art but ultimately this did not work out. The main character hurts this series quite massively.

The story starts off with someone asking Yugen to help him with a supernatural situation. He agrees and then we never go back to that plot so it was a completely pointless opening page. The story really starts on page 2 as we’re introduced to Mishiro who is super excited to be a teacher at a very prestigious academy. She will be teaching a year 2 course and it ready to uphold the school name. Unfortunately one student named Saeri has not been feeling very well lately. She has become withdrawn in her house and refuses to go outside. This is bad news for the school.

See, the school is known as a perfect finishing school for young ladies and prides itself on a 100% success rate. They’ve never had a troubled student drop out or anything like that. They’re so desperate that they call in a local counselor who just so happens to be Yugen. Mishiro doesn’t like this because Yugen immediately sets a bad impression as he does not dress professionally and flirts with everyone. Can she keep him under control long enough to help Saeri or is this game over for all of them?

I can see what they are going for with Yugen (As the title throws this in your face throughout the one shot) but it doesn’t work. See, as an exorcist Yugen is completely oblivious to a person’s outside appearance. It’s why he falls for those who are much older and much younger than he is. He looks only to the soul and his goal in life is to one day find a wife. By the end even the main heroine starts to get on his side for that reason which is certainly cheesy and sudden but this is a one shot.

You can’t make a good main character like this though. The flirting kind of character is one I usually dislike and Yugen is no exception. He should be taking his job more seriously and not be flirting while on the clock. Naturally it turns out that he is a genius, but even so that doesn’t excuse him here. He’s easily the worst character in the one shot and since he is going to end up being the main focus, that’s a really bad sign for any future potential here. If you were going to do this kind of trait then the only way it could have worked would have been to make him a high schooler as well. He could just be a teacher because of what a genius he is. That would make the plot of him flirting with students not so bad and you could still have him irritate the other teachers. Of course then you can’t have a possible romance with the teacher but that shouldn’t be here anyway.

In this one shot Yugen quickly takes down the spirit possessing Saeri easily enough. It reminds me of Muhyo and Roji where it’s not really a fight so much as Yugen just pointing at the enemy and taking it down. I assume this would likely change as the series went on but I suppose that isn’t a guarantee. I’m not really sure at this point if the series would have turned into a full action or just been more of an adventure title as each kid has their own issues.

The artwork isn’t bad. The designs are suitably creepy and ominous for this kind of title. It doesn’t look like a brand new kind of series which makes sense since the artist is experienced. I do hope that whenever a spirit is exorcised this isn’t just an excuse for fanservice here as the soul ends up appearing each time. The one shot was fairly reserved so I won’t take that as a point against it for now.

As for the other characters, well Mishiro seems reasonable enough. You can tell her dynamic will be about calling Yugen out every time but always being surprised as his antics end up turning things for the better. Ideally she will be able to do more than that as the series goes on. Then you have Saeri who is the victim here so we don’t get to see her full character much. She seems nice enough though and now that she has learned to break the rules (The moral of the story here) she should be able to keep other spirits from possessing her.

Naturally the one shot does end with a big cliffhanger as more spirits attack and the students are going to be in a tough situation now. At the end everyone’s missing which seems to include Saeri. If that is the case then she is supremely unlucky to have been possessed twice. That or she’s in a different class which is definitely possible. After all it’s not the whole school that has vanished so this is certainly possible when you think about it.

A one shot should be intriguing enough to make you want to read a full series about the premise. That’s the entire point so the question is…did this one pull it off? I would have to say no to that. There is potential here but the one shot didn’t make the best use of that. As far as supernatural worlds go, this one has less to it than most. I wouldn’t say that there is a lot to make the series stand out in any way. As mentioned, it is definitely trying for a Muhyo and Roji kind of feel but without the humor and the main character is a big step down.

The series feels a lot more grounded than other titles as the rest of the characters all seem like normal humans. Of course they could introduce more tough fighters eventually but I don’t see as much potential in this one. Throw in how the main character’s not very good and I have to give this a thumbs down. It’s not a one shot that I can recommend and I can see why it has not gotten a full ongoing at the moment. It’s just not ready for that. 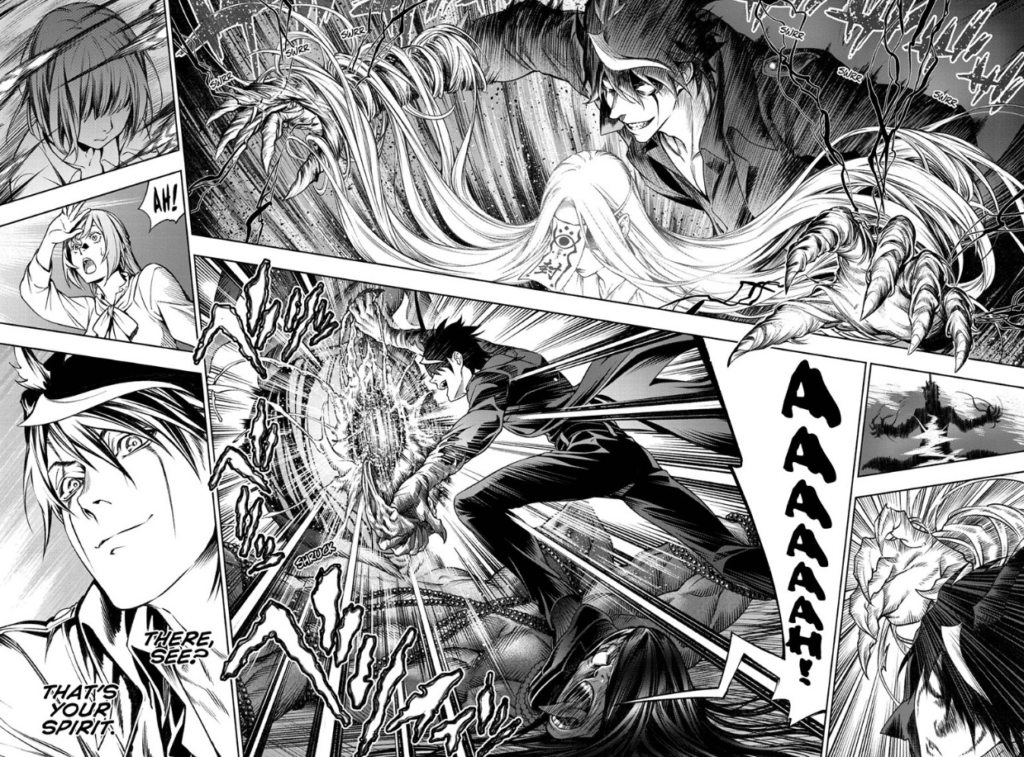 Overall, Yugen’s classroom is already out of session and I don’t think any more classes will be coming up. Perhaps we’ll see more of this title in the future but I have major doubts on that. The art is the strongest part of the story and that’s not really a good thing. Of course I am glad that the art is good but you seriously need way more than that if you want to end up being a big story. That’s just how it goes but as they say, it definitely could have been worse.