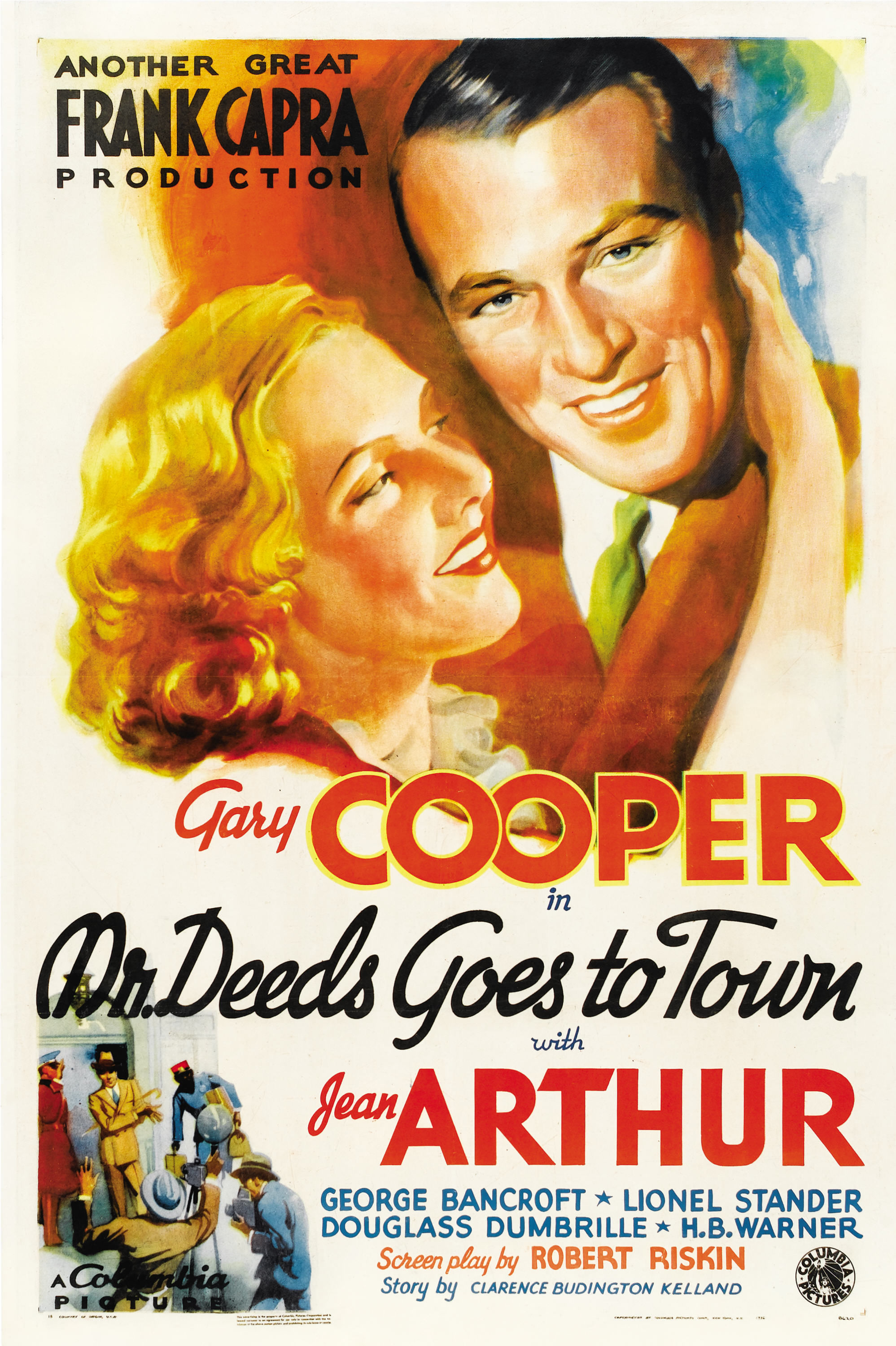 Mr. Deeds Goes to Town is definitely a really fun film about how a guy is given a lot of money and has to quickly decide how to live his life. It’s always hard to know what to do when you get enough money to last for the rest of your life. My advice is to go by yourself a meal at McDonalds with a cookie and then take that time to think it over. Don’t try to consider everything at once and having a good old fashioned meal will be just the trick to get you in the right frame of mind. With a satisfying ending and a good length to allow for every plot to get a lot of screen time, this film really hits all of the right notes.

The movie starts with Deeds’ rich relative dying so the attorney Cedar and his subordinate Cobb show up to the small town where Deeds lives to let him now what’s up. The opening scenes start off with the right tone as an old man gives them the runaround for a while. Eventually they find Deeds and give him the money but Deeds has to head to New York for it. Once there, everyone wants a piece of his money. You have “relatives” showing up to claim their piece of the pie, random people asking him to join their clubs and pay off debts, etc.

The newspapers want some scandals after him too so the editor sends in his big gun: Louise. If there’s any way to get a story out of Deeds then she can do it. She will have to use a lot of deceptions and wits to get to him. Can she succeed? Deeds better watch out because romance has been the downfall for many main characters in these films and it doesn’t help that Deeds tends to create a lot of attention on his own by picking fights.

The whole situation is tough on Deeds in some respects while easy in others. You may initially expect him to get suckered at every turn but he has a lot of good business sense and puts all of the scams in their place. It was nice to see him talk back to everyone and not just give his money away. Usually it seems like the main character isn’t quite so aware of what is going on so that was a really nice change of pace. I immediately gained a whole lot of respect for that guy. With that out of the way he could actually enjoy his riches a little. Deeds never starts being wasteful or anything like that though.

The tragic part for him is that he does want to help out and make this a better place but everyone he meets tends to be mean and cynical. Even Louise who appears to be nice is stringing him along the whole time even if he doesn’t know it. It takes a while for him to meet really nice people and they are always outnumbered. I was expecting him to start going into charity a little sooner though. It seemed like the natural next step for him so I was surprised when that didn’t happen for a while. You do have to be careful how you give your money away of course but I feel like he didn’t really think about this until the end.

Not that you should be expected to just give your money away but he seemed like someone who would probably be supporting a lot of local charities right from the jump. Perhaps he would have started sooner if he wasn’t kept busy by all of the moochers. By the end he’s certainly doing his best. The only thing I disagreed with him on was staying quiet in court. It’s not just his life on the line there after all, but all of the people he was helping as well. If he were to lose then they all would so I would have liked him to have been a little more firm there.

Ultimately the editor of the magazine comes in clutch near the end. I definitely liked that guy, not saying he’s super heroic or anything but he does seem to have a conscience which is something that the other characters mostly lacked. Even Louise was definitely not the nicest person as she wrote all kinds of mean things about Deeds. It’s hard to say she really turned over a new leaf by the end because she fell for Deeds. Does that not imply that she would have kept on going if she didn’t end up falling in love with him? Because that was my takeaway there. I don’t think that was the film’s implication per say, but she has been in the game for a long time and this was the first time she had any issues with her deceptions so I think it works if you put the pieces together.

As for Cedar, well he’s a sketchy character from the start. Someone who will be a great asset as long as your goals align but he will betray you without a second thought. Cobb was really the standout kind of guy you want on your side because he was actually loyal. He’s not the kind of guy who will betray you and he did his best to help Deeds out. Not always an easy job but he always gets it done. The guy also doesn’t act with any pretenses and just calls it like he sees it.

Now the conclusion was always going to be the deciding factor on just how good this film was. Fortunately it is really good so as a result I would give the whole film a big thumbs up. We have a big court case to end things off where every character gets to appear. It was a nice way to wrap all of the threads in as every scene suddenly became important. The random scene where Deeds got drunk, the people he pushed out of his house, etc. Every act he did, both good and bad would reappear at the end of the film. SO it made the court case feel really grand and I thought the trial was handled really well. The characters were all reasonable and it was fun seeing the evidence pile up as you wondered how Deeds would find a way to make a comeback here.

Overall, This was a fun film. Deeds also makes for a solid main character. I think he did let his guard down a little too easily though like getting super drunk and immediately talking about his past with Louise though. The big rule for conversations like this is to always assume that whatever you tell someone will be public knowledge in a moment. Of course you won’t expect it to quite go into the newspaper but all the same you’d think he would be a little more careful. Things worked out by the end though and it was also a practical look at how you can change so many other lives once you become rich. Whether you choose to do so or not is another matter entirely. The writing is strong throughout and so I would recommend this to anyone who enjoys a good story.