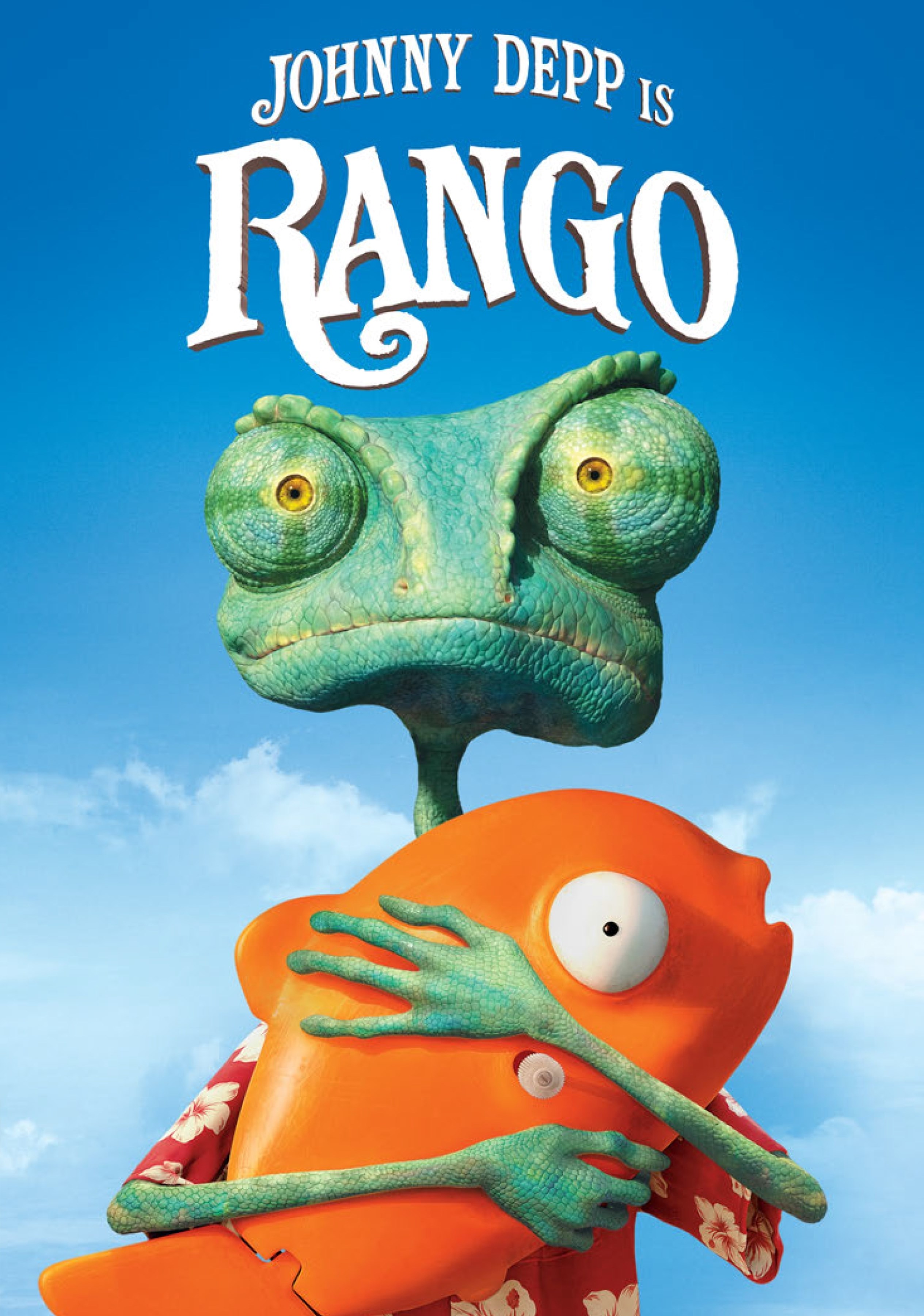 Rango is one of the rare titles where I played the game before watching the movie. To be fair, this may be the best way to do things. Eh, I suppose it’s about the same either way. I wouldn’t say Rango is able to hold its own against most of the animated films nowadays but it’s still decently good. If the character designs were all improved and the bird got to fly away then I think this would have bumped the film up a notch.

The movie starts off with showing us how Rango has slowly gotten to be a bit crazy. It makes sense since there is nobody for him to talk to and he’s basically trapped inside a little jar all day. After a while it makes sense that you would crack under such circumstances. One day he ends up falling out of the family car and is on his own at the desert now. This allows him to have a fresh start so he tricks everyone into believing that he is actually an expert gunslinger and they even make him a sheriff. The position does come with its own set of problems though like the fact that the town is incredibly corrupt and he really needs to be watching his back at all times. One wrong move and he may be down for the count.

Like I said, the film’s main issue at times is that it just doesn’t look great. The animation isn’t bad per say but the style’s really not all that pleasant so films that are decades older end up looking better. This is a film that’s carried more by the writing angle as the graphics are just out of luck. The best animation here is when the bird is flying around after Rango early on. That was fairly intense at least.

The soundtrack isn’t very memorable so we can bypass that. There are a few comic relief villains running around the whole time who aren’t that impressive but the main villain was pretty good. His name is Jake and the guy really knows how to put fear into the cast. They absolutely do not want to mess with him and are pretty much traumatized by the guy. It’s easy to see why as you get the feeling he would crush any of the heroes in a straight fight. I’ll also give the mayor some props here as the guy also had great ambitions on his side and really did well to last as long as he did. In the end the guy almost ended up winning out.

On the heroes side I guess they were okay. First up is Rango and I do like his quick way of talking. The guy’s one of those classic con artists who tries to distract you with how quickly he’s talking the whole time while adding lie onto lie onto lie. He does have a lot of confidence in his own way and is quick to bury his mistakes. I did think he was a fun character. Perhaps not someone you could use as a role model but someone who is a fun character to take the lead. On the other hand along with this comes the fact that he does choke under pressure and can be a bit of a flirt who gets distracted easily. Those qualities end up hurting him a bit.

Then there’s the main heroine Beans who has a glitch within her where she just goes completely still and is unconscious for a little bit. It’s a unique character trait and so I would say that it works pretty well. It does tend to happen at inconvenient moments of course but I would have it no other way. Beyond that I can’t say that she is super memorable though. In a way you’ll remember that trait more than the rest of her character which I would not say is a good thing. Particularly as the main heroine here although it’s fair to say that her role isn’t huge or anything like that. I think the film could have focused more on her and Rango not getting along at all like in the opening and doubling down on that.

The opening villain here was a character I was rooting for though. When the bird showed up I was ready for him to take down Rango so it was unfortunate when that didn’t end up happening. I think he should have survived, burying the bird was a bit much. The scene’s played for laughs and all so it’s not like the movie’s trying to be dark but it still seemed like a bit of a downer.

Ultimately Rango does have a lot of humor built in and I’d say that it ages well. It is a light hearted western kind of film after all and I want to say that just about every scene has a joke in it. Usually this is at Rango’s expense as he messes up over and over again but I guess you can give him some credit for always getting back up again. I’m sure that by now a lot of other characters would have given up. It just goes to show you that Rango was really made of sterner stuff.

Overall, You’ll have a decent time with Rango so if you’re looking for a fun film that you haven’t seen before then this should be up your alley. There’s no reason to watch it over a number of better animated titles out there but if you’ve seen them all by this point then you may as well watch Rango. So it’s more of a half hearted recommendation on my part. Rango is a good movie but I just felt like there were enough things going against it were there is not a whole lot of replay value. You’ll watch it and then it’ll get buried as if it was never around. I still blame a lot of it on the artstyle and to be fair, that should be a big factor to think about in an animated film right? Just throwing that out there but it makes sense if you think about it.