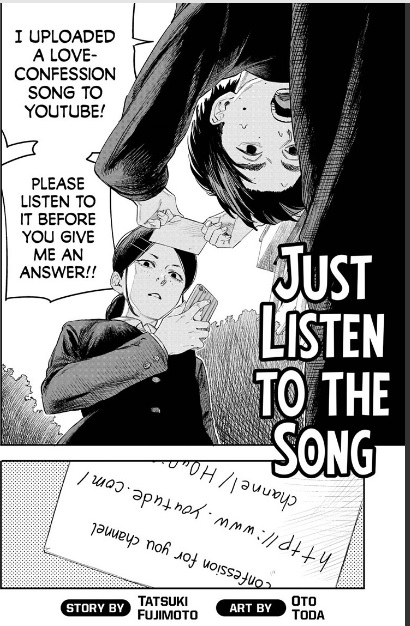 Time for another Shonen Jump oneshot but this one is surprisingly short. It’s barely longer than your average weekly chapter so there isn’t time for much. It’s got an interesting enough premise here that could have been for a longer story so it’s a shame that it ends so quickly. Ultimately it feels like more of a writing prompt than a full adventure and so I don’t think you will really remember this one much in the future. It does show how tough classmates can be.

The series interestingly decides not to name any of the characters. I assume this had to be an intentional choice so I’m curious on why. Is that supposed to be something to ponder during the chapter? Well, either way the story starts with the main guy deciding to confess to a girl that he has liked since middle school. She’s clearly not interested in him so he has one last ditch effort. He uploads a video to Youtube proclaiming his love and asks her to watch it. Unfortunately she sends it to the entire school body and this guy is now a laughing stock. What’s worse is that the video states that God is not real, takes shots at gun laws in America, and there are ghosts in it. This kid’s video is now a global phenomenon and everybody is watching is. What can he possibly do?

Surprisingly there is no big twist at the end, no crazy ending or any of that. I suppose you can call it more of a sad ending or a happy one depending on how you interpret it. Personally I’d consider it a sad ending. I don’t think the girl is going to suddenly fall in love with him or anything like that. She just doesn’t like the guy and things like that don’t really change overnight. Even if she does suddenly decide to get with him, would it be because he’s famous around the world now? There will always be some doubt but I’m going to take the ending at face value here. He looks dejected as she says that the videos are everywhere so I think he’s doomed. She’s just listening to it again to really rub this in his face.

Compared to most embarrassing videos though, I wouldn’t say his rates that high. If anything he should be feeling a little happy about all of the attention. Sure, in the moment it’s kind of sad that everyone got to see you be rejected but once that moment passes then it feels like everything should be goo right? He can turn monetization on and rake up a bunch of cash. Even if he can’t recreate the magic of the videos, he can cash in through other means and quickly stockpile some cash. That’s the best way out of this for him and also the best method of turning this into a positive experience.

It was rude of the heroine to upload this for everyone to see which is also why the guy needs to move on. Perhaps she thought it was harmless fun but it was a big blow to his trust. I was glad that the school was not overplayed with the reactions though. Sure, they definitely poke fun at him and there’s a lot of teasing but it doesn’t go too far. Perhaps that is just due to the length of the oneshot but I thought the reactions were on the normal side. They made sense and were fairly realistic here.

In general this is a fairly laidback oneshot. It’s all a bit sad for the main character while not being too dramatic. The video has a lot of weird things happen to it which is strange but played out as if this was not a big deal. It’s almost like a Twilight Zone episode. You never actually expect that the story will get into how his video could be defying reality by saying something different in each language. You just sort of roll with it and how that affects his life.

The art is fairly good here. The character designs are all clear and you could always tell what is going on. Of course with no action scenes that is not as difficult but it’s always worth mentioning when the art is good. I think the writer should take my advice and make this into a full ongoing. I think there’s a whole lot you could do with this premise that there just isn’t time for in a short story like this.

Overall, It’s always fun reading oneshots like this because it’s cool to see all of the unique premises out there. I’ve read a lot of short stories when I was a kid, but far less manga titles. I’ll always be more partial to long running titles as my favorite since you can then get attached to the characters and setting but a solid oneshot will always hold up well. I think this one was a little too short for its own good and so there’s nothing to latch onto but it’s not bad. It’s just a title that you won’t really think about afterwards, there isn’t much to ponder here compared to the last one.