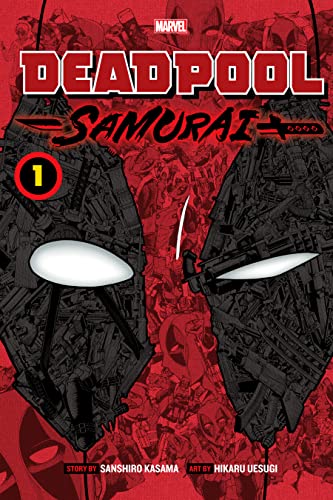 This manga is definitely a pretty unique one that really takes advantage of how crazy Deadpool is. It breaks the fourth wall consistently and we even have some guest stars show up like All Might. It’s a fun read all the way through and it’s also neat to try and see if you can catch all of the references. It’s fairly short but is a fun and memorable ride all the way through. I guarantee that you won’t be forgetting this one anytime soon which shows that the series definitely did something right there.

The series starts with Deadpool being recruited by Iron Man into the Avengers. Now keep in mind that Tony was against this but Captain America felt that it was necessary. Apparently the crime rate across the entire planet has gotten super high and so there aren’t enough heroes to deal with it. That leads to the tough choice of putting a known murderer like Deadpool in on the action. Keep in mind that in this version Deadpool is murdering people on screen while the Avengers debate about recruiting him. It’s all really bonkers the whole time but I guess it shows how desperate they are. They are willing to take him no matter what.

Deadpool’s not really a team player but his services can be bought out so that’s an option there. The main villain of the story is Loki. He’s assembled a team of all star villains that are going to unite their talents to take over the world. Deadpool will need to be the one to stop them along with his Samurai Force but it won’t be easy. Deadpool recruits two girls for the task, Sakura and Neiro. Can the 3 of them really make the difference and save the world?

Right off the bat the series is already throwing in a bunch of references and such as early as chapter 1 so it sets the tone early. I like how Deadpool even mentions how long it can take to draw a page while readers go through it in an instant. It’s true, I can finish a chapter really quick even when it’s very detailed with the artwork. That’s just the way it goes even if it can be a little tragic there.

The humor lands really well which is important. I think a series like this would absolutely fail if the humor was no good but fortunately it never gets annoying or anything like that. I would say instead the manga just feels surreal the whole time and in a very good way. Perhaps if there were a lot of manga like this then it would get old but it feels very unique which is part of the charm. I can’t say I remember another manga that goes as far out as this one.

It can be quite violent but all the scenes tend to be played for laughs. I wouldn’t say that makes the violence itself nonexistent as it can still be extensive but thanks to the context it doesn’t feel as bad as it could have been. It helps that Deadpool is fully immortal as well so no matter how many times he get sliced, the guy just keeps on coming back. He jokes about this a lot as well of course. It’s also interesting having a villain like Deadpool as the main character because he certainly murders a ton of people in his way. He may be working for the heroes but he hasn’t changed his standards at all. He still does what he wants whenever he wants.

Deadpool’s art is also very strong here. The character designs are on point and every character is on model. The style works for both the action and humor scenes. Whoever drew this series put in a ton of effort. It holds up a lot better than you may expect and isn’t some simple franchise-tie in. The art is legitimately great. 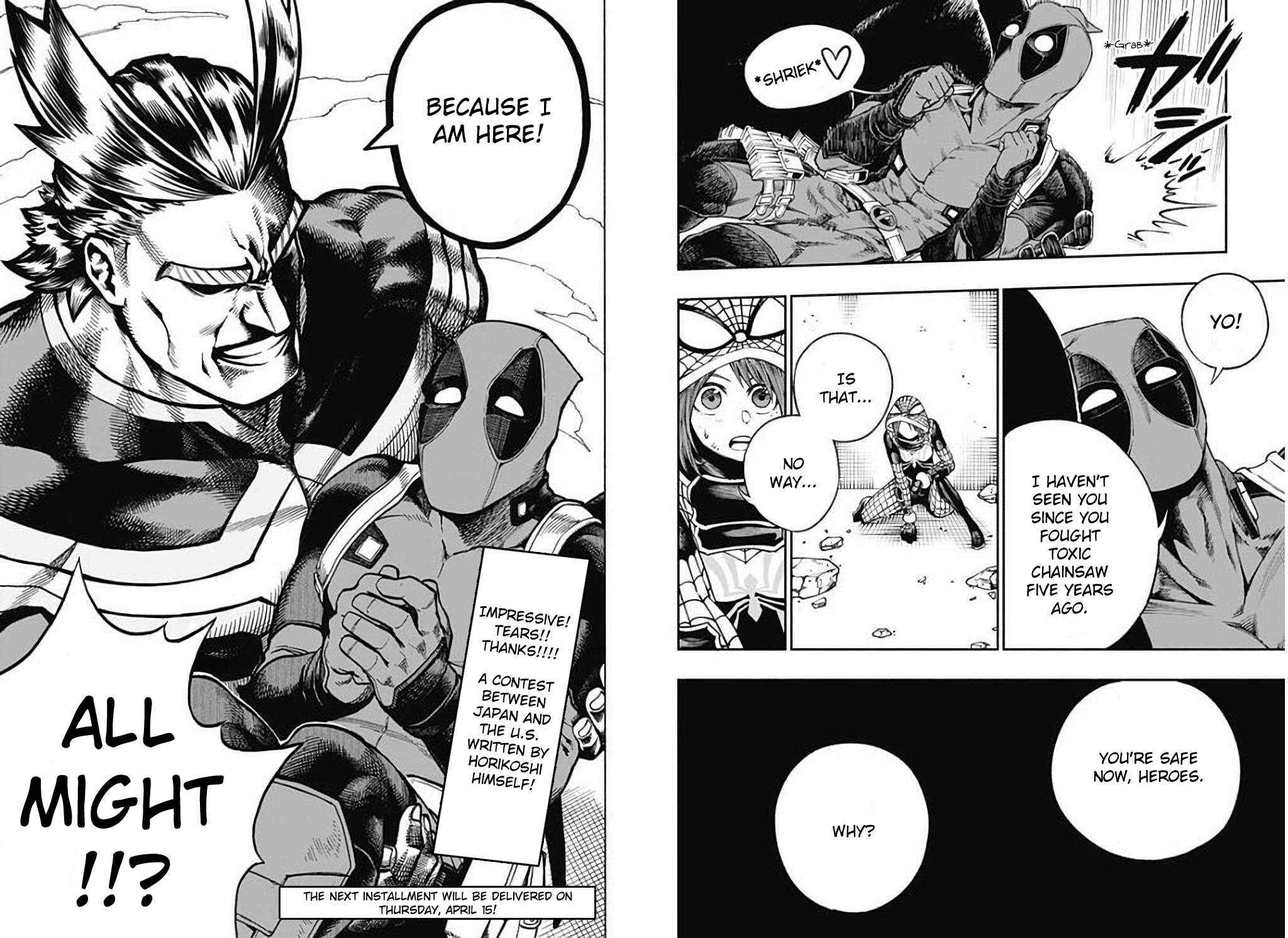 As for the characters, I’ve already talked about Deadpool a bit. If you liked him in the comics then you’ll like him here. He’s always very confident and likes to throw jokes around 24/7. It’s fair to say that he never gets serious here. Even when he is trying to play the part, you know that he’s faking deep down. Things just don’t phase him the way that they do for everyone else and I figure it’s a side effect of being an immortal.

Then you have Sakura who is the first hero recruited to the cause. Her hero name is Sakura Spider and she’s a fun character. Sakura is super optimistic and always really happy so she tries to help make Deadpool a real hero as well. Of course that doesn’t work but it’s a nice attempt. Her humor scenes work really well too and she’s a nice foil to Deadpool who is a lot more jaded which is partially why he jokes around a lot. Having a true hero like her on board is a nice way to keep him honest.

Then you have Neiro as the final member of the big 3. She is the current Venom host and is a popular idol on the side. She and the symbiote have a very good partnership going. She feeds him snacks and he eats up any bad people that approach her. Neiro doesn’t care about murder so much but wants to make sure the symbiote doesn’t eat too many fans so that at least keeps him from eating a bunch. Her role never gets as big as Sakura’s and she ends up missing the climax but I had fun with her. The series did good with the two original characters for the series since they were both fun. The writer was really solid here.

As for Captain America, he’s definitely quite naïve here as that part of him is played up a whole lot. It’s part of the humor of course but his choosing Deadpool was not a smart move if you look at just about any aspect of it. It could also hurt the Avengers’ reputation. Iron Man’s role is smaller but he does get to land a petty attack on Deadpool near the end and openly voices how he doesn’t like the guy. So I like how bold Iron Man is, he speaks his mind and doesn’t care what the others think.

As for the villains, the only real big one is Loki. Sure he summons a bunch of others but they’re basically mindless minions. Deadpool and friends make quick work out of them. For Loki it was fun to find out the true reason behind why he’s causing so much chaos. In true Deadpool fashion the reason will come out of nowhere and be a little crazy. You can count on that. Loki does his best to be really serious the whole time so I’ll give him props there. Deadpool is always trying to psyche him out but it doesn’t work.

While his role is fairly small, Thanos shows up too which is fun. It leads to his famous battle against All Might which was a big thing back then. It’s probably the most memorable scene in the whole manga because of how out of the blue it was. I’m glad to see All Might getting his props here. It also showed just how much effort the series was putting in to really make it break the fourth wall all the time. Thanos and All Might fans should be pleased at how it all turns out.

We also get double Deadpool action later on and even a reference to the Wolverine prequel. That was pretty neat. I can still remember how everyone was outraged at his role there. Look, the design was definitely not very good but at least his abilities were impressive and he worked as the final boss kind of threat. I suppose at this point he will always be known as the worst incarnation of the character though.

If we do get more Marvel manga, I hope they can take place in the same continuity. Build up some kind of mega Marvel multiverse for the manga. That would be a lot of fun. Whether you’re here for the action or comedy you’ll want to check this one out. I dare say it’s one of the funnier manga I’ve read as of late along with Mieruko-Chan. Humor is something that can always be hard to land so I have to give the manga a good shout-out for pulling it off. It ain’t easy!

Then the action scenes are legitimately cool. Even while Deadpool is joking around, you have solid choreography and the fights aren’t too short. You have time for the characters to really trade blows and go all out. It also goes back to how the art here is really good. I’m still surprised at the level of detail that went to it. Choosing Loki as the main villain may have been a little overdone since the guy is constantly the main villain everywhere but he works out well enough. His powerset always makes him a good choice as the villain. 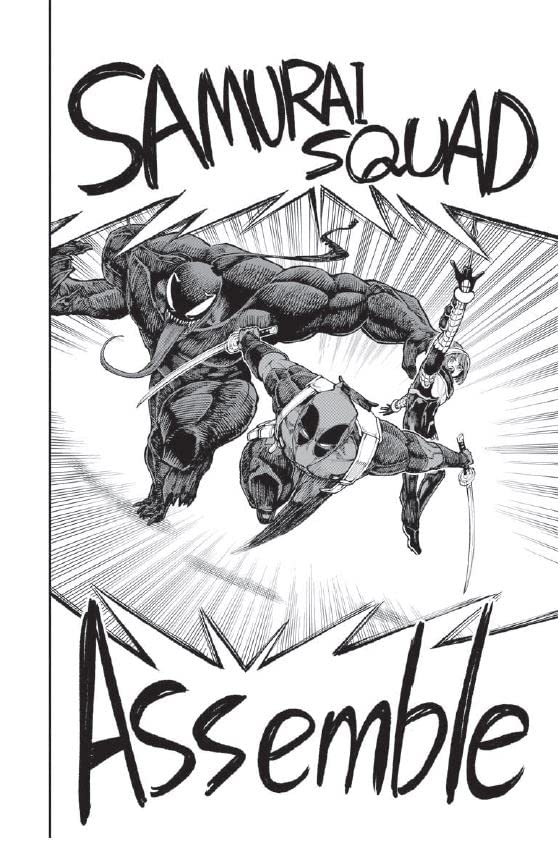 Overall, Deadpool: Samurai is a lot of fun. It’s a shame that so many series end early like this, I think this had potential to be a really solid, long running series. Certainly there are more things they could have done with this premise instead of just ending it all. Give us more references, fights, and all the hype. Hopefully they continue making more Marvel manga in the future. There are so many heroes and stories you could tell in this format. Either way I would definitely recommend this one. It can get a little violent but as long as you read it in a comedy context you should be good.