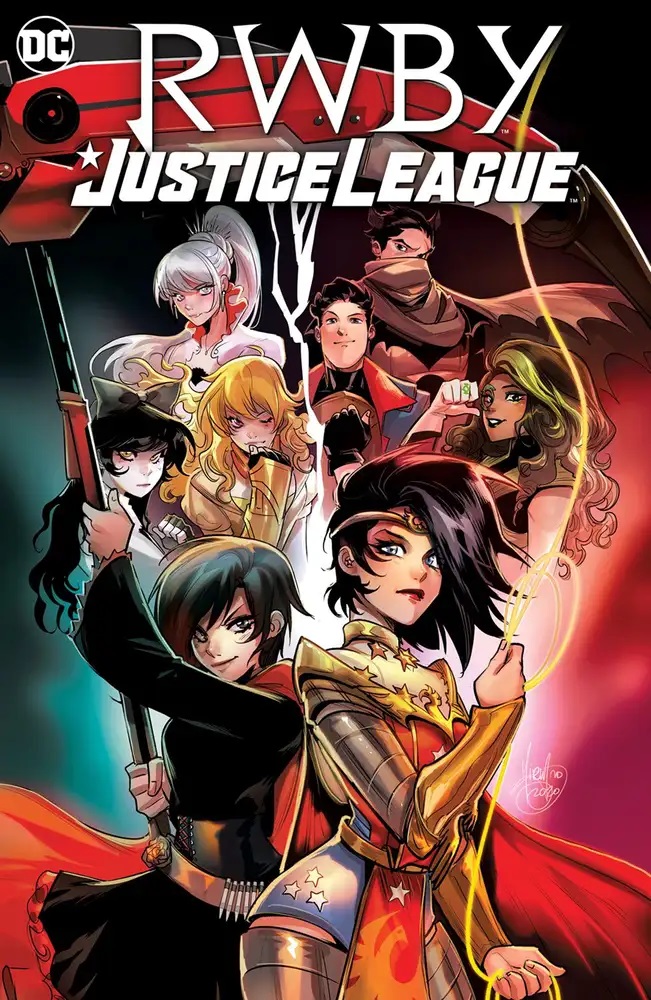 It’s been a long time coming, but I finally got to check out the RWBY crossover event. It takes things in a very different direction than I was expecting though and I don’t think it works out as well as it could have. Doing a straight crossover would have definitely been the best bet. Still, it’s nice seeing the RWBY characters in a new adventure, that’s always a positive at least.

The story starts with the gang meeting up with Superman. He’s only recently been in town and his semblance is fairly powerful. As long as the sun is up he can do just about anything. Meanwhile Weiss meets up with Bruce Wayne who is rich and fairly good at cracking puzzles. That’s a good thing because people with powerful semblances are being targeted by someone and the heroes have to get to the bottom of it quick. Will they all be able to team up and put a stop to this?

Right away the main issue here is that instead of meeting the real Batman and Superman the heroes are meeting teenage versions of them who have semblances. Later on in the story we get a bit of a multiversal approach thanks to Jessica Cruz showing up but instead of making this a plot point at the end, it should have just been a classic crossover. Have a portal open and the Justice League fall out of it or something like that. Part of the hype in crossovers is seeing all of the interactions between characters but it doesn’t really count if they aren’t the characters that you were expecting.

Like if it was in the Justice League world and they met with an anti-hero named Ruby Rose who was some kind of huntress. It wouldn’t really be the same because it’s a totally different version. So this crossover completely squanders the crossover aspect of the crossover and has to survive as a stand alone story after that. It does to a decent extent but even then I wouldn’t call it a very good comic. For starters, the series seems more intent on having a lot of shipping and such over the actual plot.

At times the plot feels more like a backdrop than the focus. We have a little investigating as all of the heroes split up and everything but there isn’t really a huge focus on the whole thing either. The heroes eventually stumble onto the main villain and then we get a quick fight. It’s not particularly engaging though. It’s not boring but you’re never all that invested in the story and I feel like it’s because there are 0 stakes. Yes, people are being kidnapped and all but there’s absolutely no sense of danger. It feels more like a filler episode than a big adventure.

The art also isn’t very good. The details are not on point and it doesn’t feel like a whole lot of effort was put into the whole thing. The characters can go off model but mainly the faces are the issue. None of the action scenes are all that good and it feels like once again, RWBY got the short end of the stick here. More often than not the art isn’t great for the series and this is another example of it. I’m not saying it had to look 5 stars but a little better would have been good.

Now while this all sounds pretty bad, I do want to say that this isn’t a bad comic. It’s still got some good moments in there but you see all of the wasted potential and can’t help thinking about it. This could have been a really great comic and instead I would just call it good with almost no replay value. Seeing the RWBY characters is mainly the positive here like Yang being tough and Ruby getting to take charge. I wouldn’t say the DC characters look great though. Superman acts way too timid at times and Batman’s flirting way too much.

I guess that’s part of the problem of being Bruce Wayne 24/7 with no Batman persona to back him up. The decision to make Wonder Woman more of a total robot was definitely an odd one. I wasn’t expecting that but it’s not bad, just felt very random. The main villain at the end is okay but he wouldn’t have been my first pick for a DC villain because he’s basically mindless. Not completely or anything but you’re not going to get any fun dialogue out of him or quality banter. He’s just kind of around as an enemy to defeat. There’s just not a whole lot to do there. The best DC character here would probably be Jessica Cruz. I don’t buy her being stronger than Superman ordinarily but I can accept it in this version where he is totally reliant on his semblance and her powers still appear to be fully normal.

I guess another good thing here at least is that Team RWBY shows up the Justice League. It may be a small consolation since this JL isn’t even really a team or look all that impressive but I’ll take it. Team RWBY should have way better teamwork than the JL because they’ve always been a unit and it shows here. So I’ll take the wins where I can get them.

Overall, If the writing was better and we had a good story then this would have gotten a lot farther. As it stands this feels like a bit of an official fanfic with no real substance and weakened versions of all the characters. It’s a fun enough story for when you need some more RWBY content but I definitely hope the movie has a very different plot here. I need a true crossover with a lot of quality action and hype moments. Check this one out if you want a low key adventure where the characters get to talk with some DC inspired fighters. Otherwise it’s back to waiting for the next TV show volume!