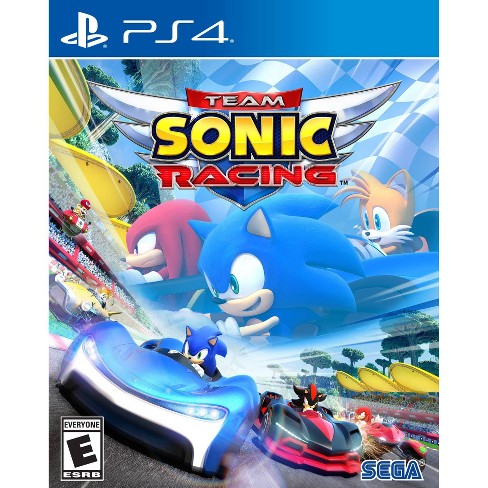 Sonic has returned with another racing game! I think that means he now has 7 which is really impressive. (3 Riders, Sonic R, 2 Sonic and Sega racing, then this one) He is all about speed though so in a way it does make sense. While I think the gameplay for the Sega racing titles is a little bit better, I appreciate that this one has a real story and full voice acting. It’s nostalgic seeing all of the old Sonic characters running around here.

The story starts with a new character inviting Sonic and friends into a big racing event he’s hosting. The guy even sent invites to the future and to other dimensions so that Blaze and Silver can compete. Most of the characters think something real funny is going on but Sonic is just interested in the cars. Now he can really test his speed skills so he goes to work on challenging Shadow. Will things end okay or has he underestimated this guy?

The story is surprisingly long for a racing game which is pretty nice. It took me two days to complete but I put in several hours of work on each day. There are 7 chapters so around 7 hours sounds right. There are a bunch of levels to play outside of the main story and they probably all have cutscenes so that’s good for replay value. Basically there are different routes you can take to get to each chapter and so I chose the most direct option each time. I figured that made the most sense right? It’s nice to see that the game has the replay value at the ready though.

There is also the matter of obtaining the PS4 trophies but those looked rather difficult to get so I don’t think that I’ll be spending too much time on that for a while. Maybe I’ll grab a few here and there though just to increase my overall average. The character roster is a little on the small side but we have Sonic, Shadow, Silver, and Metal Sonic so as long as I have my hedgehog squad then we’re set.

The graphics are really nice. The game definitely looks modern and they did not waste the budget here. This has the look of a modern Sonic title even if it doesn’t quite have the detailed story or length you would need to be a big one. Where the game really shines though is the soundtrack. There are a ton of great remixes here. The lyrical song at the beginning also sounds like the BioLizard track just with different lyrics. There are so many great songs to listen to here that you will definitely want to play them on Youtube afterwards. This way you can really listen to them since you don’t have to worry about the track.

As for the gameplay itself, it’s your classic 3D racer. You have to drive as fast as possible in order to get to the end of the stage. If you’re in first then you have probably won but it actually depends on your two teammates. If they finish too far in the back then it brings your average down and you could actually lose. Not much you can do to help them though so just focus on getting to the front. You can throw items forwards and back but one new mechanic is that you can give your items to a teammate.

Doing so increases your final smash gauge and then you can activate that to move at super speeds for a little while. It’s really a great deal so I recommend doing that as often as possible. I would just give all my items away to be honest because it’s not like they were helping me all that much on my end. The item are surprisingly weak so often times they won’t have much of an impact on the battle at hand.

Some levels will be a little different though like you have to smash robots or rings as you go to the end instead of it being a pure race. It’s an interesting way to shake things up I’ll give you that. In general I preferred the races but I understand how this could be seen as a fun change of pace. It does ensure that you are trying out different things. I took the chance to also switch characters a few times. Mainly I stuck to Sonic and Shadow but it was fun hearing the other characters from time to time.

I can’t stress enough how great it was to have full voice acting here. Even just hearing them talk during the races or in the mini cutscenes was fun. Voice acting is always a good way to take a game to the next level and it makes everything feel more grand. The story itself was rather low key but the voice acting made it a lot more fun. If I was the devs I would have made Super Sonic playable in the last level and made the villain a bit bigger but in the end I’m just glad we had a true story like this. We even had a bunch of old characters show up to have fun with the group.

My gameplay tip would be to drift as often as possible. You can get a ton of little boosts that way. Also, give all of your items to your partners so that you build up your meter as soon as possible. From that point, make sure to check where you are in the race. If you have enough time to get a second final attack then use it, but otherwise save it until near the goal. That’s usually the best way to ensure all 3 members of your team make it at good spots in the race.

Overall, Team Sonic Racing is a great racing game. It does get a little overshadowed by Mario Kart as with all racing games at this point but I’d say this one can still hold its own as a side game. I wouldn’t say that it actually beats Mario Kart or anything like that as that game is still way more polished but a good amount of effort was put into this one as well. It doesn’t just feel like some low budget clone or anything like that. The game went all in and I’d like to see more Sonic racing games in the future. In the meanwhile the game is rather cheap now so this is a good chance to pick it up.